Researchers have found the broken tooth of one of the largest carnivores ever to stalk the Earth.

No, it isn’t T. rex. It isn’t even a dinosaur. Rather, the tooth belongs to a rare and mysterious species of giant ichthyosaur – a flesh-eating marine reptile that patrolled the world’s seas during the late Triassic period, about 205 million years ago.

Though the crown of the tooth is partially missing, the fossil fang’s root is twice as wide as any other ichthyosaur tooth known, according to a new study published April 28 in the Journal of Vertebrate Paleontology.

The previous record holder for largest tooth was an ichthyosaur measuring nearly 50 feet (15 meters) long, the study authors said – possibly making the owner of this newly described tooth one of the largest animals ever to live on land or sea.

However, because scientists only have half a tooth to base their research on, it’s impossible to tell whether the ancient marine reptile was a true leviathan, or simply one of many similarly sized sea monsters that ruled the Triassic seas, the researchers said.

“It is hard to say if the tooth is from a large ichthyosaur with giant teeth or from a giant ichthyosaur with average-sized teeth,” lead study author P. Martin Sander, of the University of Bonn in Germany, said in a statement. 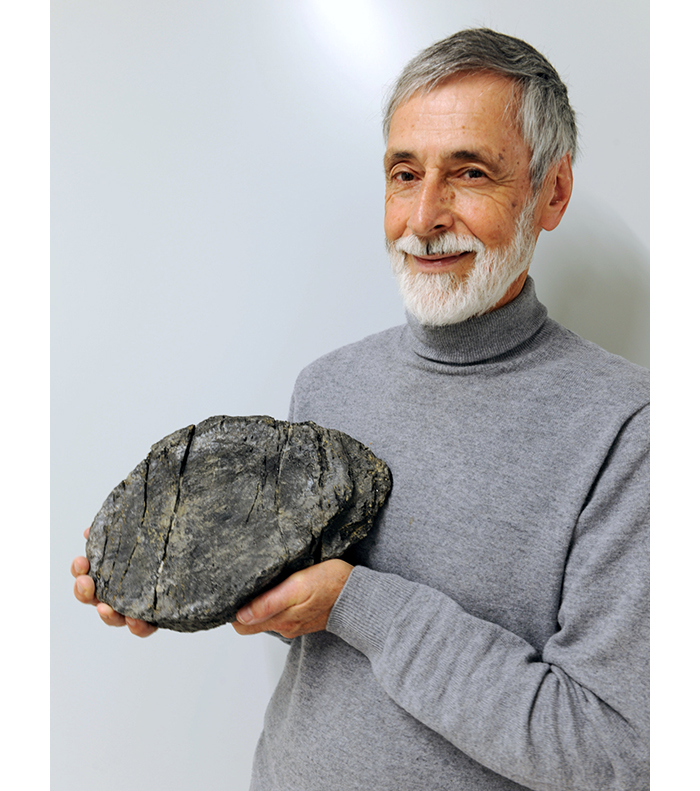 Monsters of the deep

Ichthyosaurs, whose name translates to “fish lizards,” emerged during the middle Triassic period (about 252 million to 201 million years ago) not long after the end-Permian extinction wiped out roughly 95 percent of life in Earth‘s oceans.

The aquatic reptiles did very well for themselves in these changing seas; within about 5 million years of their first appearance, ichthyosaurs ballooned to enormous sizes and dominated all the world’s oceans, the study authors wrote.

The largest known ichthyosaur is the Shastasaurus sikanniensis – a whale-like creature that measured up to 69 feet (21 m) long, and possibly longer.

Artist’s reconstruction of an ichthyosaur. (Marcello Perillo/University of Bonn)

For comparison, modern blue whales generally measure between 80 and 100 feet (24 and 30 m) long, while the carnivore king T. rex measured an average of 40 feet (12 m) long, according to the American Museum of Natural History.

Many large ichthyosaurs, including the gargantuan Shastasaurus, seem to have become top predators without ever evolving teeth, according to the researchers. Only one species of giant ichthyosaur – the 50-foot-long Himalayasaurus, discovered in Tibet – is known to have had a mouth full of teeth.

So, when scientists discovered a single large fossil ichthyosaur tooth in the Kössen Formation of the Swiss Alps – a 9,200-foot-high (2,800 m) rock formation that existed at the bottom of a Triassic sea – the team had a bit of a mystery on their hands.

The root of the ichthyosaur tooth is 60 mm wide. (Rosi Roth/University of Zurich)

In the new study, the researchers analyzed that fossil tooth in detail, along with some large ichthyosaur ribs and vertebrae, all discovered in the same Alpine formation between 1976 and 1990. The team compared the sampling of bones to other giant ichthyosaur fossils with more complete skeletons, in order to estimate the size and species of the new specimens.

Measuring about 2.3 inches (60 mm) wide at the root and 4 inches (100 mm) tall from the root to the broken end of the crown, the fossil tooth is twice as wide as any known Himalayasaurus tooth, the researchers said.

The unique pattern of dentin – the hard tissue that makes up the bulk of reptile and mammal teeth – proves that the tooth belonged to an ichthyosaur, but the fossil’s extraordinary size doesn’t fit with any known species.

If the creature’s body was significantly larger than Himalayasaurus, as the tooth seems to suggest, then researchers could be looking at the largest ichthyosaur ever discovered.

“These late Triassic giant ichthyosaurs clearly were among the largest animals to ever inhabit our planet,” the researchers wrote.

However, given that only a few bones remain of each specimen, it’s impossible to reliably categorize them as a particular species.

Measurements of the bones may also be slightly skewed, as several of the fossils appear to have been squashed by the movement of tectonic plates that raised the Alps out of the sea over hundreds of millions of years, the team said.

For now, the researchers have assigned the three specimens to the family Shastasauridae – the same family of the giants Shastasaurus, Shonisaurus and Himalayasaurus. Whether or not the specimens dwarf those other goliath sea monsters is a question that cannot be answered without more fossil evidence.

In images: Graveyard of ichthyosaur fossils in Chile

Triassic dinosaur with giant ‘murder feet’ wasn’t so big after all, scientists find

This article was originally published by Live Science. Read the original article here.