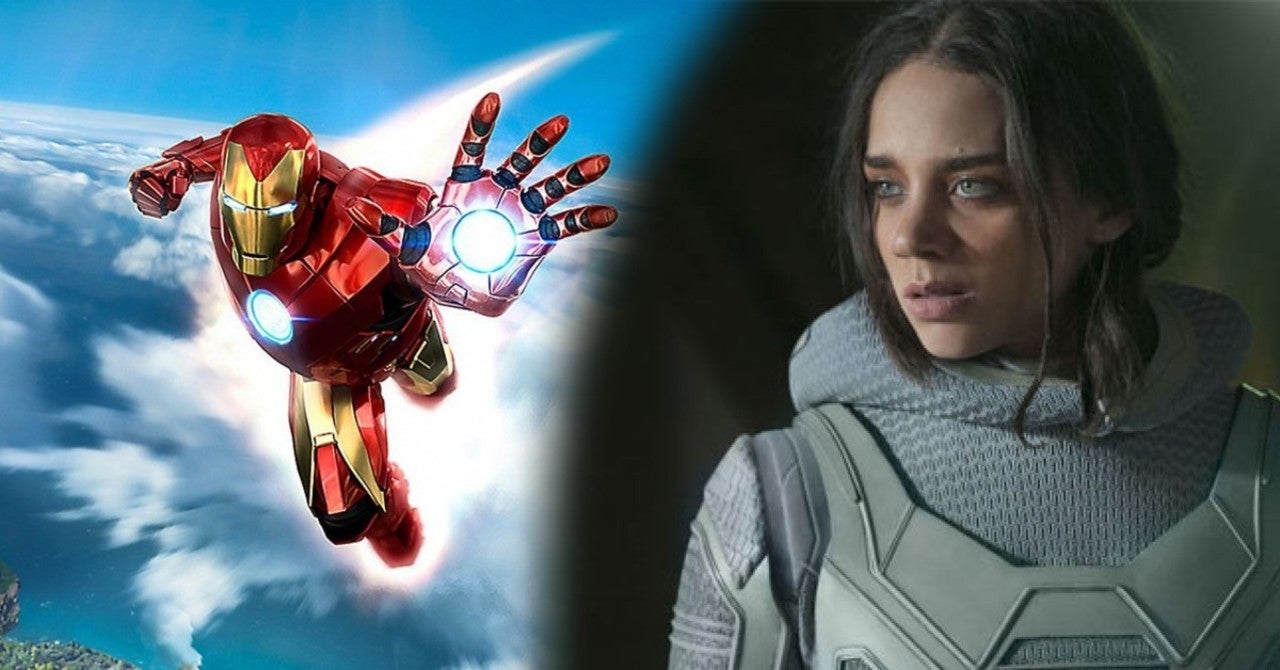 Marvel’s Iron Man VR has been in development for longer than five years. Finally arriving on PS4 on July 3, the game will offer Tony Stark fans the opportunity to suit up as the Armored Avenger, take flight, and do battle with a villainous Ghost. While Ghost is not an uncommon villain to Iron Man on the pages of Marvel Comics, the character has not exactly been a household name, especially before Ant-Man and The Wasp highlighted Ghost as a villain with Hannah John-Kamen in the part. As it turns out, the gender swap from male to female for the villain on both adaptations of the character, let alone the use of the character at all, was wholly coincidental.

“Marvel gave us a lot of creative freedom in terms of the type of Iron Man story and Tony Stark story we wanted to tell,” Ryan Payton, director of Iron Man VR for Camouflaj, told ComicBook.com. “It came to the question of who’s going to be our main antagonist…I remember flying down to LA, meeting with Bill [Rosemann] and other colleagues over at Marvel Games, and we said, ‘Bill, can you help us figure out who our main antagonist is? We need a villain who would resurrect Tony’s old weapons, who would hack them to push them against Tony, and haunt him for his past transgressions.’ It almost sounds like it was out of a TV sitcom, but I swear to God, I remember Bill looks over to a bunch of these other guys over at Marvel Games and they all at the same time said, ‘Ghost.”‘And that was it.”

This moment of clarity from the entire Marvel Games team, simultaneously billing Ghost as the perfect villain for that description, came before they had any knowledge of Peyton Reed’s movie using the character in the Marvel Cinematic Universe. “At the time when we suggested Ghost, this was before Ant-Man and The Wasp, so we were like, ‘Oh, great!’ Here’s this villain who, to me, is one of Iron Man’s quintessential foes but yet hasn’t been seen in the film yet,” Bill Rosemann, VP & Head of Creative at Marvel Games explained. “We said, ‘Oh, Ghost! We can introduce Ghost to the world. Ghost is a great Iron Man foe, so this will make it feel different.'”

The coincidence runs deeper than simply choosing the character as a villain. Both the creative team behind Ant-Man and The Wasp and behind Iron Man VR chose to feature Ghost as a female character, operating wholly independently of each other while making such a decision.

“The depth in the currently-told Marvel stories are that you can’t take a hero out and just plug it in another hero; the setup and the antagonist need to be personal to the hero,” Rosemann goes on. “For all of those reasons, we were like, ‘Ghost. Go with Ghost.’ Then it was Ryan who came back and said, ‘We were looking at cast our characters.’ At the time, it was a lot of men, and Ryan very smartly said, ‘Hey, Marvel has a history of being very inclusive and diverse, and we want to keep adding to that. We want to add female characters to the adventure.’ He said, ‘Could Ghost be female?’ and I said, ‘Yeah,’ because in the comics, you really never know who Ghost is. Ghost is anonymous, so the gender of Ghost is not important, it’s the character of Ghost. Then we saw Ghost appear in Ant-Man and The Wasp, and Ghost was female. So, great minds think alike.”

As the story goes, Ghost was introduced to mainstream audiences in the Marvel movie, but the game will offer a different take on the character and one which fans will experience through the VR gaming set up. “One of the coolest things about Ghost is how does Tony fight a foe he can’t hit?” Rosemann explains. “Often, it’s not just a matter of punching or blasting Ghost with your repulsor rays because Ghost can turn intangible. Then the idea of hacking and controlling things, that’s all about… Ghost is this awesome anti-corporate hacker, and that’s the other extra great-character level with Ghost, is Ghost doesn’t have a desire to conquer the world. Ghost wants to tear down corporations and, specifically, Ghost hates Stark Industries. That makes it a perfect Iron Man foe.”

While the game may include appearances by other beloved Marvel Comics heroes, or at least references to them and the larger Marvel universe hopefully leading into future VR endeavors, the key to the process as Marvel Games is balancing a plethora of highly anticipated titles is collaboration.

“It’s collaboration. That’s the name of the game. It’s all collaboration,” Rosemann says, as his Marvel Games brand currently has Marvel’s Avengers, Spider-Man: Miles Morales, and Marvel Realm of Champions on its horizon. “[Iron Man VR] is Camouflaj’s game. We are doing everything we can to help them, but it’s their game, it’s their story, so it’s all collaboration. So, when it comes to antagonists, we always ask the question: What do you want to achieve? What role do you want the antagonist to play? How does the antagonist connect to the gameplay and to your theme? When you add all that together… We also desired not only make it authentic to Iron Man, but, again, we want to offer something that hasn’t been seen before on a big stage like this.”

Are you excited to experience Iron Man VR? Share your thoughts in the comment section or send them my way on Instagram! Stay tuned to ComicBook.com/Gaming throughout the week for more info from our conversation with Rosemann and Payton leading up to the release of Iron Man VR!