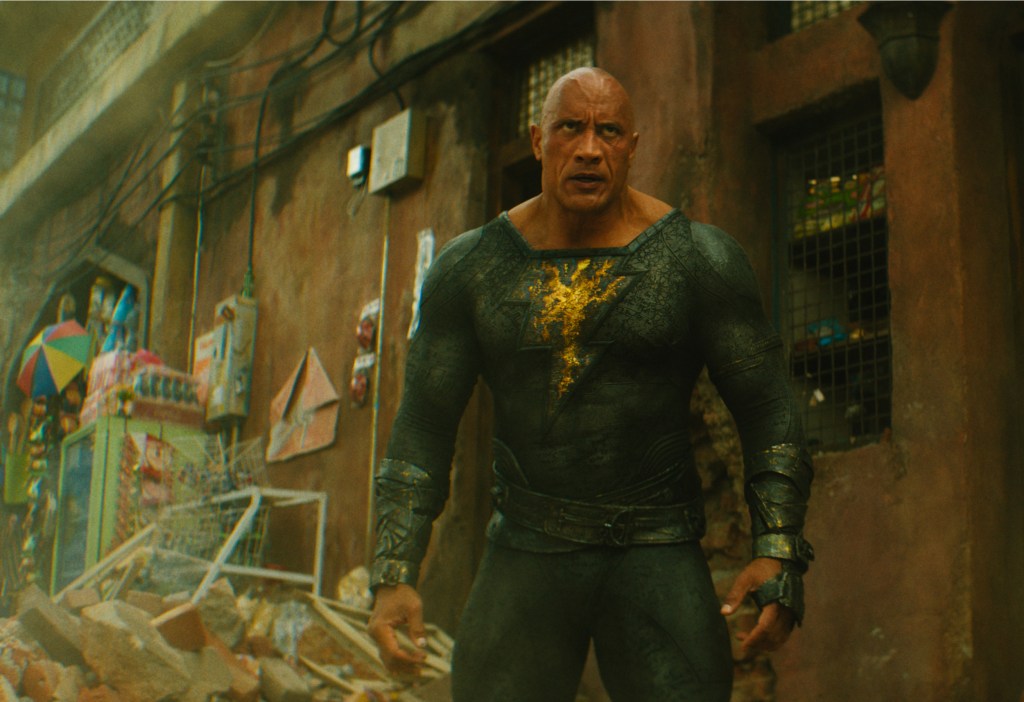 There’s some snarking going on out there that Black Adam is poised to lose $50M-$100M, and that is simply just not true. Deadline film finance sources, meaning people who do this for a living and those close to the film say this movie is bound to break even and be in the black. Scroll down to see how. With a global gross of $390M, a $195M production cost and a P&A spend between $80M-$100M, the Dwayne Johnson DC/New Line film is looking to net between $52M-$72M.

Also not included in that amount, is an extra source of cash from Black Adam merchandise.

All of this, including a B+ CinemaScore, is good enough for Black Adam to be a franchise starter (read the first Captain America made $370M WW), with Black Adam 2 and a Hawkeye spinoff already being mapped out by Johnson’s Seven Bucks. Note, the franchise will come to a greater realization once newly installed DC heads Peter Safran and James Gunn unveil their plans early next year.

Black Adam repped Johnson’s biggest solo opening stateside at $67M, clearly one of the financial models that Warner Bros. finance department had in mind when they were strategizing the P&L on this film. In a very dry fall marketplace without any tentpoles due the post-production logjam created by Covid, Black Adam was the biggest movie of the season notching No. 1 for three weeks in a row around the world before Disney/Marvel Studios’ Black Panther: Wakanda Forever arrived.

“I have read the claims that Black Adam will lose money. That is false,” exclaims producer and financier Joe Singer who deals greatly in motion picture slate financing, “The picture may be considered disappointing since it had Dwayne Johnson in a DC film.  However, the picture will pass break-even and throw off a bit of profit.”

Was Black Adam as big as Hobbs & Shaw, which yielded an $84M profit after all ancillaries? No, but you need to remember that the Fast & Furious spinoff had Russia, and didn’t face the headwinds of a strong dollar overseas. Hobbs & Shaw also had the benefit of China where Johnson is big, the pic making $201M (note the theatrical rental return back to the U.S. is only around 25%, and there’s no home market in the PRC). China has sidelined several U.S. blockbuster titles in the wake of Covid. These factors couldn’t have been forecasted when Black Adam was greenlit.

However, working in Black Adam‘s favor is a thriftier marketing budget to Universal’s $140M push of Hobbs & Shaw. How is that? There’s been some intense cost crunching going on at Warner Discovery which is mired in debt and going through rounds of layoffs. Black Adam put the bulk of its spending in digital marketing over linear, teed off by Johnson’s massive social media bullhorn which has a reach of a near half billion followers across TikTok, Instagram, Twitter and Facebook. Also factor in shorter theatrical windows nowadays on movies which enables the studio to stretch their marketing dollars. PVOD for the film is hitting at a time when the pic is still in theaters and outdoor ads are still around. Black Adam is dropping on HBO Max on Dec. 16, after a 57 day window, a long enough frame to maximize theatrical, PVOD and sell through dollars. The swing factor in the net profit here on Black Adam: Warners contends they spent $80M global P&A, which would get the pic to a $72M surplus, whereas the $100M contended by other sources lands the pic at a $52M profit.

I understand that Johnson’s deal wasn’t as aggressive as his previous deals (read Red Notice). He received his $20M upfront fee, and stands to profit according to our numbers which is at cash breakeven zero. There’s a 40% profit pool shared by director Jaume Collet-Serra, the pic’s producers Beau Flynn and Seven Bucks, talent and Johnson, who is the largest participant at more than 10%. That comes out of the net $52M. This shared pool goes into effect after the studio breaks even. No one on Black Adam received first dollar gross per our understanding.

The production cost of $195M includes studio interest charges which are at a low corporate rate of 2%. Residuals and home entertainment costs are rolled into total costs for the film of $338M. The fee that Warner Bros pays itself to send the pic to HBO Max is included in Home Entertainment revenues of $86M. At this gross level, domestic pay TV, which is PVOD, yields $36M.

“Sequel and franchises are the life blood of our business,” adds Singer, “They have a reduced risk profile and generally a higher upside.  The fact that there are discussions about a Black Adams sequel is how a studio builds long-term sustainable value.”

It Cracks Anna Kendrick Up How Twilight Stars Went From Heartthrobs To ‘The Butt Of Every Joke’
The Good Doctor Season 6 Episode 10 Review: Quiet and Loud
Yung Gravy Sued by Rick Astley for Copying ‘Never Gonna Give You Up’ Voice
‘Onyx the Fortuitous and the Talisman of Souls’ Review – Endearing Comedy-Horror Embraces the ‘80s Horror Kid
Astronomers Just Discovered a ‘Bear’ on Mars