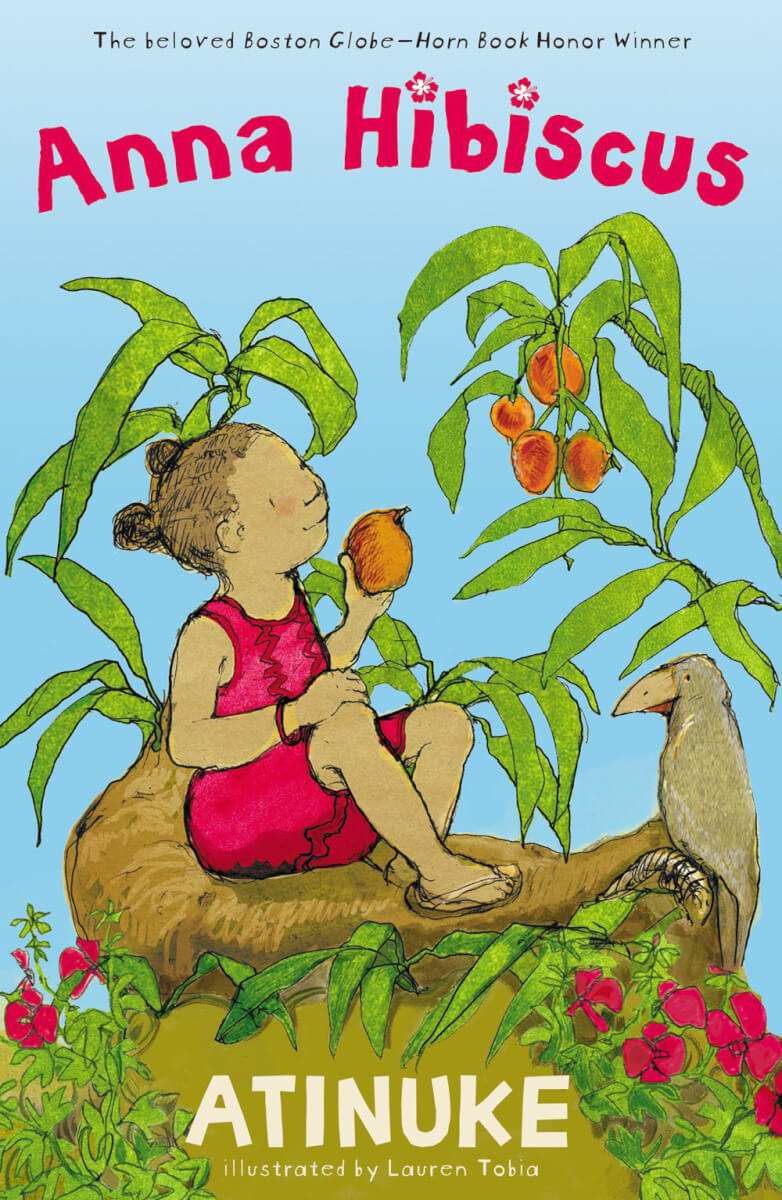 Atinuke (Too Small Tola, Catch That Chicken!), the acclaimed Nigerian-born author of Anna Hibiscus, is an accomplished traditional oral storyteller. In this illustrated chapter book, it’s easy to see why: Using straightforward yet elegant prose, she creates a sweetly moving and eminently memorable young protagonist.

Anna is a bright, active girl who lives with her grandparents, aunts, uncles, cousins, siblings and parents in a sprawling compound in a big, bustling city in Nigeria. The compound is a wondrous place with unusual architecture, lush gardens, fragrant mango trees and goats and chickens. There is always someone to play with, talk to or even—when the cheerful noise and spirited bickering of such a busy home becomes overwhelming—hide from for a little while.

Each of Anna Hibiscus’ four self-contained chapters begin the same way: “Anna Hibiscus lives in Africa. Amazing Africa. In a country called Nigeria.” This refrain highlights Anna’s pride in her identity and her homeland. In Atinuke’s quartet of tales, readers are drawn into Anna’s “amazing” world, where they join her on a trip to the beach, meet her supercool auntie who lives across the Atlantic Ocean and learn what it’s like to sell oranges on the street. Anna is smart and engaged in her family’s life, and each story showcases different ways to express love and understand new perspectives.

Although Lauren Tobia’s illustrations are done in pen and ink with a gray wash, the people and events she depicts always have a feeling of cheerful vibrancy. Mischievous children tumble across the pages, and framed snapshots (complete with little pieces of scrapbook tape) capture scenes of Mother’s life growing up in Canada, where she met and married Father as he visited one summer.

Whether they share Atinuke’s stories aloud with a grown-up or pore over them quietly by themselves, emerging readers will find much to enjoy and discover as Anna and her family impart wisdom and wit, blend the contemporary with the traditional and revel in having fun together.

Sometimes we’re lucky to have a special person enter our lives and become an emotional touchstone, a beacon of light during dark times. In The Puffin Keeper , lighthouse keeper and artist Benjamin Postlethwaite becomes such a figure for young Allen Williams.

At first, it’s because Ben rescues 5-year-old Allen, his recently widowed mother and 28 other passengers from a shipwreck near Ben’s lighthouse on the Scilly Isles, then gives Allen a painting to keep. Later, it’s because memories of Ben’s heroism and kindness resonate through Allen’s life, especially when the boy longs to escape his difficult circumstances. At his strict grandfather’s house, Allen lives in terror of being rapped on the hands with his cruel governess’ ruler, and at boarding school, he is forced to run cross-country as punishment for repeated attempts to run away.

Allen discovers that he loves running and, inspired by Ben’s painting, also develops his own artistic talents. He even paints the envelope of a letter he sends to Ben, but Ben doesn’t reply. Finally, teenage Allen decides to make a “journey of exploration” to the lighthouse. He reunites with Ben, who never forgot him, and the arrival of an injured puffin at the lighthouse augurs new beginnings for humans and birds alike. When Allen must eventually make a far more perilous journey, thoughts of Ben and the puffin help him once more.

The Puffin Keeper is an emotional tale of people and creatures who forge joyful bonds, endure storms and carry on. As Michael Morpurgo’s  affecting story makes clear, Allen is a touchstone for Ben as well, in a sweet reminder that we may affect others more than we ever realize.

The emotional impact and classical feel of illustrator Benji Davies’ artwork are just right for this book. Many illustrations’ sepia tones hint at days gone by, while roiling seas rise up in ominous hues of gray and blue. Davies’ depictions of human characters are nicely expressive, and the puffins are both accurate and adorable.

Morpurgo is no stranger to crafting appealing and meaningful tales. The award-winning British author has written more than 100 children’s books, with War Horse being perhaps the best known among them. In an afterword, Morpurgo reveals a personal connection to the real-life figure who served as inspiration for the character of Allen, a historical tidbit that sheds warm light on an already luminous story.

After His Friendship With Kevin Hart Was Declared A Conspiracy, The Rock Had A Classic Response
Meet Your Maker revealed, a brutal new take on building and raiding
Rae Sremmurd’s Slim Jxmmi Arrested at LAX Over Georgia Drug Case
Lena Dunham Reveals Big Director Penny Marshall Once Called Her Out In An Audition, But She Was Totally Right
Birds possess an amazingly dinosaur-like feature before they hatch from their eggs