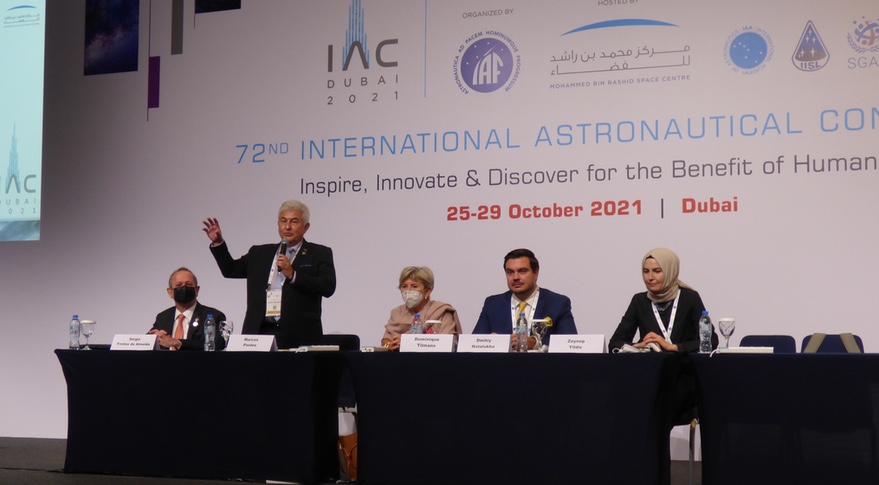 DUBAI, U.A.E. — An international group of elected officials is using a conference this week to build awareness about the importance of space among other politicians.

While this was the eleventh such meeting, it took on a new format this year. “In the past it was speeches from big companies or space agencies,” said Dominique Tilmans, an IAF vice president and former member of the Belgian Senate, during a press conference about the meeting Oct. 24. “We decided to reshape the meeting by asking parliamentarians to make presentations about space applications.”

That new focus, she said, was intended to get them to think more about the benefits of space. “Our goal is to interest more and more parliamentarians in the space sector,” she said. “Our goal is to space understandable and accessible.”

The meeting included sessions on the use of space for health, mobility and public services, with attending parliamentarians giving presentations on uses of space in their countries. “Some parliamentarians, before coming to the meeting, were not especially interested in space,” Tilmans said. “What we saw was enthusiasm: they understand space is so powerful, so interesting. So, they begin to become very interested in space.”

Some participants were already interested in space, including one person who had flown in space. “We have to see the problem from the perspective of applications or solutions from space,” said Marcos Pontes, Brazil’s minister of science, technology and innovation, who flew to the International Space Station in 2006. “We can work together to find out how we can use the infrastructure we have, or other countries have.”

The meetings discussed best practices about space applications in various fields. It did not, though, go into detail about legal and regulatory issues, including on topics like orbital debris that pose a growing risk to the ability to deliver those space applications.

“There are so many things to discuss, and this is our first meeting in this new version,” Tilmans said. “This time we decided to discuss practical solutions, space solutions.”

Pontes suggested it might be a topic for future meetings. “Space debris is a really important issue,” he said. “This is part of our concerns about the law of space, and how we can work together as countries to get legislation that would be effective.”