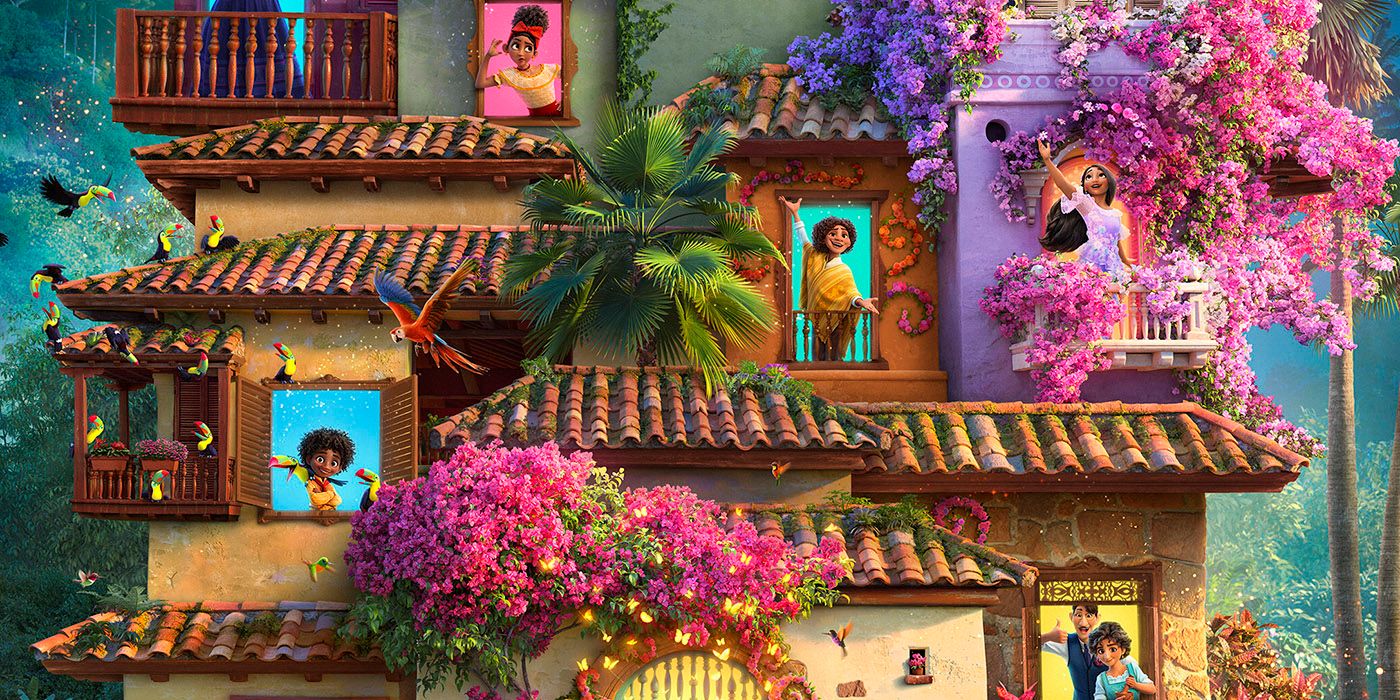 Disney eschews an individualistic narrative for an homage to family in Encanto, arriving in theaters on November 24. The upcoming animated adventure introduces viewers to a magical house hiding in the mountains of Colombia and the multiple generations that live in it. The Madrigal family’s casita imbues each member with special gifts when they turn 5 – except for Mirabel (Stephanie Beatriz, In The Heights). Though she has always wondered why she has no power, Mirabel soon learns it may be up to her to save her family and her home from destruction.

Producer Clark Spencer, who has worked with Disney since the days of Lilo & Stich, teamed up with Yvett Merino (who has previously served as production manager on Moana) to help the creative team bring their vision to life. Aside from needing to ensure that Colombian culture was authentically represented, they also had to keep several plates spinning in the air as each Madrigal struggles with their role in the large extended family.

Merino and Spencer spoke to Screen Rant about the journey they’ve gone on with Encanto and the importance of grounding the magic realism of the world in specificity.

Screen Rant: How did the concept first come about, in terms of your role in the project? What were the first steps you took to prepare yourself for the film?

Yvett Merino: Byron [Howard] and Jared [Bush] really wanted to collaborate and tell this story about family, so they actually had been working on it for about five years in our development department. From the very beginning, they wanted to tell a story about family based somewhere in Latin America. [After the] research that they did while in development, they went on their research trip and really started focusing in on Colombia.

I became involved in the film about three years ago. I was in the studio at the time, so I was always very curious about what they were talking about. You hear, “Oh, I think they’re working on something in Latin America,” so I’d knock and be like, “Hey, what’s going on?” Trying to get any information that I can. I was so grateful when I had the opportunity to actually work on the project.

Coming on to the project, they transition out of development, and we really start focusing more so on the story. We start our whole screening process and start designing the world in which we want to build.

Clark Spencer: I came on about the same time. What’s interesting is I’d come off Zootopia, where I worked with Byron and Jared, and I said to them at the end of the film, “I really hope we get to work together again.” When the directors went into development – Jared went onto Moana and Byron went into development – they were starting to talk about it. I jumped on to produce Ralph Breaks The Internet, so I was busy on that project. I kept saying, “Hey, don’t forget. I’d love to be a part of whatever your next project is.”

I remember one day when they pitched the idea, saying, “We’re going to tell the story about a large extended family where everyone has some magical gift or magical power -” they didn’t know what those were going to be, “Everyone but one.” I was in because I loved the emotional side of that. I was like, “Well, I already loved this character because I’m already wondering why.” Why doesn’t she have this when everyone else does? Who is she? I want to go on that journey.

As a Latina myself, I love how specific Encanto feels, especially the inclusion of diversity within the family. That’s something that’s often overlooked in the Latinx community. How much of a conscious choice was it to make this world as specific as possible, as opposed to a magic realism wonderland?

Yvett Merino: I think when Byron and Jared and Lin all went down to Colombia, one of the things that they came back talking about was the great diversity within the country. Whether it’s the people or the biodiversity, there’s so many different parts of Colombia that are beautiful and also very different from each other.

One of the things they did early on was gather the Latinx employees within the studio together. We formed this group called the Familia Group, and we would get together once a month over lunch, just really talking about our families. It was a great way for us, who never really came together in that way, to talk and share our stories about our families. We were all from different backgrounds, but there were some commonalities – and we would laugh and cry and talk about all these great things.

But one of the things that came from all of that was the differences in all of our families. My grandparents are all from Mexico, so I’m Mexican American, but I have first cousins who have red hair and blue eyes. We don’t question whether they’re Mexican or not; they just are. From the very start, Byron and Jared really wanted to build this family as a true family really is: diverse and different, yet all living under one roof.

Lin-Manuel Miranda’s music is so iconic. What would you say that his style brings to the story and to the collaboration with Germaine Franco?

Clark Spencer: There’s two things. One is I think he’s done a brilliant job of figuring out how to be inspired by Colombian music as he thinks about writing new songs. And that includes instrumentation: percussion, accordion, harp – instrumentation that comes from that region; he’s being inspired by that and bringing and weaving that through the songs.

But what makes it so uniquely Lin is not just the musicality of it, but the lyrics. He is just a genius when it comes to lyrics and being able to give you the earworm that you are going to have, so you can’t lose the song in your head in any way, shape, or form. But they also propel the story forward. Songs in a film need to feel like the story has moved forward. It can’t just be we’re going to stop, and here’s a great song, wasn’t that fabulous? And now the story picks back up. It has to actually take you on a journey. Given all of his experience on Broadway, he knows it so deeply and so well, so all of the songs do that.

And I think the thing that blows my mind away, and I hope it blows the audience’s mind away, is he does these huge numbers. We usually have one or two huge numbers in a Disney animated film, but there are many in this film. When you look at a song like “We Don’t Talk About Bruno,” which is a huge ensemble number, it is so fantastic. And there’s so much more of that in the film that people are going to be super excited to see.

This is an incredible cast, but Stephanie Beatriz’s range is insane to me. What qualities did she bring to me that made her right for the role of Mirabel?

Yvett Merino: When we first met Stephanie, we knew her from Brooklyn Nine-Nine, and I didn’t know much beyond that. I knew her character Rosa, where she is very serious and very not funny. There’s comedy in her way, but the character itself [wasn’t comedic].

When she came in, we were so pleasantly surprised by her natural voice and her personality and how much she brought – even over Zoom. So much of her personality just jumped through the screen. And then she sang, and we were like, “Where did that come from?” It was just amazing.

From the very beginning, she was Mirabel. She has brought so much of her vulnerability to it. She is so vulnerable in these sessions and then making us crack up in the next session by her improv. She brought so much to this character that there really is no one else in my mind. It is her.

Finally, is there a member of the Familia Madrigal that you most relate to or whose gift you would like to have for yourself?

Clark Spencer: The character I might relate to, or I’ve always loved from the beginning, is Antonio. I think one of the first things that went into production was Mirabel and Antonio under the bed.

I’ve always loved this character, and he’s an introvert – as much as our jobs as producers require us to be extroverts, it’s not really who I am. Internally, I’m an introvert. So, I really relate to him trying to figure out, “How do I come out of my shell?” For him, it’s talking to animals. For me, it’s work. Work forces me out of my shell. If I didn’t have work, I’d be very introverted and siloed. I think, in some ways, he’s the character that I most relate to.

But who wouldn’t want to be Camilo, where you could change into whatever you want to? If I got to pick something, I’d be like, “Oh, well, every day I could be somebody different.” That might help, but Antonio is the character I really relate to.

Encanto opens in theaters on November 24.

What If? Writer Responds To Complaints About Too Many Iron Man Deaths
Related Topics

Tatiana Hullender is a writer at Screen Rant, focusing on film and television, as well as a co-host of several podcasts. In the interviews she conducts for Screen Rant, she seeks to learn what drives each creative mind and how different experiences influence the same narrative. As a graduate of Columbia University in New York City, Tatiana studied theater and comparative literature. She has been passionate about all manner of storytelling since being exposed to Jane Austen and BBC adaptations of her work all at once. But Regency satire of manners isn’t the only genre she loves, as a love of comic books naturally developed into a love of cinematic universes and their superheroes. So long as a story has heart and humor, there’s a chance of finding something to enjoy in the telling of it.
Visit @myrcellasear on Twitter to follow Tatiana’s articles, interviews and podcasts including: The Flash Podcast, Pop A La Carte and Ladies With Gumption. Subscribe to them on the Podcast app, or contact her directly at painted(dot)out(at)gmail.com.