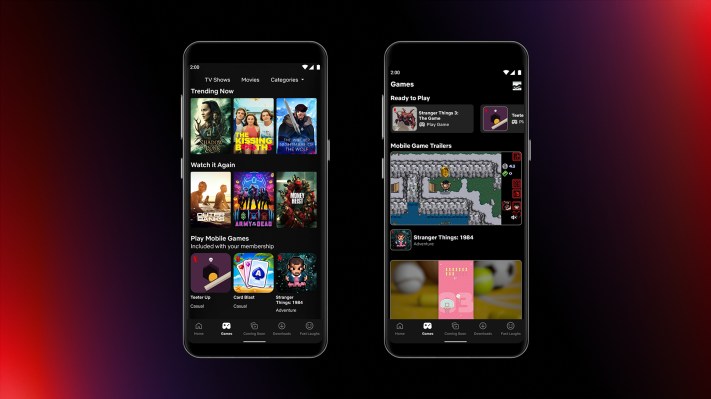 Netflix is expanding its mobile gaming push with the launch of three more gaming titles which will become exclusively available to Netflix members in select European markets. The company today is introducing a trio of casual games — “Shooting Hoops,” “Teeter Up,” and “Card Blast” — to Netflix members in Spain and Italy, as well as Poland, where Netflix recently began marketing its first members-only mobile games within its Android app.

Similarly, the new titles will be made available using the same model. Through a new “Games” tab inside the Netflix app, members will be directed to the games’ listings on the Google Play Store for their region. Here, they’ll download and install the game as they would any other app. But when it comes time to log in, they’ll need their Netflix credentials to begin playing.

The new games will also be entirely free to play, without any advertising or in-app purchases. While the first two titles to launch within Netflix’s Games tab were tied to the popular series, “Stranger Things,” these new games have no connection to any Netflix movie or show. Instead, they are simple, casual games meant to appeal to a wide range of gamers. They represent Netflix’s increased investment focused on making mobile games a part of a broader entertainment offering that is now growing to include more than just streaming content.

The additions will officially launch today at 8 AM PT, which is 5 PM in Italy and Spain. That’s when the games will go live on Netflix’s service.

The company recently spoke about its plans to expand into the gaming market during its Q2 earnings, saying it was in the early stages of exploring what this model may look like.

“We view gaming as another content category for us, similar to our expansion into original films, animation, and unscripted TV,” read Netflix’s shareholder letter, adding that its initial focus would be on free games designed for mobile devices. “…Since we are nearly a decade into our push into original programming, we think the time is right to learn more about how our members value games,” the company explained. 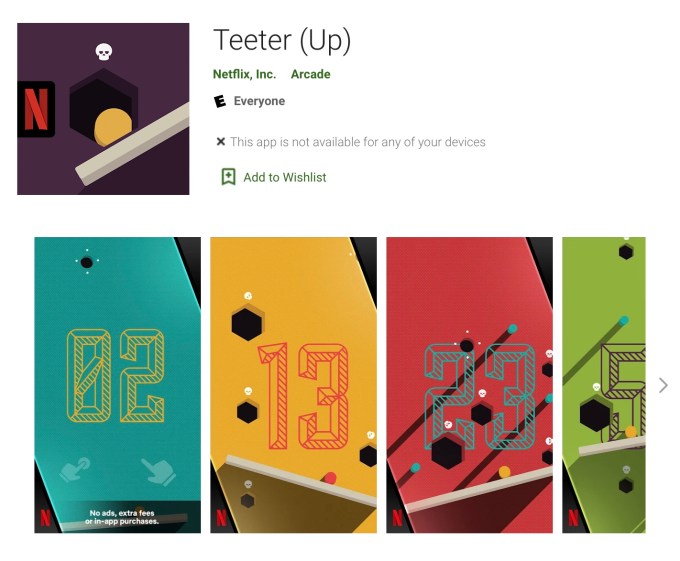 Image Credits: Screenshot of Teeter Up on Google Play

In late August, Netflix made good on those statements when it shifted two “Stranger Things” titles created by the Allen, Texas-based game studio BonusXP to become Netflix exclusives. These games, however, had been previously available on the Play Store and continues to be playable by those who already had them installed. But new gamers could now discover the two games — “Stranger Things: 1984” and “Stranger Things 3: The Game” from within the Netflix app.

That same model continues with the new releases.

These developers aren’t credited on the Play Store listings, as the games themselves are published under Netflix’s Google Play account.

Reached for comment, after TechCrunch happened upon one of the new titles, Netflix confirmed the details about the launch plans and offered a statement about its mobile gaming expansion.

“Starting today, Netflix members in Spain and Italy can play five mobile games on Android as part of our ongoing games rollout,” a Netflix spokesperson said. “These five games include ‘Stranger Things: 1984,’  ‘Stranger Things 3: The Game,’ ‘Card Blast,’ ‘Teeter Up,’ and ‘Shooting Hoops,’ which are all also available in Poland now. We’re still in the very early days, but we’re excited to bring these exclusive games as part of the Netflix membership – with no ads and no in-app purchases.”

Earlier, Netflix explained it chose Poland as the initial test market for mobile gaming because the country has an active mobile gaming audience, which made it seem like a good fit for this early feedback.

Today, the company notes that Italy and Spain were chosen as additional markets for similar reasons and because the European market, overall, is an important one for Netflix.

Netflix says it plans to launch games in other regions, including the U.S., at some point in the future, but could not say when. It also eventually aims to bring its games to iOS.

The suite of mobile games will be available within the Games tab in Netflix’s Android app in Poland, Italy, and Spain, starting at 8 AM ET/11 AM PT/ 5 PM CET today.

Dying Light 2 Story DLC Delayed But Photo Mode Coming Next Month
Grey’s Anatomy Season 18 Episode 17 Review: I’ll Cover You
‘The Masked Singer’ Has Longest Day of Production Ahead of Final Round
‘Bullet Train’ Moves A Week Later This Summer
Octopuses tragically destroy themselves after mating. We may finally know why