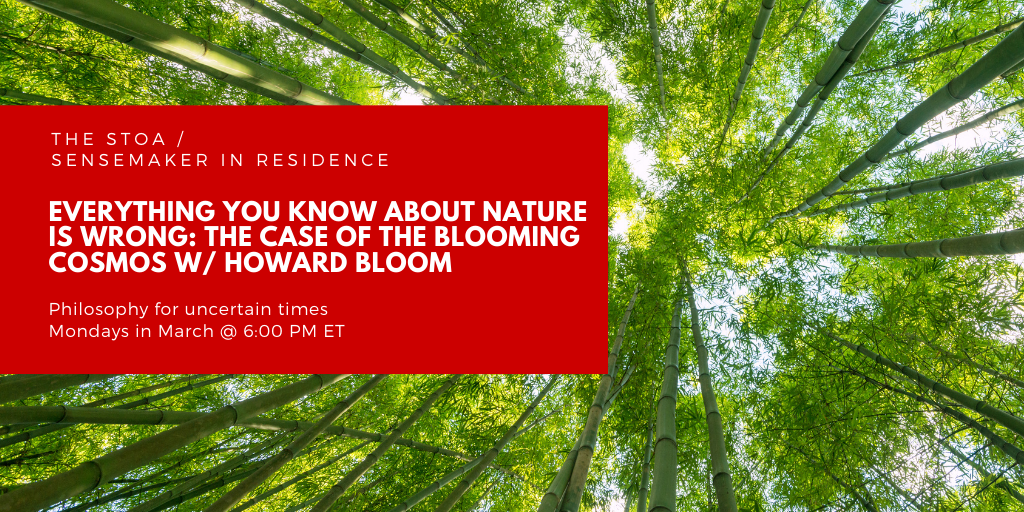 Howard Bloom will be speaking for The Stoa “Sensemaker In Residence” series on March 1st, 8th, and 15th at 6:00 PM ET.

The Topic of discussion will be “Everything You know About Nature Is Wrong: The Case of the Blooming Cosmos.”

Bloom has been called the Einstein, Newton, Darwin and Freud of the 21st century by Britain’s Channel 4 TV and “the philosopher at the end of the universe” by Gear Magazine.

Says Bloom about his Stoa topic, “Science has been headlocked for 170 years in the dogma of entropy, the idea that the primary force in this cosmos is chaos and deterioration. But the real scientific story of the universe blows this dystopian notion to bits and opens whole new horizons to the human imagination.”

Focuses on Bloom’s books The God Problem and Global Brain.  Probing the origins of the universe, how it may have begun with simple rules, and what those rules mean for you and me today.  Plus five heresies, five things science takes for granted that simply aren’t true.  And the origin of life.  How life has networked globally from the very beginning, and how all the children of the big bang, from stars and stones to you and me, have acted as feelers and antennae for an evolutionary search engine.

The Lucifer Principle–the origins of evil…and of good. How from our best qualities come our worst, and what competition between tribes and nations achieves.

The Genius of the Beast–how the western system has doubled the human lifespan, upped the lowest wage to what seven of the lowest wage earners made in 1850, has increased the average IQ by 35 points, and has upped the peace in the world by a factor of ten. And the obligation this leaves to you and me.

Gear Magazine says Bloom “may just be the next Stephen Hawking.”  He has been a Visiting Scholar at New York University, a core faculty member at the Graduate Institute, and is the critically acclaimed author of  seven books, including The Lucifer Principle: A Scientific Expedition into the Forces of History (1995) and Global Brain: The Evolution of Mass Mind from the Big Bang to the 21st Century (2000).

Bloom’s writings have appeared in The Washington Post, The Wall Street Journal, Wired, Knight-Ridder’s Financial News Service, Psychology Today’s blog site, The Scientific American’s blog site, and in: arxiv.org, the leading pre-print site in advanced theoretical physics and math.  He has also been published in scholarly journals like PhysicaPlus; Across Species Comparisons and Psychopathology; BioSystems; New Ideas in Psychology; The Journal of Space Philosophy; and in the books: Research in Biopolitics; The Future Information Society; and NASA’s Cosmos and Culture.

In addition, Bloom lectured an international conference of quantum physicists in Moscow—Quantum Informatics 2006—on why everything we know about quantum physics is wrong, and the concepts Bloom introduced were later used in a book proposing a new approach to quantum physics, Constructive Physics, by Moscow University’s Yuri Ozhigov.

Bloom is the founder and chair of a group Buzz Aldrin convinced him to form in 2005, the Space Development Steering Committee, and a member of the board of governors of the National Space Society.

Bloom began in microbiology and theoretical physics at the age of ten and formulated a theory of the beginning, middle, and end of the universe that predicted Dark Energy when he was working at the world’s largest cancer research center at 16.  Bloom believes that science must harvest the insights of the arts. So he’s done fieldwork in visual art and music.  In 1968 he co-founded Cloud Studio, which became one of the leading avant-garde commercial art studios on the East Coast. In 1971 he became editor of the monthly rock magazine Circus, and was credited by Chet Flippo, one of the founding editors of Rolling Stone, with single-handedly creating a new magazine genre, the heavy metal magazine. In 1976 he founded the Howard Bloom Organization, Ltd., which became the largest public relations firm in the record industry, with clients like Michael Jackson, Prince, Bob Marley, Bette Midler, John Mellencamp, Billy Joel, Billy Idol, Simon & Garfunkel, Queen, Kiss, AC/DC, Aerosmith, and Run DMC.

Says Joseph Chilton Pearce, author of Evolution’s End and The Crack in the Cosmic Egg, “I have finished Howard Bloom’s books, The Lucifer Principle and Global Brain, in that order, and am seriously awed, near overwhelmed by the magnitude of what he has done. I never expected to see, in any form, from any sector, such an accomplishment.  I doubt there is a stronger intellect than Bloom’s on the planet.”

More information  may be found at https://www.thestoa.ca with a link to register for the event.