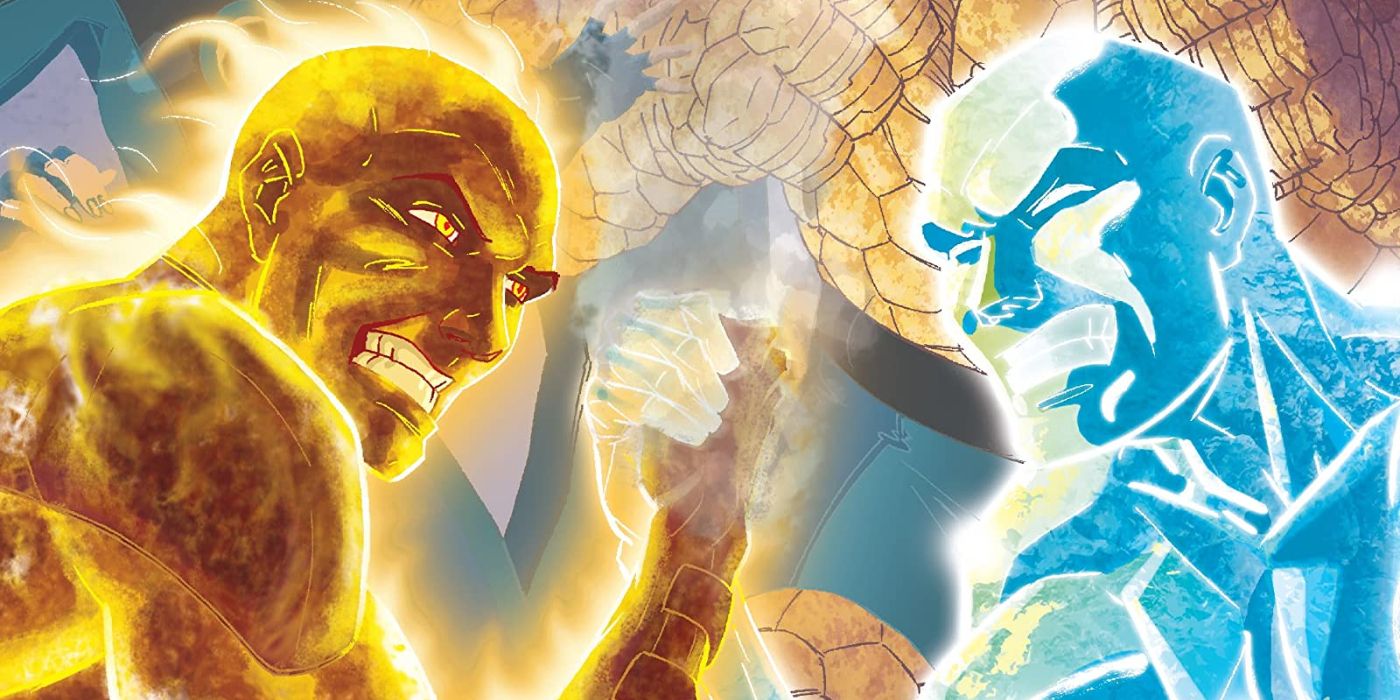 Game of Thrones even exists in the Marvel Comics universe, and it’s been referenced by everyone from Spider-Man to the X-Men. Curiously enough, though, it seems one superhero has never come across the series – or, at least, has never realized it was inspired by novels. Johnny Storm of the Fantastic Four, aka the Human Torch, is apparently oblivious to George R.R. Martin’s fantasy world.

He made that clear in the Uncanny X-Men: Winter’s End one-shot, in which Iceman celebrated his birthday. Bobby Drake had invited friends and family along for a birthday party; naturally, it didn’t go well, with everything from family drama to a confrontation between Iceman and a version from an alternate future timeline. Still, plenty of friends did turn up, and the Human Torch brought along the most amusing gift of all. He’d written a song in honor of their bromance, which he called “A Song of Ice and Fire.” It fell to poor Iceman to reveal the name was already taken.

The joke works on so many levels. The Human Torch has probably heard of Game of Thrones, but he’s not exactly the literary type, so he’s unlikely to have ever realized it was inspired by a series of novels. Meanwhile, of course Johnny Storm is self-absorbed enough to write a song about himself and Bobby as a birthday present. As the saying goes, with any gift, it’s the thought that counts; and for the Human Torch, the thought was decidedly egocentric.

It’s fascinating to imagine what the Fantastic Four would make of sci-fi and fantasy TV shows like Game of Thrones. Frankly, their own lives are so fantastical they may well find even the most imaginative worlds underwhelming. No doubt Johnny would watch the war for the Iron Throne with an amused glint in his eye, remembering the far more dangerous battle he fought to become ruler of the Negative Zone for a brief time. Meanwhile, it’s easy to imagine Mr. Fantastic pausing an episode to begin a lengthy discussion on narrative inconsistencies, or else swiftly deducing the end of an arc. The Thing is the only one who seems likely to enjoy escapist fiction, but even he’s unlikely to have read the books; his mutated fingers aren’t exactly made for turning pages.

More: Why Movies Keep Getting Fantastic Four Wrong (& How Marvel Can Fix It)


Does The Batcave PROVE Batman is Secretly a [SPOILER]?
Related Topics
advertising
About The Author

Tom Bacon is one of Screen Rant’s staff writers, and he’s frankly amused that his childhood is back – and this time it’s cool. Tom’s focus tends to be on the various superhero franchises, as well as Star Wars, Doctor Who, and Star Trek; he’s also an avid comic book reader. Over the years, Tom has built a strong relationship with aspects of the various fan communities, and is a Moderator on some of Facebook’s largest MCU and X-Men groups. Previously, he’s written entertainment news and articles for Movie Pilot.
A graduate of Edge Hill University in the United Kingdom, Tom is still strongly connected with his alma mater; in fact, in his spare time he’s a voluntary chaplain there. He’s heavily involved with his local church, and anyone who checks him out on Twitter will quickly learn that he’s interested in British politics as well.

Film Review: Devil Species (Phantugram ammahit) (2004)
Valve’s list of cancelled games includes a Dark Souls-like RPG, a new Left 4 Dead, and Half-Life 3
Film Review: The Thing (1951)
Matt Lauer Dines with Mystery Woman Before Yachting on ‘Resilient’
Universal’s Monsters Are Getting Another New Movie, But Not One We Were Expecting