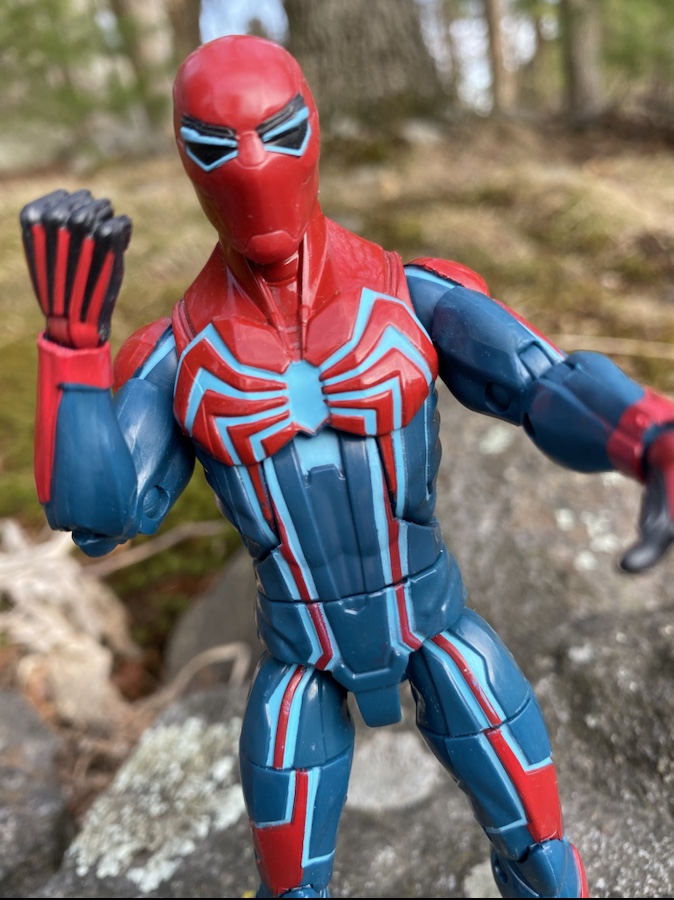 The Marvel toy news drought continues while the collecting world is mostly on hold because of COVID-19, so let’s take a look at another 2020 Marvel Legends figure review that I’ve had in the queue! Last time I looked at the Spider Armor Mark III figure, which I ended up liking far more than I was expecting to. This time, let’s see if the other Spidey variant in the wave fares as well! The Marvel Legends Velocity Suit Spider-Man figure is required to build the Demogoblin BAF, and is the only pure GamerVerse figure in the wave: is it also any good? 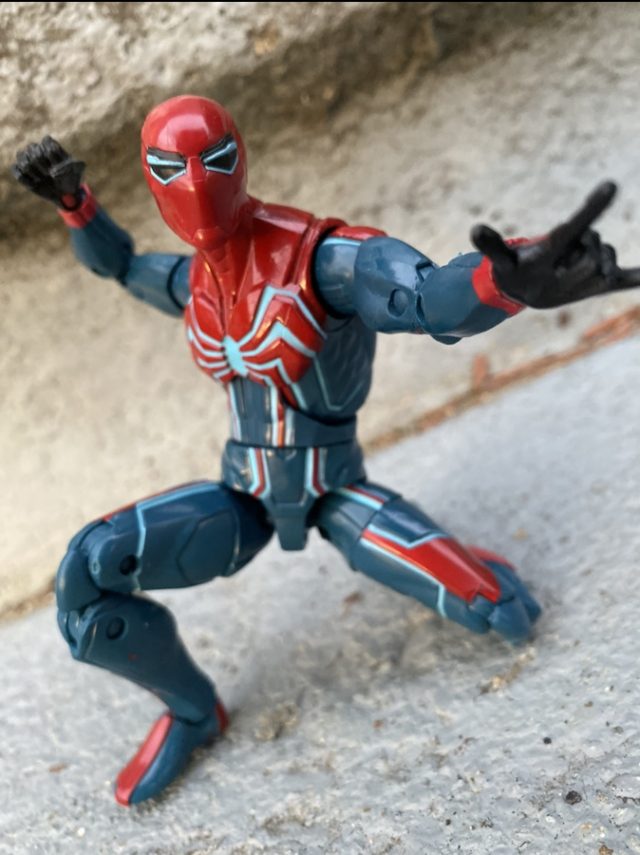 Here’s a weird fact: this is the first-ever mass-release 6” Marvel Legends GamerVerse figure based on a GamerVerse-original design, as Advanced Suit Spider-Man was a shared exclusive that started at GameStop and Spider Armor Mark III originated in comics. That’s not an especially cool factoid, mind you, but hey: I really don’t feel like there’s a whole lot to talk about in this particular review.

The Velocity Suit costume was one of only a couple costumes to originate in the PS4 Spider-Man game, and had some buzz after being revealed from the game, so it seems as good a Spidey variant to do as any other for the game, right…? 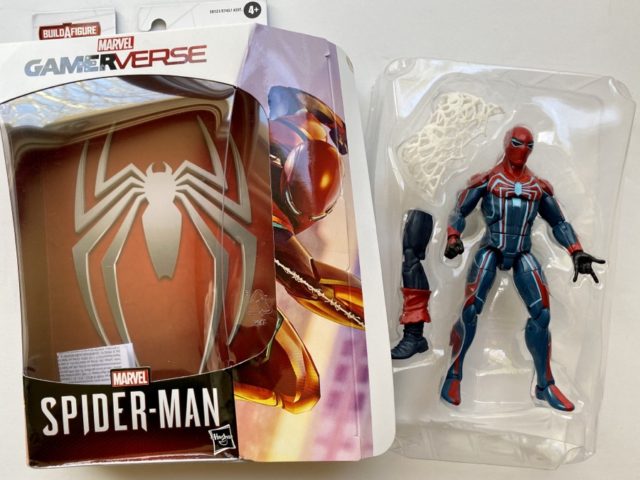 While I certainly agree in theory that this was a swell costume choice to capture in plastic, I think Hasbro didn’t quite nail the landing with this one as they did with the Spider Armor. 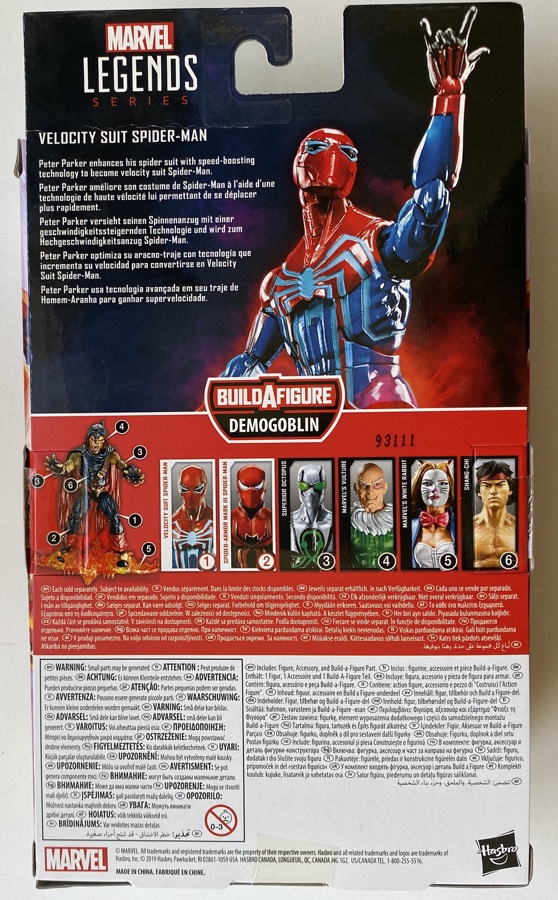 Whereas this armor comes off as ultra sleek and hi-tech in the PS4 Spider-Man video game, the actual colors of the plastic and paint used for this figure look, well… plastic. 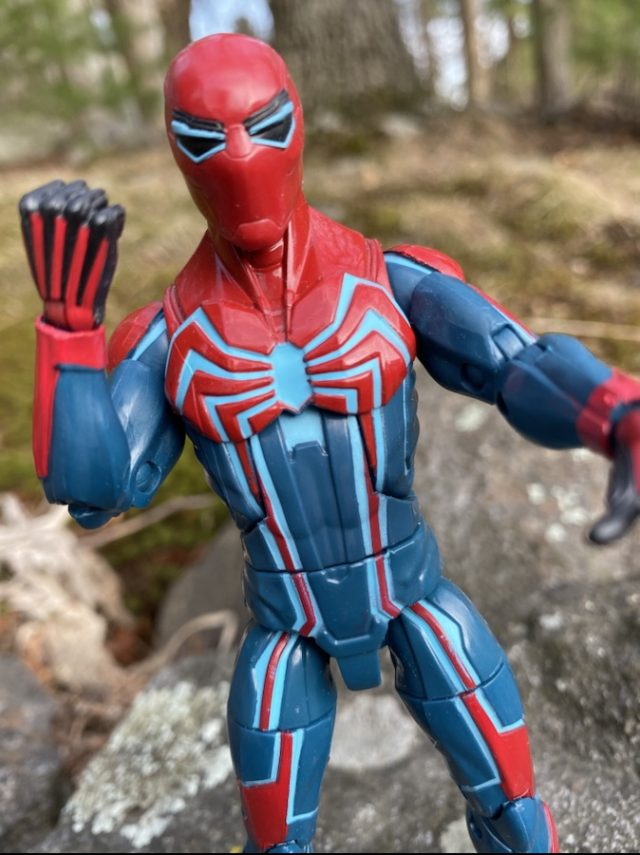 We’ve seen Hasbro use metallic paint in the past with great results, but they went with non-metallic glossy paint for this Marvel Legends Velocity Suit Spider-Man—and it just doesn’t work, in my opinion. The colors don’t look dark and shiny enough to feel accurate/authentic to the game, which is a genuine shame, since they’re a huge part of the appeal of this costume. 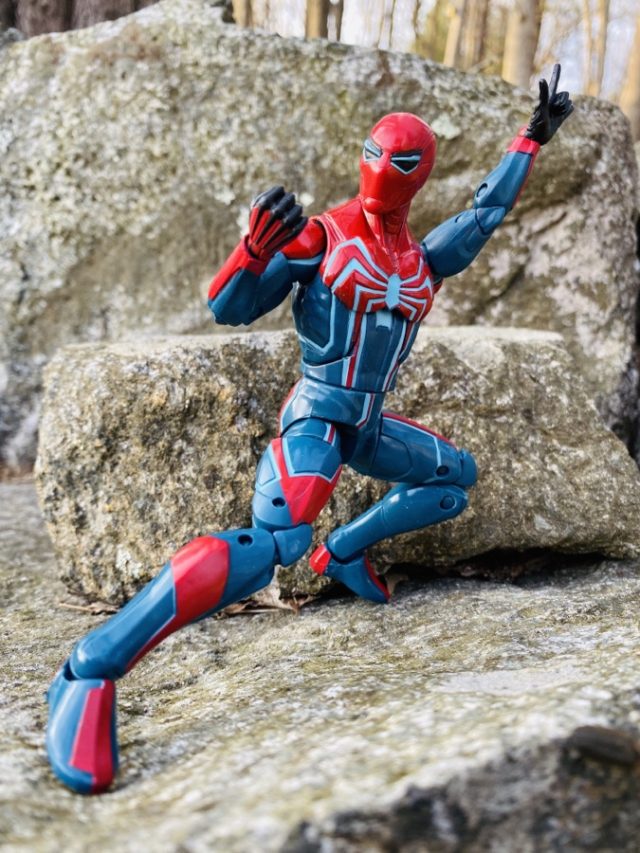 As with the Spider Armor Spidey I reviewed last week, this is another variant where we get one fist, one web shooting hand, and zero interchangeable extra hands. It’s a disappointment that cuts off many potential poses, although admittedly it’s the best pair of hands if there won’t be alternate ones included. 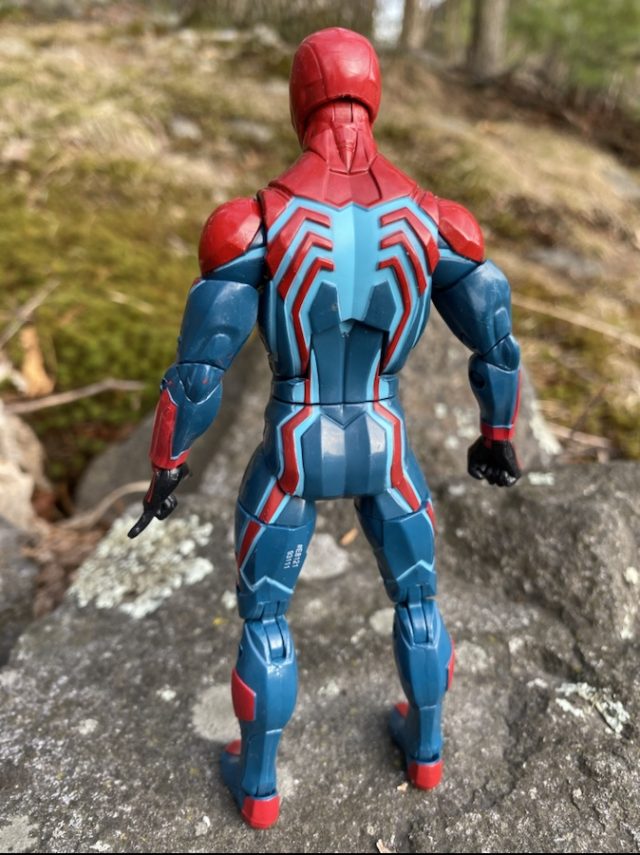 That’s not to say this figure is all-bad, though. It’s actually just sort of average—which turns out to be “below average” in the modern era of absolutely exceptional 6” Marvel Legends figures by Hasbro. 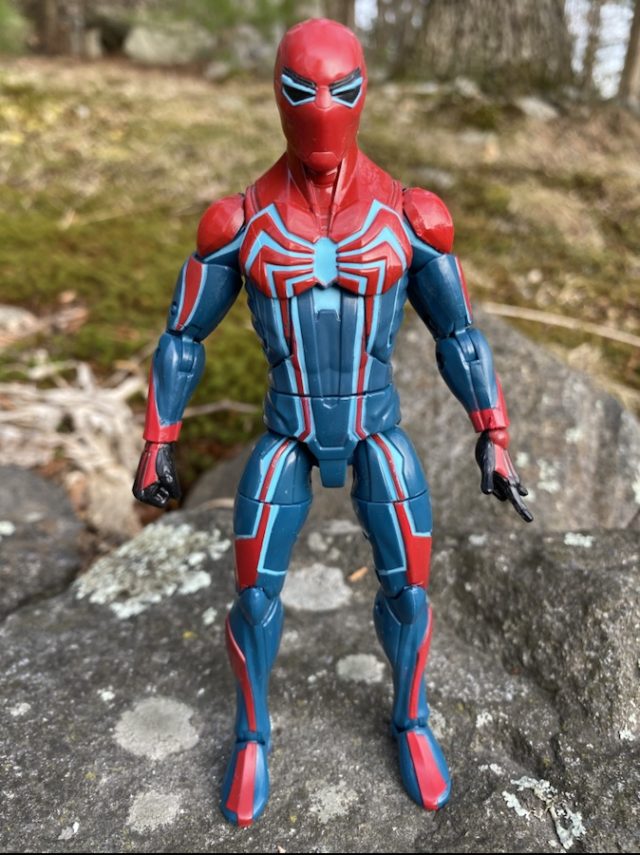 The mold used for this action figure actually required a lot of expensive new tooling, and the angular-looking sculpt is a great one—it’s just let down somewhat by the plastic colors and paint. 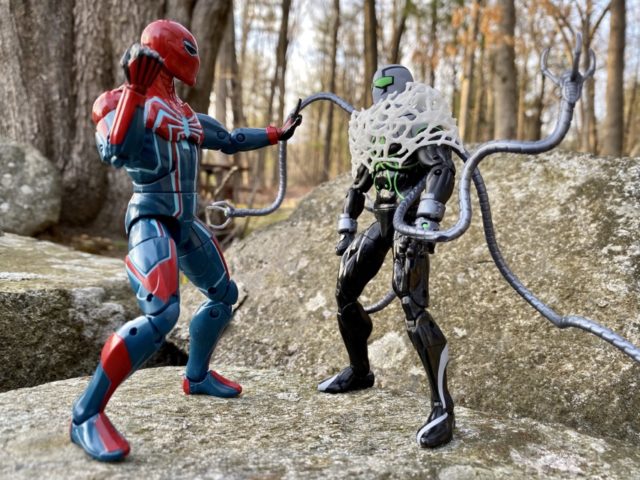 And the one accessory included (along with an essential Demogoblin Build-A-Figure leg) is another outstanding new web effects piece—this time a “web wrap” that can slide over the shoulders to tie up most generic Marvel Legends figures. 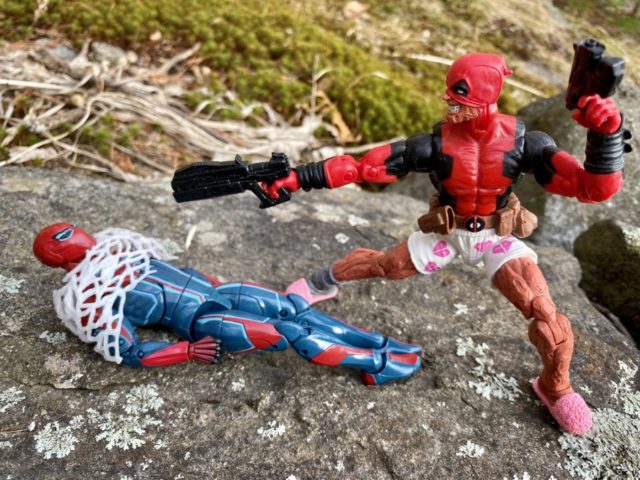 The web wrap isn’t quite as fun or compatible as the “web face” effect that came with Spider Armor Mark III, but it’s still a delight on figures it works with. 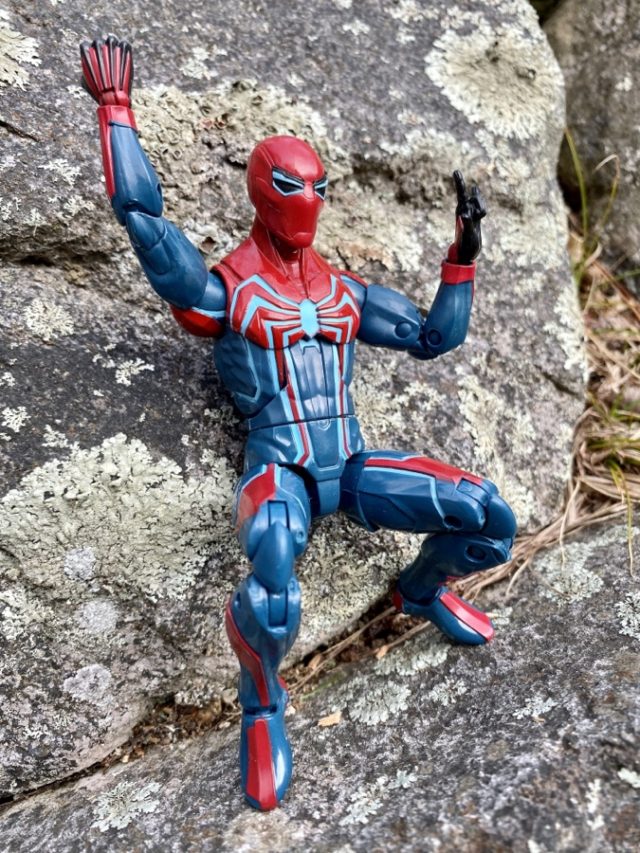 And the articulation is solid, if imperfect, including the usual: 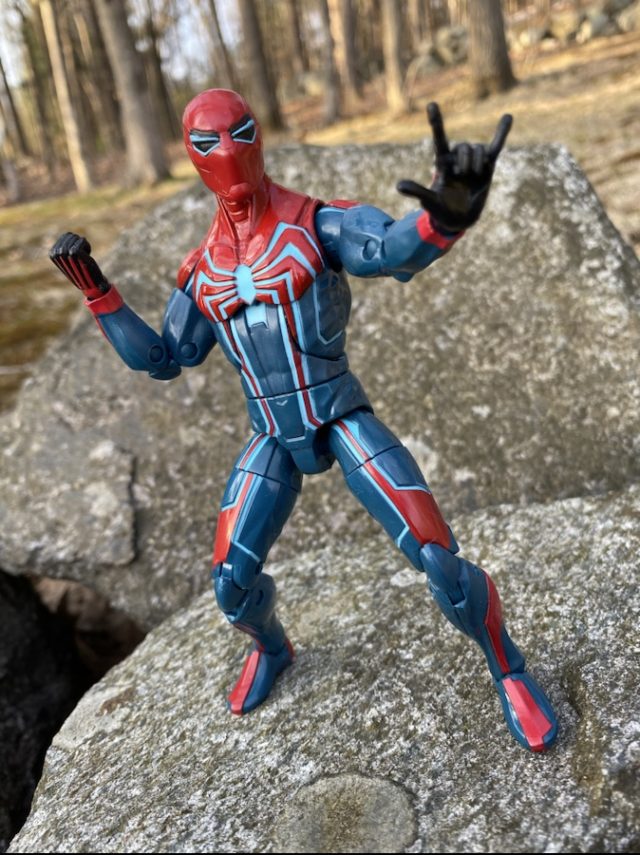 This particular body is a big bulkier than other Spideys, and doesn’t feel like it has quite the usual range of motion. The lack of butterfly swivel shoulders is also keenly felt here. This is still a fun Spider-Man toy to play with, but it’s definitely inferior to other recent versions in many ways, including flexibility. 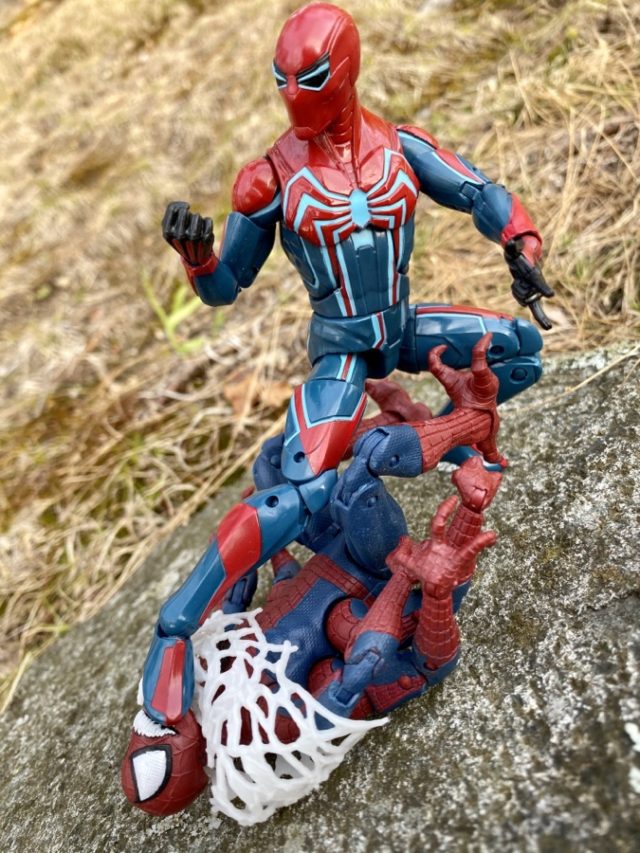 Overall: While I wouldn’t call this a BAD figure, it’s certainly not one of the more spectacular entries that we got from Hasbro to start off the year. I appreciate all of the unique tooling expenses Hasbro paid out for this mold, but the paint deco on this figure really lets it down—the colors just aren’t quite right, and could have greatly benefitted from metallic paints and a nice sheen. The webbing effects piece is an awesome accessory, but the lack of interchangeable hands is a limiting factor once again.