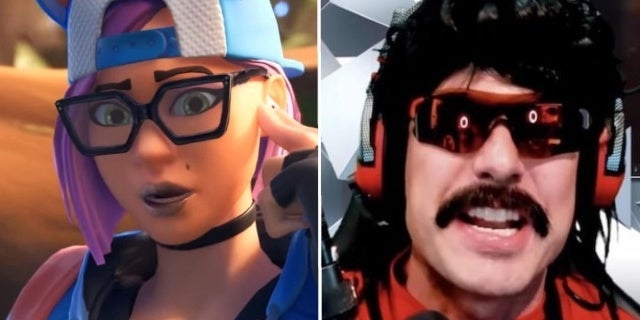 During a recent stream on Twitch, Dr Disrespect was overcome with anger after a frustrating death during his return to Fortnite for the launch of Chapter 2 Season 2. As you may know, the popular streamer isn’t the biggest fan of the free-to-play battle royale game on PS4, Xbox One, PC, Nintendo Switch, and mobile phones. In fact, recently he slammed the game and the “corny, brainless” kids that play it. However, given the game’s popularity, the Two-Time does often find himself streaming the game, especially at the start of a new season when the hype train is full speed. That said, it really seems like the game is breaking the streamer.

During the aforementioned stream, the Doc found himself in a pretty basic building battle, which ended abruptly after his shotgun blast failed him and his opponent took a few shots at him with a Scar from close range. This was enough to set off the streamer.

The streamer continued, pleading with developers to make better games:

“Let’s make — developers, industry — let’s make some intelligent games. Let’s f*****g make some good games. None of this f*****g one ramp, two ramp, wall, ceiling, floor, and then shotgun blast that does f*****g nothing because we’re doing a coin flip in the air. Like I don’t want to play that anymore. I want intelligent paced games I want open worlds, with intelligent skill gaps. I want to aim and shoot, and have that be part of the skill, not some f*****g bloom weapon. Not some randomized number that’s put on my shotgun.”

Of course, if you follow Dr. Disrespect, you’ll be pretty familiar with these complaints, however, do you agree with the Two-Time’s criticism of the game? Let us know in the comment section below!