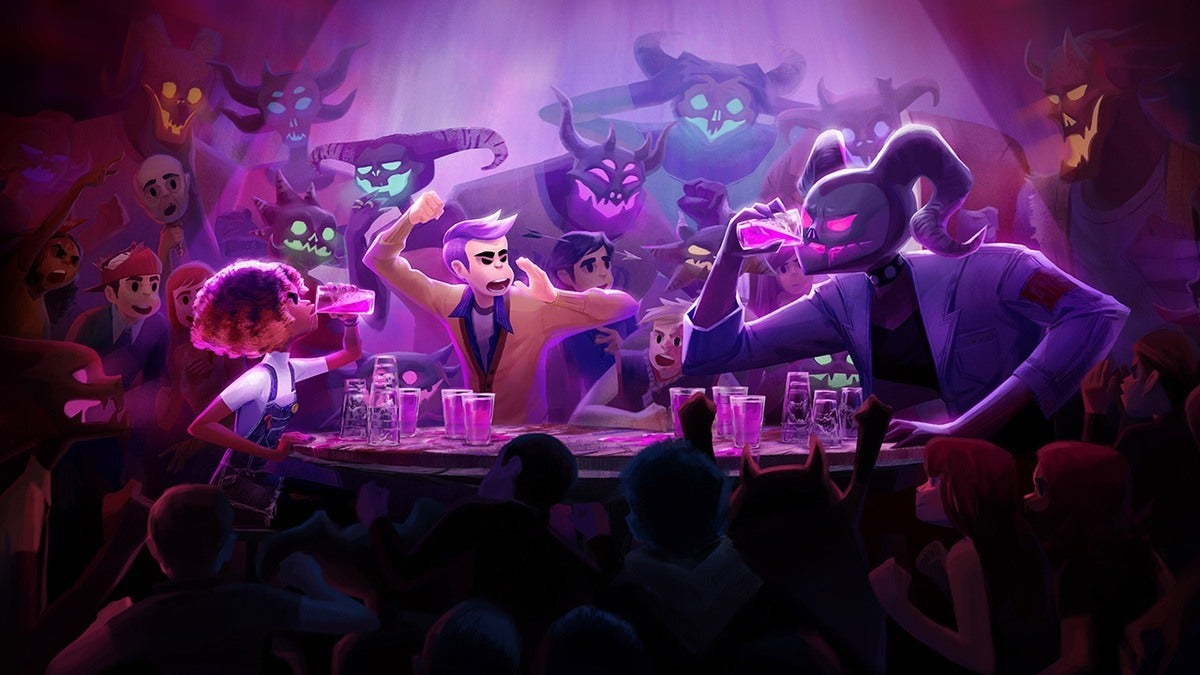 Afterparty. The Oxenfree developers’ descent into the underworld retains its formula of 2D exploration with near-constant conversation and Telltale-like dialogue choices while introducing a world of neon-soaked demonic alleyways and dive bars that look… well, like most do on Earth. But inside that over-the-top demonic shell is a deeply human, cuttingly honest, and frequently funny story about two best friends making it through one hell of a night.Afterparty’s tightly knit cast allows for more personal and affecting storytelling than what we saw in Oxenfree. Milo and Lola have, surprisingly, found themselves in Hell. Believing they’ve wrongly ended up surrounded by fire and brimstone for eternity, the duo ventures off to win a trip back to Earth by beating Satan in a drinking game. Should be easy enough, right?

Well, nothing on Earth or in Hell is that simple, and Milo and Lola’s winding night takes them through several bar-filled districts of the underworld and turns into an emotionally trying, morally complex adventure. There’s an emphasis on dialogue options, as the continuous chatter often involves giving input on everything from small-scale character moments to larger, story-impacting choices. An early decision I made to help a demon instead of a human woman completely cut off a later quest for me, though thankfully Afterparty’s roughly seven-hour length makes replaying to see that mission, and plenty of other paths locked behind your choices, less of a chore and more of an intriguing alternate cut.

Night School’s vision of Hell is bright and colorful – and not just thanks to all the lava oozing around – and each bar and district of the Underworld is intriguing to explore. From the chain sports bar’s interior being garishly lit by all the HDTVs on the walls to a dingy pool hall to some surprising clubs, every interior is distinct and breathes life into the land of the dead.For a location that has been mined in plenty of pop culture, Night School’s Hell feels unique, and completely like the post-bar, 2 am, dingy cityscape it’s often supposed to evoke.

I did run into some occasional slowdowns in the more open areas and a few infrequent clipped lines of dialogue, but never to the detriment of Afterparty’s most powerful moments. And it’s all backed by another impressive score by scntfc, the EDM artist who composed Oxenfree’s haunting score. Balancing both thumping party beats and slow dirges, the music almost always sets the appropriate mood.

This Is the Bad Place!

Night School has done an impressive job of making its stars, Milo and Lola, clearly defined people while also allowing you to take on a level of meaningful control in their dialogue choices. Part of that is thanks to the biting, fun writing, which rolls as smoothly as if Aaron Sorkin added fast-talking kids to his repertoire. Milo and Lola are endearingly played by Khoi Dao (Detective Pikachu’s Tim Goodman) and Janina Gavankar (Star Wars: Battlefront II’s Iden Versio), respectively, and they quickly find a rhythm and chemistry that makes their friendship feel as lived-in as intended. They’re also both great at playing with the many turns the story does and can take, depending on both planned story events and optional dialogue choices. Moments as disparate as Lola lovingly throwing jabs at her friend or Milo trying to bury his worries about where their friendship was (platonically) heading back on Earth add depth and realism to a world involving a bunch of drunk demons.

And though Afterparty has a certain story to play out, the dialogue options frequently felt like they had meaningful emotional implications, and occasionally important story ones, too. It smartly plays with its sense of choice, often proving that maybe life in Hell has no purely right or purely wrong answers, especially when considering how those choices affect side characters. They may have been nice to you but they are, after all, demons.

Afterparty plays with the notion of Hell as both a religiously informed location and one that has to operate with some sort of day-to-day society. I won’t ruin any of its jokes here, but the ways it finds to add the mundanities of real life make a hellish lifestyle seem not far off from our own on Earth. And, as someone who sat through 12 years of Catholic school classes, I laughed out loud at more than a few passing religious references and subversions. Sorry, Sister Mary.

Dave Fennoy’s Satan is one of my favorite devils in awhile.

Night School has littered the blood and rum-soaked streets of Hell with hilarious characters who show often surprising depth as the story progresses. How cabbie Sam and personal demon Wormhorn play into the story is better left as a surprise, but actors Ashley Burch and Erin Yvette, respectively, deliver both hilarious and gutting moments that had me caring for demons in a way I never would have expected to.

And the less said about Dave Fennoy’s wonderful portrayal of Satan the better – it’s best left to be discovered. He’s easily one of my favorite devils in awhile.

Night School hasn’t revolutionized Oxenfree’s gameplay formula with Afterparty so much as evolved it, and as a lover of story-focused adventures I enjoyed navigating Milo and Lola through Hell, while almost in constant conversation with either one another or supporting characters. Afterparty switches throughout its story to either character depending on who is the most integral to the current chapter, and constant dialogue options that appear as thought bubbles above their heads allowed me to take some sense of ownership as the story progressed.

Aftaerparty often found emotionally devasting ways to tell me how I morally messed up.

Twisting that formula around this time, though, is the introduction of a selection of very unfine and horrifying cocktails. Each bar in Hell – you’ll visit a distinct handful – has its own menu, with drinks that liberate Milo and Lola from their inhibitions in different ways. The Literally Acid drink might allow you to say something more energetic, while a Bloody Stool will have you acting like a hopeless romantic. As in life, insightful or awkward comments can be helpful or harmful depending on who you’re trying to charm, strongarm, or impress. Often, the story places you at a specific bar for a specific reason, and so the handful of drink selections provide different options for emotional states – some more obviously helpful in a given situation than others. But they almost always offer a fun alternative dialogue line.Afterparty throws a couple of minigames into the fray, with “victory” just one beer pong match or dance competition away. I say “victory” in quotes, though, because almost every choice in Afterparty comes with some moral complicating factors. Even when picking what I thought would give me the best outcome, or be the most honorable thing to do – which were not always the same thing – Afterparty would find devastating ways to tell me how I had messed up. Thinking I made the right choice by saving the soul of an innocent man from eternal damnation actually proved to make my, and much of the supporting cast’s predicament more difficult in the endgame.

Though even when it felt like I “messed up” an encounter, Afterparty didn’t throw me to a Game Over screen. The party keeps moving whatever choice I made, and I had to live with the consequences of that, all the way through to a satisfying ending that made my decisions feel like they had some weight to them. It has me itching to return to the world to see how else these characters’ lives may have played out if I’d been better at reading the room, but my first run felt like an honest and true ending to the path I often pushed Milo and Lola down. Oh, and it has one of the best cut-to-credits scenes in a game I can remember.