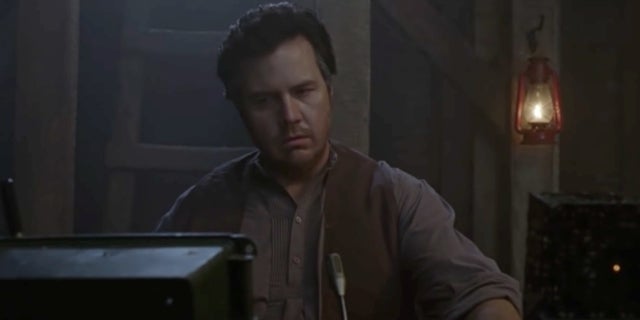 The preview for The Walking Dead 10×06, “Bonds,” reveals the next episode will follow up on the major tease that ended Season 9. There King Ezekiel (Khary Payton), after merging the Kingdom with the Hilltop colony, left the room before Hilltop made contact with an outside community over the long-range radio built by Eugene (Josh McDermitt). In episode 10×04, Eugene elected to temporarily stay behind at Hilltop to oversee the development of a new wall after a collapsed tree — secretly toppled by the Whisperers — exposed the colony to a flood of walkers. While at Hilltop, Eugene will be on hand to make contact with a new community that could be the Commonwealth.

In the preview for “Bonds,” while operating under the CB handle “Taterbug,” Eugene is surprised when a female voice says, “Hello?” In The Walking Dead comic books, Eugene first makes contact with an unidentified woman in issue #151.

Eventually, Eugene’s radio penpal later reveals herself to be Stephanie, a radio operator who introduces the communities to the Commonwealth, an Ohio-based network of more than 50,000 survivors linked across different settlements. The Commonwealth ultimately proves to be the endgame for The Walking Dead comics.

Showrunner Angela Kang previously confirmed with ComicBook.com Season 10 would follow up with the currently unidentified voice on the radio.

“I don’t want to give too much away about that, but I will say we will get answers to that question within Season 10,” she said. “It’s always interesting for us to introduce new people into our world, and the different ways they come in, so that will definitely be an important aspect of the story going forward.”

Kang later told EW “there’s some fun to be had” through the introduction of this unseen radio operator and what it means for the greater TWD Universe.

“It’s part of the fun mystery of the season, and it will come into play in hopefully interesting ways that turn the story. I can’t tip too much about, but I think there’s some fun to be had there,” she teased before confirming Eugene will “definitely be playing a role in the story.”

“He’s certainly the one that has been helping set up these ham radios throughout all the communities. There are ways in which he is very involved,” Kang added. “He’s tech support in the apocalypse. He makes some interesting discoveries and there is a hopefully very cool, satisfying story there.”

New episodes of The Walking Dead Season 10 premiere Sundays at 9/8c on AMC. For more TWD intel, follow the author @CameronBonomolo on Twitter.