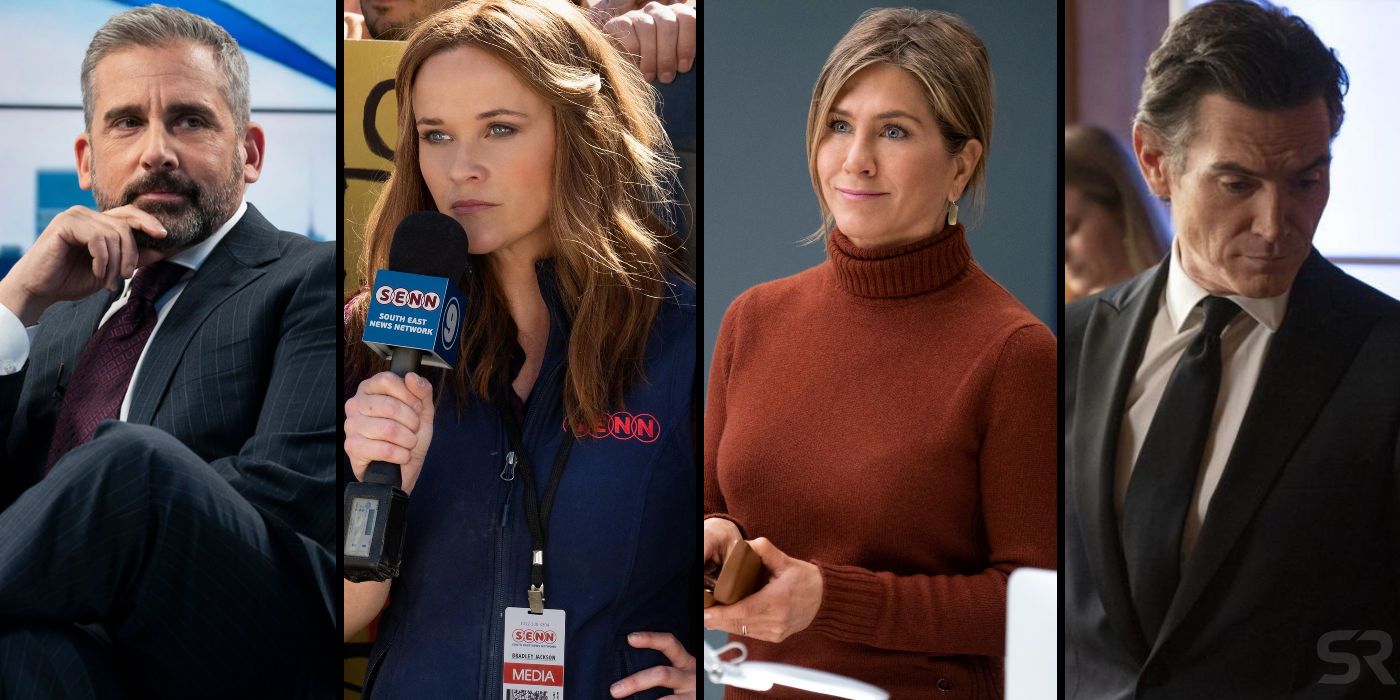 Apple TV+’s The Morning Show cast is filled to the brim with top talent from across the industry – along with many familiar faces but also some not-so-familiar ones. The new series headlines the lineup for Apple TV+’s launch, and it was created by Jay Carson, the former press secretary for Hillary Clinton.

The Morning Show follows all the daily drama of a popular New York City television network. After a lead anchor is fired for allegations of sexual misconduct, his long-time partner is forced to make some difficult decisions, one of which involves playing nice with her potential successor. Like past network-themed productions, The Morning Show explores how executives and on-air personalities use insider information to their advantage.

Related: Every TV Show Available On Apple TV+ At Launch

For The Morning Show, Apple TV+ enlisted an all-star ensemble cast, along with various high-profile guest stars. The Morning Show also features a recurring cast of performers that many streamers will immediately recognize. Here’s everyone that appears in The Morning Show cast.

Mark Duplass as Charlie “Chip” Black: The executive producer for TMS who receives a tongue-lashing from Bradley Jackson. A prolific actor and filmmaker known for starring in The League, Mark Duplass currently portrays Tom Wyatt on Goliath and voices Val Bilzerian in Big Mouth.

Gugu Mbatha-Raw as Hannah Shoenfeld: The head booker for TMS who pressures a sexual misconduct victim not to speak with a competing network. Gugu Mbatha-Raw has starred in Black Mirror, The Cloverfield Paradox, and A Wrinkle in Time.

Néstor Carbonell as Yanko Flores: One of TMS anchors who covers up a romance with a co-worker. Néstor Carbonell portrayed Mayor Anthony Garcia in The Dark Knight and Richard Alpert in Lost.

Karen Pittman as Mia: A TV producer who looks after Bradley Jackson. Karen Pittman portrays Lenore Pool in Living with Yourself, and previously had notable roles in Luke Cage and The Americans.

Bel Powley as Claire Conway: She has a secret relationship with Yanko Flores. Bel Powley starred as Minnie in The Diary of a Teenage Girl.

Victoria Tate as Rena Robinson: An administrative employee for TMS. Victoria Tate previously had a small role in Starlet.

Desean Terry as Daniel Henderson: An anchor at TMS who is asked to be softer and more accessible. Desean Terry is best known for roles in Scorpion and Shameless.

Shari Belafonte as Julia: A stage manager at TMS. The daughter of iconic performer Harry Belafonte, Shari Belafonte is best known for starring in the ’80 series Hotel.

Mindy Kaling as Audra: The host of a rival network who congratulates Alex Levy at an awards show. Mindy Kaling rose to fame as Kelly Kapoor in The Office, and later created and starred in The Mindy Show.

Marcia Gay Harden as Maggie: A New York Magazine journalist who hosts the Leadership in Journalism awards show. Marcia Gay Harden is known for acclaimed movie performances in Pollock, Mystic River, and Into the Wild.

Martin Short as Movie Director: A movie director who admits to a sexual relationship with a young actress. An iconic comedic performer, Martin Short rose to fame on Saturday Night Live.

Diana-Maria Riva as Charlene: In the past, Diana-Maria Riva has appeared in the movies What Women Want and Short Term 12, and also portrayed Detective Ana Perez in Dead to Me.