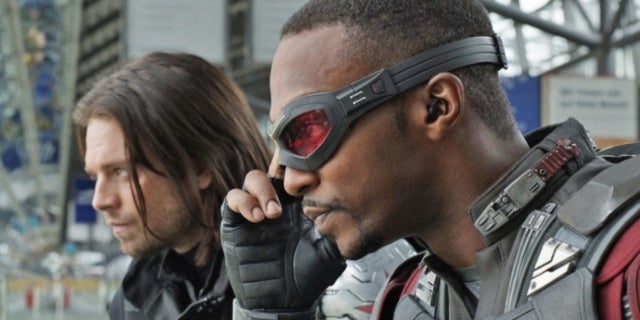 Phase Four of the Marvel Cinematic Universe is beginning to take shape, with fans knowing exactly how many blockbuster movies and television shows the franchise has in store for the next few years. The new “Phase” will include several original series on the Disney+ streaming service — and it looks like the inaugural one, The Falcon and The Winter Soldier, has officially begun filming. Malcolm Spellman, who will serve as an executive producer on the upcoming series, recently took to Twitter to share a photo of his personalized chair on set. In the caption, Spellman says that it is “Day 1”, and that it’s “a huge day for a lot of people”, including himself.

The series will see the return of Bucky Barnes/Winter Soldier (Sebastian Stan) and Sam Wilson/Falcon (Anthony Mackie), in a new adventure that is presumed to be set after the events of Avengers: Endgame.

“I’ll tell you I have [seen scripts],” Stan said during a recent convention appearance. “I have seen them and I’m so excited about it. It’s going to be so cool and kind of crazy. All I can say is it’s just new and different from what you’ve seen so far. I mean, it will be totally in line with everything that has happened and what we’ve seen and so on, but these characters are getting such additional mileage in terms of learning about who they are now, what they feel, what they’re thinking, and there’s a lot of action, comedy, you know there’s going to be comedy. I feel like you’re going to be happy. I think you’re going to be very happy. And there’s some crazy stuff, like stuff you don’t see coming from anywhere.”

The Falcon and The Winter Soldier is expected to see the return of Emily VanCamp as SHIELD agent Sharon Carter, as well as Daniel Bruhl as the villainous Baron Zemo. The series will bring the debut of John Walker/US Agent, as played by Wyatt Russell.

Are you excited to see that The Falcon and The Winter Soldier has begun production? Share your thoughts with us in the comments below!

What to Watch: Girl in the Picture, Big Brother, Black Bird
3 questions for the startup market as we enter Q3
Sam Asghari Calls Married Life with Britney Spears ‘Surreal’
Dakota Johnson On What Her Off-Camera Relationship With Fifty Shades Co-Star Jamie Dornan Was Like While Filming The Movies
There’s a change happening to Earth’s outer core, as revealed by seismic wave data