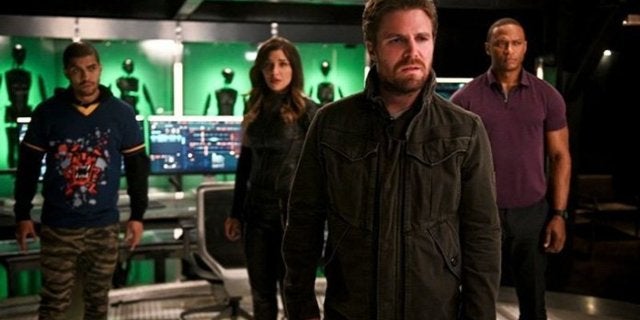 Tuesday night’s episode of Arrow ended in a stunning and game-changing way. After traveling to Nanda Parbat to find out more about Mar Novu/The Monitor, Oliver unexpectedly finds himself back in the Arrow bunker with his team. However, he’s not the only unexpected visitor. Oliver — and the viewer — soon learns that Mia, William, and Connor from the future have also mysteriously arrived. It was a surprising twist, but fans aren’t the only ones caught off guard. Arrow star Stephen Amell says Oliver is, too.

Speaking with TV Guide, Amell explained that Oliver is “flabbergasted” but professionally, it’s a scene between Oliver and the adult William (Ben Lewis) that may be his favorite.

“He’s flabbergasted, obviously,” Amell said. “He doesn’t really know what to do with Mia. I think actually the coolest interaction … doesn’t actually come between Oliver and Mia. It comes between Oliver and William. The scene, my first sort of big one on one scene with Ben, straight up might be my favorite scene this year.”

And based on the episode synopsis for next week’s “Present Tense”, it won’t just be a family reunion that Oliver and the team will experience. Echo Kellum, who played Curtis Hold/Mr. Terrific on Arrow previously, is returning for the episode. You can check out the synopsis below.

ECHO KELLUM GUEST STARS – When a mysterious new Deathstroke appears in Star City, Oliver (Stephen Amell) and Team Arrow insist on taking down this villain themselves. Meanwhile reeling from the loss of one of their own, the future Team Arrow figures out a new way to try and stop JJ. Kristin Windell directed the episode written by Oscar Balderrama & Jeane Wong (#804). Original airdate 11/5/2019.

Arrow is currently in its eighth and final season, a ten-episode run that will bring the story of Oliver Queen (Stephen Amell), Felicity Smoak (Emily Bett Rickards, who exited the series at the end of last season), John Diggle (David Ramsey), and the rest of Team Arrow to a close. The series’ end will coincide with The CW’s “Crisis on Infinite Earths” mega-event, which will run for five episodes over December 2019 and January 2020, featuring episodes from Arrow, The Flash, DC’s Legends of Tomorrow, Supergirl, and Batwoman. That seems particularly meaningful since in Arrow’s season seven finale, The Monitor arrived to tell Oliver and Felicity that Oliver would need to join him — and that he would not survive the experience of helping The Monitor defend the multiverse in the Crisis.

Arrow airs Tuesdays at 9/8c on The CW.