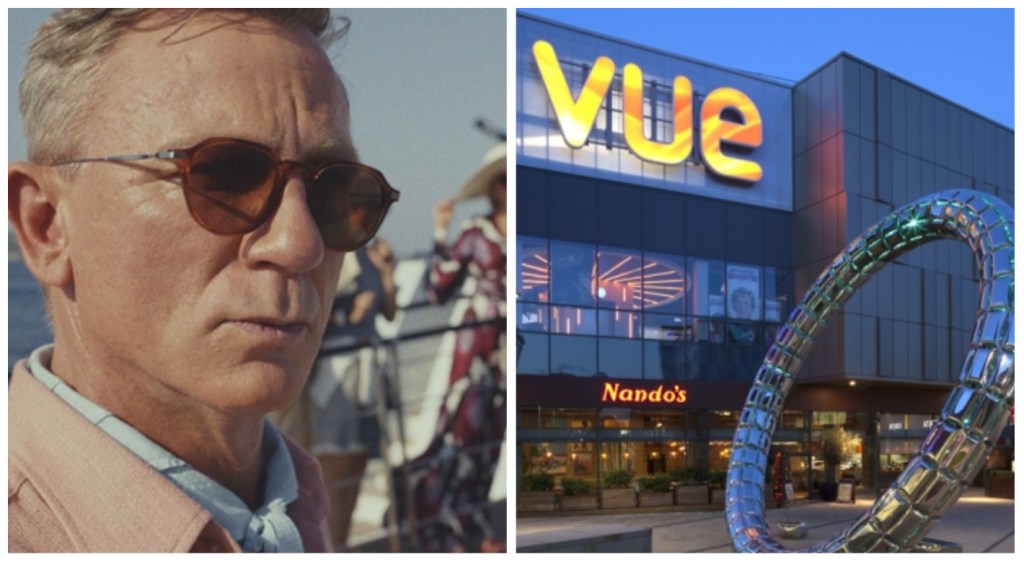 EXCLUSIVE: In an unprecedented move, Netflix and major exhibition circuits in the U.S. and UK recently agreed a 30-day theatrical window for Rian Johnson’s Glass Onion: A Knives Out Mystery. This comes after years of discussions on finding “a way forward to show their high-quality productions on our screens,” says Tim Richards, founder and CEO of Vue International which will be showing the anticipated sequel in its theaters in the UK, Germany and Italy.

Richards sat down with Deadline to talk about how the agreement came together and share his thoughts on the future evolution of windows with Netflix and other platforms. “We’re hoping that Apple are going to be doing the same thing,” he says in the Q&A below.

Under the current deal, Glass Onion will be released for one week in cinemas beginning November 23. After the initial frame, it will enter a three-week blackout period before becoming available to subscribers on Netflix. Regal, AMC and Cinemark will be playing it in 600 North American cinemas, with Regal owner Cineworld also showing it in the UK.

Richards hopes that Netflix will embrace this theatrical model and that this move will prove to be “very accretive” for the streamer, saying “We all win if this works.”  Netflix on Tuesday, however, struck a somewhat different tone to that of Vue with whom we spoke earlier this week.

So, is this the new way forward?

(The conversation below has been condensed and edited for clarity.)

DEADLINE: Vue and other major chains have in the past been vocal about not playing Netflix movies. It seemed the parties were at odds, but have now come together. Why the shift?

TIM RICHARDS: I think there was an attempt to make it look like good guys and bad guys, and that was not the case. We love Netflix and we love their movies. The frustration was that they weren’t releasing their movies to cinemas globally. There was no war going on, we were just trying to work with Netflix, nothing more than that.

A lot of operators have been playing Netflix movies day-and-date, but this is the first time Netflix have released a film respecting the theatrical release window, embracing a model that has been in place for close to 100 years.

DEADLINE: How did this agreement get hammered out?

RICHARDS: We have been meeting with the Netflix team for the best part of two years to try and discuss a way forward to show their high-quality productions — both television and movies — on our screens. That’s why we’re really excited about this next step in our relationship.

Netflix have an incredible library and some very, very talented filmmakers and we’re excited to be working with them for, really, what we hope is the beginning of a lot more films going forward.

DEADLINE: You’ve had conversations for years, so what do you think it was about this movie that finally prompted a breakthrough?

RICHARDS: This is a work in progress. The movie itself is a great movie to start with because it’s on the back of a very successful first movie, and for everyone that has seen it it’s as good if not better than the first one. Our hope is that we will be able to demonstrate that this will be very accretive for Netflix and it will not affect their subscriber base. In fact, it might even help in the way it does with mainstream studios in that it will drive up demand and awareness of the film for their subscribers to see.

The model for the 30 years that I’ve been in the business, and probably for 100 years of the industry, has been that a theatrical release is the driver of all of the ancillary revenue streams. We all know that 2019 was $43B of box office and we believe that Netflix will help contribute and drive that global box office in the future.

DEADLINE: So, upside for everybody? What about Netflix subscribers?

DEADLINE: Is there anything to the fact that Glass Onion is a film that skews a bit older since that’s been the demo that’s harder to get back in cinemas? It will be interesting to see who comes out and who decides to wait…

RICHARDS: I think there’s a demand for high-quality content from all demographics and all groups globally. What we have seen since the pandemic is some of the biggest movies of all time. We’ve seen Top Gun grossing nearly $1.5B, we’ve seen smaller films like Belfast in the UK gross over £16M. There’s a demand for everything, but we need content. ComScore reported that there are 37% fewer movies released this year than in 2019; we are desperate for movies and that’s why we’re hoping that Netflix will start producing the movies for us as well.

DEADLINE: What terms do you have for the split with Netflix on Glass Onion? Is it just as you would with any other studio?

DEADLINE: What is Netflix doing about marketing on the film?

RICHARDS: Whilst we are also working closely with Netflix, they have appointed local independent distributors, experienced in promoting cinematic releases, to deliver and promote the release: Altitude in the UK, 24 Bilder in Germany and Lucky Red in Italy.

The key to unlocking successful, high-quality films, is also marketing and promoting them. This will  be the first time that Netflix will be assisting, promoting, advertising and helping launch the film to make sure it’s a success. Showing your film on the big screen can play a big part in marketing and promoting great content, as well as increasing the film’s revenue as it won’t stop people watching it at home either.  Recent research has shown that the more you stream, the more you go to the cinema so the two are very much complementary and part of the same ecosystem.

We’re seeing good signs from initial pre-sales in the UK, thanks to organic media coverage and our marketing efforts and we hope that Netflix’s promotional efforts will further amplify this.

DEADLINE: If this sort of experiment is repeated, how do you think Netflix would handle marketing and promotion going forward?

RICHARDS: We can only look at what, as an example, Amazon has done. They’ve recognized that they didn’t have the global infrastructure to promote and market films like the studios do, and MGM have done a deal with one of the best promoters and marketers of films in the world with Warner Bros, which I think is a very clever move.

DEADLINE: Throughout the course of your discussions, presumably there has always been a movie that you wanted, ie, it’s been a rolling situation rather than OK, let’s look forward to November 2022…

RICHARDS: Correct. There’s been all kinds of Netflix films, like The Gray Man or Don’t Look Up. You know, there’s all those movies that are big theatrical films and you can imagine watching Power of the Dog  — those incredible panoramic scenes — on a big screen. That deserved to be seen on a big screen.

DEADLINE: So on Glass Onion, you agreed on a 30-day window, but only have the movie in your cinemas for a week. Would you have liked more?

RICHARDS: We would love to play it on more screens for the whole month, but we understand this is a first and very important step for Netflix into theatrical releases and we thank them and embrace the move forward.

DEADLINE: Do you think it will evolve?

RICHARDS: Yes, I think it will evolve because, again, you can’t discount $43B in box office… We are big fans and supporters of Netflix and we all win if this works, so our hope is this is going to be the first of many to follow and the beginning of a new relationship with what could be an important new studio.

DEADLINE: And you see a potential for similar arrangements with other platforms, you’re in conversations with everybody?

RICHARDS: Yes, absolutely. We’re hoping that Apple are going to be doing the same thing.

RICHARDS: (Laughs) We love movies, our customers love movies and there’s high-quality content and there’s a demand, we’ve proven, to watch that content. We know that for the last 100 years we’ve been counter-cyclical to economic downturns as an industry so this is a great time to release films. Because of the pandemic, the films started really in earnest being greenlit and worked on last summer so we’re not going to see a full roster of films again until probably sometime in middle/back end of 2023; there’s no better opportunity now and for the next six months because we’ve got very few movies to release.

We would also love to show high-quality television on our screens. We would love to show the full range of content from a Game of Thrones right down to a Queen’s Gambit and everything in between. We worked with Endemol (now Banijay) years ago when Big Brother came out and did first and last nights. There is a demand for content right now for out of home entertainment like never before.

DEADLINE: Is this something you are exploring with, say, HBO and others?

RICHARDS: It’s something that we are currently exploring with everyone. I think the term “subscription services” will be blurred very significantly. Amazon arguably are a studio now after their acquisition of MGM.

DEADLINE: What would the model be for showing TV series?

RICHARDS: This is something I’ve wanted to do for a long time. When 24 originally came out, I was a big fan of it and I wanted to show it on our screens. We looked at doing one hour, two hours and we even looked at doing a marathon in university towns of 24 hours. We got caught in licensing hell in LA, nobody knew who had the rights in those days. Now, the rights are considered and provided for when the deals are being done so we have an opportunity to monetize television as well as feature films on our screens.

Because they are one-off or two screenings, then they would not be subject to a theatrical release window. We would be testing a few different models, but we would likely be doing one or two episodes a week over the course of four to six weeks and getting our customers used to coming out on a specific date, a Tuesday night or Wednesday night, so they know Tuesday night is Game of Thrones night for the next six weeks or whatever else it might be.

DEADLINE: In a concurrent manner? Like when a show launches on a service, or even if it’s already been running?

RICHARDS: Correct. Whatever the date is, we’re flexible. We could do it day-and-date, but because it is not a screening of a film for an extended period of time, then it’s not subject to a theatrical release window.

DEADLINE: Looking at the big picture, we had a rough run these past few months. How punishing has that been and what is your assessment of the landscape?

RICHARDS: It’s been very challenging because we need movies desperately. I think in terms of the demand, you can see the performance of Smile. I can’t remember any movie increasing at the rate that Smile has. It just speaks to the demand, but we don’t have the supply right now. There’s a lot of big movies coming out with Black Adam and Black Panther and Avatar, then Babylon in January; there’s a lot of movies coming out but we don’t have the normal volume of films and that’s why you see it’s no surprise that box office is down 30% when films being released are down 37%.