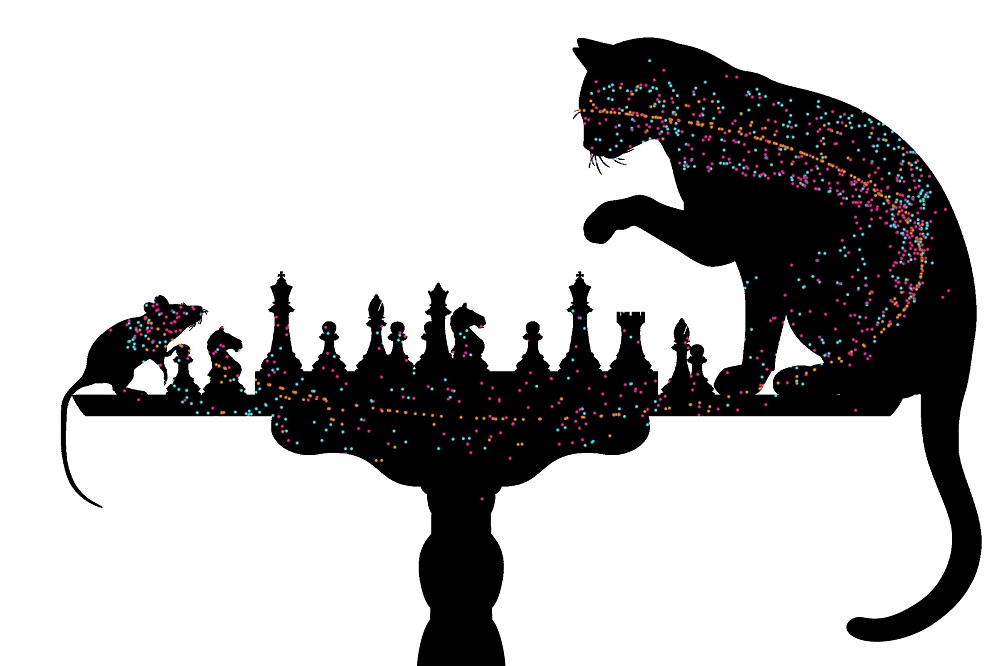 Soon after a pair of Chinese satellites reached geostationary orbit early this year, space surveillance satellite USA 270 maneuvered to get a closer look at its new neighbors.

As USA 270 closed in on Shiyan-12-01 and Shiyan-12-02, the Chinese inspection satellites took off in opposite directions with Shiyan 12 02 moving into position to get a sunlit view of the U.S. surveillance satellite.

“It’s pretty clear that as USA 270 gets close, these guys are getting out of Dodge,” said Dan Oltrogge, COMSPOC Corp. research director. “It also demonstrates that countries are doing what we call counterspace. They’re taking action to avoid disclosure of their capabilities or their activities.”

This sort of geostationary orbit cat and mouse is happening with greater frequency than ever before, according to space traffic experts. U.S. military satellites have kept tabs on the geostationary orbit belt since the 1990s. In the last few years, Russian and Chinese reconnaissance satellites have followed suit, cozying up to government and commercial satellites in ways that U.S. government officials find disturbing.

“The U.S. is very concerned about what other countries might be able to find out about the capabilities of those satellites and about being able to protect them,” said Brian Weeden, Secure World Foundation director of program planning. The Secure World Foundation, for its part, is “concerned that the ambiguity over some of these actions and that heightened tensions could lead to some sort of conflict, to mistakes or misperceptions,” he said.

Geostationary orbit is not what it used to be.

While not nearly as crowded as low Earth orbit, traffic is increasing in this valuable orbital real estate where satellites can maintain a constant view of terrestrial regions. In mid-April, there were 589 operational satellites in geostationary orbit, up from 480 in 2017.

“That’s not anything like the huge increase in the number of active low-Earth orbit satellites, but at the same time, GEO is a very special, almost fragile orbital shell because your orbital period is 24 hours,” Oltrogge said. “One collision or explosion could spread very quickly throughout the GEO belt. It requires careful allocation and assignment of spacecraft for both conjunction-assessment purposes and to make sure you don’t have RF interference.”

In the past 10 years, China, Russia and the United States have sent satellites “shuffling back and forth in the GEO band, doing various tasks that we didn’t use to see in GEO,” said Jonathan McDowell, an astronomer and spaceflight analyst. “The point of GEO is to be able to stop at one place relative to the Earth.”

Instead, some satellites drift or maneuver to perform rendezvous and proximity operations. Two Mission Extension Vehicles from SpaceLogistics, a Northrop Grumman subsidiary, for example, have docked with Intelsat communications satellites to take over station-keeping.

While that mission is widely lauded, U.S. military leaders expressed concern when China’s Shijian-21 space debris mitigation satellite grabbed a defunct Beidou navigation satellite and hauled it 3,000 kilometers to the graveyard above the GEO belt.

Removing obsolete satellites from the geostationary belt is a valuable service. The same technology, though, could have more nefarious applications.

“Shijian-17 and Shijian-21, which are satellites with robotic arm technology, could be used in a future system for grappling and disabling other satellites,” U.S. Army Gen. James Dickinson, Commander of the U.S. Space Command, told the Senate Armed Services Committee in March.

Even close approaches, which in geostationary orbit are measured in tens of kilometers, can expose satellites to unwanted scrutiny.

“You can imagine taking the full variety of intelligence, surveillance, reconnaissance capabilities that we have on satellites to look at the Earth and putting those on a satellite and look at other satellites,” said Weeden, a former U.S. Air Force officer. “Think thermal, radar, lidar, hyperspectral as well as optical imaging.”

“No matter how tight your focus, your radio frequency beam is going to spill over a little bit,” Weeden said. “That suggests if you put a satellite close enough to another satellite, it’s probably possible to eavesdrop on the signals being sent up.”

Former French defense minister Florence Parly made that clear when she accused Russia of trying to intercept communications directed toward the French-Italian geostationary military communications satellite, Athena-Fidus, with a Luch satellite.

“Trying to listen to your neighbors is not only unfriendly, it’s an act of espionage,” Parly said in 2018.

The veil of secrecy began to lift in 2014 when the U.S. military revealed the existence of Geosynchronous Space Situational Awareness Program (GSSAP) satellites. Gen. John Hyten, then commander of Air Force Space Command, said in 2015 that GSSAP’s declassification was meant to show the world that the U.S. military was watching everything happening in orbit. The fifth and sixth GSSAP spacecraft, built by Northrop Grumman, were launched in January.

Even after 2014, spy satellite maneuvers were largely invisible until firms like COMSPOC and ExoAnalytic Solutions began publishing observations and analyzing information gleaned from global sensor networks. At the Space Symposium in April, an ExoAnalytic display showed the movements of USA 270 and Shiyan 12 satellites.

“People are monitoring these orbital regions and making the evidence of who’s doing what to whom as public as possible,” said Moriba Jah, an associate professor of aerospace engineering at the University of Texas at Austin and chief scientific adviser for space sustainability startup Privateer. “That level of transparency is probably going to curb some behavior.”

Still, there are no international laws or even norms that define when and how unrelated satellites should approach one another in geostationary orbit, making it hard to define suspicious activity. Is a satellite drifting to survey its orbital neighbors, or is the satellite being checked out before moving to its assigned orbital slot?

“You have to be careful in jumping to conclusions,” McDowell said. “When you say, ‘That satellite moves next to mine to spy on me,’ that may be true. Or maybe that was the only free space they could find to park for a while.”

As geostationary traffic picks up, so do calls for norms of behavior.

“Satellites should maintain safe separation and safe trajectory” was one of the Tenets of Responsible Behavior outlined last year by U.S. Defense Secretary Lloyd Austin. But what is a safe separation in geostationary orbit? 10 kilometers? 20 kilometers?

In 1972, the United States and the Soviet Union signed an agreement called Prevention of Incidents On and Over the High Seas to prevent maritime or aircraft collisions from sparking World War III. One provision of the agreement required surveillance ships to maintain a safe distance from the object they were investigating.

“There’s discussion about developing something like that agreement for space,” Weeden said. “The problem is defining what is ‘too close’ in space is very difficult. Close is more a function of energy and delta-v than of distance. More communications between satellite operators could also head off conjunctions.

Satellites moving to different orbital slots sometimes raise or lower their altitude to drift. “You could suddenly be approaching another satellite near you that doesn’t know you’ve done that maneuver,” Oltrogge said. “Increasingly, commercial satellite operators are willing to share their ephemeris and maneuver plans.”

Even for military satellites, there should be more communications between countries involved regarding close approach, Weeden said. Lt. Gen. B. Chance Saltzman, U.S. Space Force deputy chief of space operations, has suggested establishing hotlines between the U.S. and foreign rivals. In the Middle East, the U.S. and Russia established a hotline to prevent miscommunication regarding aircraft operations near Syria.

“I don’t see any reason why a similar approach couldn’t work for the space domain,” Saltzman said in November.

This article originally appeared in the June 2022 issue of SpaceNews magazine.