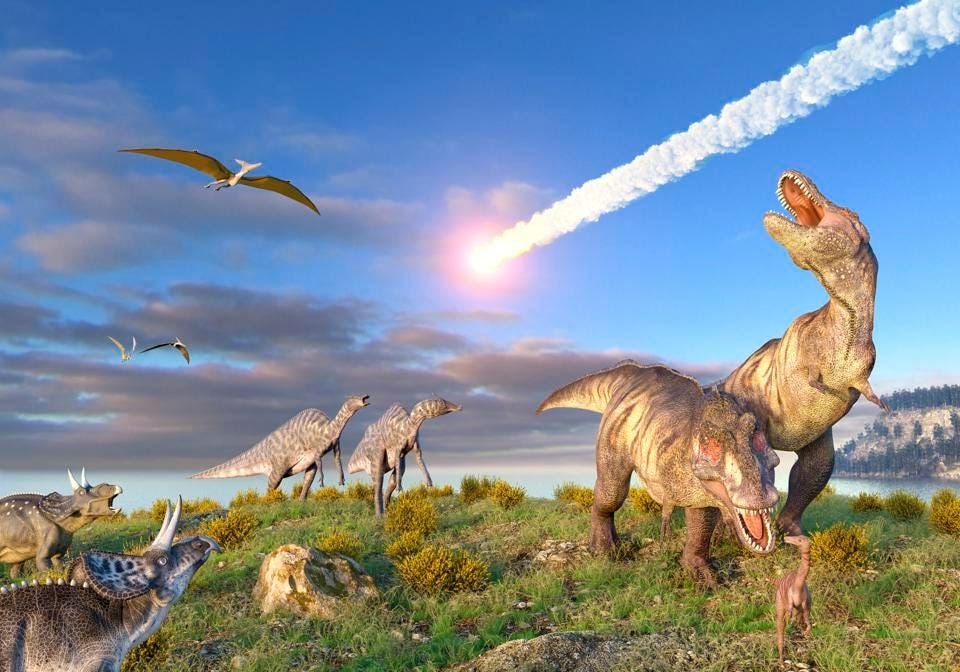 On an ordinary morning 66 million years ago, the dinosaurs, and all the other life forms on Earth, were spending their morning like they had so many mornings before, eating breakfast, taking care of their kids,[i] and maybe even going out to the water to enjoy a dip. But this morning wouldn’t turn out to be like every other morning for them. You see, there was this thing called an asteroid, something they had no concept of and no way to protect themselves against.

Nonetheless, this six-mile-wide[ii] piece of space gravel was headed their way and would destroy their life completely. It would kill off 80% of the species on earth. And, yes, it would erase the dinosaurs from the planet. All that would be left of them would be fossils.

The dinosaurs had ruled the earth for over 165 million years, but they had no way of changing their fate. We humans today do have a choice, a choice to protect ourselves and everything we care about. So it might be surprising to learn that our government might just be failing us by refusing to take this threat seriously. They are ignoring the sort of asteroids[iii] that rendered 80% of the species on earth extinct 66 million years ago, including the dinosaurs. They are ignoring the asteroids called Near Earth Objects, NEOs..

Scientists have been watching NEOs since 1898,[iv] first using visible light telescopes then, later, radio telescopes.. In 2026, NASA aims to take the hunt for NEOs a giant step farther. It aims to put an infrared telescope in space specifically to detect NEOs. It’s called The Near Earth Object Surveyor.[v]

But the Near Earth Object Surveyor is running into problems. NASA requested $143.2 million for the program in the 2023 budget. The budget’s writers knocked that figure down to $39.9 million, a 72% reduction. And the budget writers proposed delaying the NEO Surveyor by two years, from 2026 to 2028.[vi] Which means that we are failing at what the space community calls “planetary defense.” We are failing to defend ourselves from the next species-killing stone in the sky.

According to Bruce Pittman, former Chief System Engineer in the Space Portal Office at NASA Ames, “We need to make sure we catch these things and don’t miss the one that could wipe us out, the one that could make this planet unlivable in the most dire sense of the word…and the fact is, it’s much more difficult to do this kind of thing from the ground. You have to do it in space.”

The budget cuts assume that the odds of another species-killing asteroid are low. But here’s some nightmare material for you. There was a low probability of a highly catastrophic asteroid hitting the Earth in the dinosaurs’ time too.

In 1994, Congress directed NASA to develop a plan to discover, characterize and catalog potentially hazardous NEOs larger than one kilometer in size. In 1998, NASA formally established an NEO program in response to the congressional directive to discover at least 90 percent of one-kilometer-sized NEOs by 2008.  It’s thirteen years after this deadline, and NASA has not achieved its mission.

NEO Surveyor could make major strides in helping NASA reach its Congressionally-mandated goal.  And it could save us from going the way of the dinosaurs.

Stewart Atkinson is a writer in Texas.

Howard Bloom has been called the Einstein, Newton, and Freud of the 21st century by Britain’s Channel 4 TV.  One of his seven books–Global Brain—was the subject of a symposium thrown by the Office of the Secretary of Defense including representatives from the State Department, the Energy Department, DARPA, IBM, and MIT.  His work has been published in The Washington Post, The Wall Street Journal, Wired, Psychology Today, and the Scientific American.  He does news commentary at 1:06 am et every Wednesday night on 545 radio stations on Coast to Coast AM.  For more, see http://howardbloom.institute.