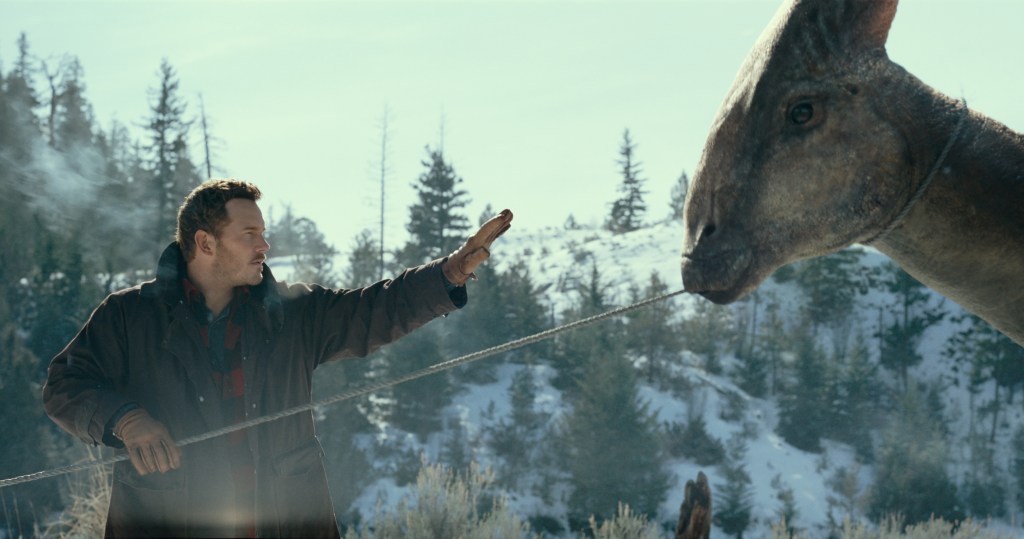 Universal closed out its CinemaCon 2022 on Wednesday with more footage from its June 10 summer extravaganza, Jurassic World Dominion, with stars Bryce Dallas Howard and Jeff Goldblum on hand to send exhibitors off.

In the footage, we see both the casts from Jurassic Park — i.e., Goldblum, Laura Dern and Sam Neill, and the Jurassic World pair of Chris Pratt and Howard — as they search for the kidnapped baby of raptor Blue while massive dinosaurs wreak destruction on land and sea. Says Dern’s Ellie Sattler, “If our world is going to survive, what matters is what we do now.”

Uni showed a sizzle reel of Jurassic World 3 at CinemaCon last year, and even showed footage at SXSW.

Before rolling the clip tonight, Howard and Goldblum were introduced to the stage by David Quincer, owner of the Starlite Drive-In Theate in Litchfield, MN. The exhibition veteran said his family had been bringing movies to the  Midwest for the past 100 years. During the pandemic, he screened Jurassic Park at his drive-in and said it was the biggest repertory title all season.

Goldblum, dressed all in black and sporting his trademark sunglasses, told exhibition attendees that “Going to movie theaters, they’ve been the most romantic and magical times of my life.” He also promised the Jurassic crew would be “going on an extensive publicity tour everywhere you can imagine. We are genuinely very enthused, we are crazed about this movie.”

A special treat will be that Dominion will be the very first film Goldblum’s kids, aged 7  and 5, will ever see in a movie theater, the actor said.

Goldblum also recalled his character’s warning from the first film that just because you could revive the dinosaur doesn’t mean you should. “That wisdom was ignored through subsequent movies,” he pointed out. Said Howard, “What would these moves be if people made the right choices?” Retorted Goldblum, “You may be on to something. Maybe that’s been the message all this time, that dinosaurs are clever and homo sapiens are ignoramuses, or is it ignorami?”

The movie comes out June 10.