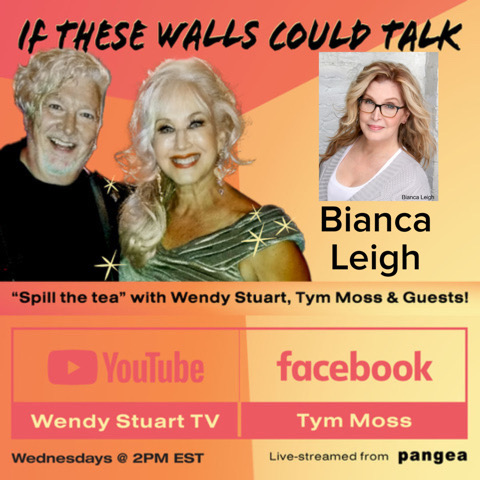 Who else but hosts Wendy Stuart and Tym Moss could “spill the tea” on their weekly show “If These Walls Could Talk” live from Pangea Restaurant on the Lower Eastside of NYC, with their unique style of honest, and emotional interviews, sharing the fascinating backstory of celebrities, entertainers, recording artists, writers and artists and bringing their audience along for a fantastic ride.

Bianca Leigh will be a featured guest on “If These Walls Could Talk” with hosts Wendy Stuart and Tym Moss on Wednesday, January 12th, 2022 at 2 PM ET live from the infamous Pangea Restaurant.

Wendy Stuart is an author, celebrity interviewer, model, filmmaker and hosts “Pandemic Cooking With Wendy,” a popular YouTube comedic cooking show born in the era of Covid-19, and TriVersity Talk, a weekly web series with featured guests discussing their lives, activism and pressing issues in the LGBTQ Community.

Tym Moss is a popular NYC singer, actor, and radio/tv host who recently starred in the hit indie film “JUNK” to critical acclaim.

REVENGE, Fanny Halcyon in the New York and San Francisco workshops of TALES OF THE CITY THE MUSICAL, Tatiana in Paul Lucas’ award-winning verbatim piece TRANS SCRIPTS at American Repertory Theatre, Beatrice in Christina Anderson’s MAN IN LOVE at Kansas City Rep, and

Dr. Rachel Sandow on LAW & ORDER: SVU. Bianca wrote and performed her solo musical BUSTED, about the challenges and dangers facing a young Trans woman in pre-Disney New York, at the Laurie Beechman Theatre. Her play, MBJrT, was part of the Monday Night Playwright Series at Kansas City Rep in 2018. She is featured in Laverne Cox’s documentary

DISCLOSURE, an exploration of Trans representation in motion pictures and on television.

Watch Bianca Leigh on “If These Walls Could Talk” with hosts Wendy Stuart and Tym Moss on YouTube here:

Subscribe and listen to “If These Walls Could Talk” on Apple Podcasts/iTunes here: