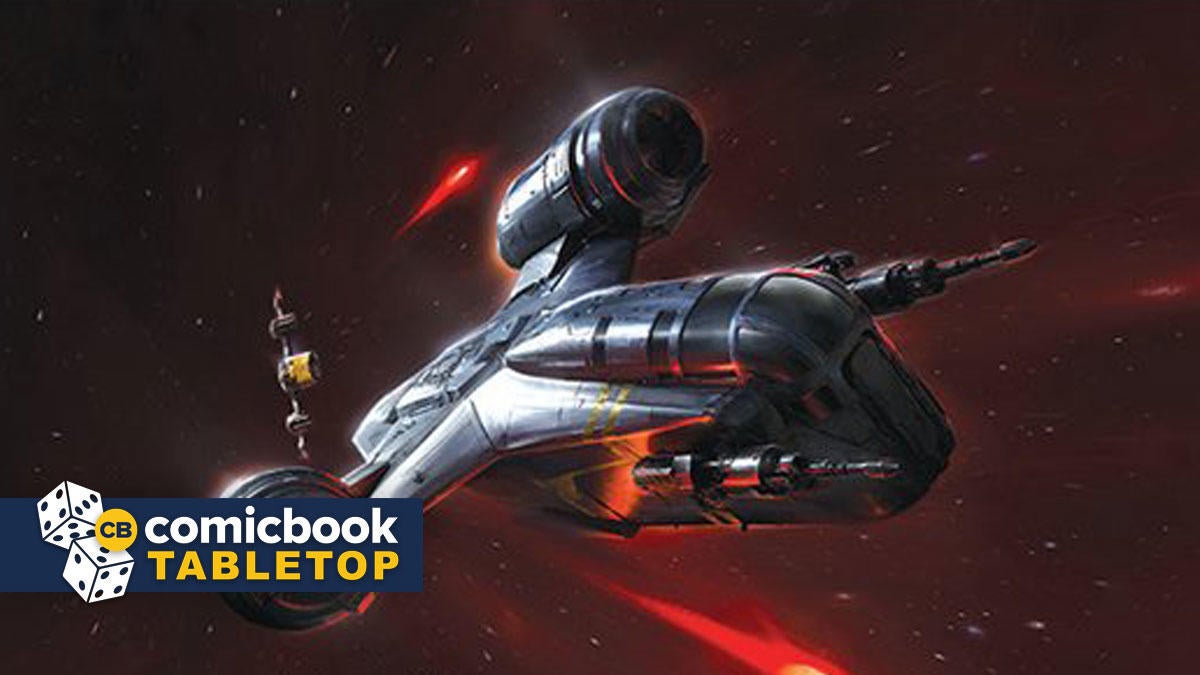 Atomic Mass Games has been busy this week, teasing new releases for all of its big franchises as part of its Ministravaganza, including Marvel: Crisis Protocol, Star Wars: Legion, and Star Wars X-Wing. There’s plenty to talk about, but one of the bigger reveals was that The Mandalorian is headed to X-Wing, and Ministravaganza gave us our first look at Din Djarin’s Razor Crest ship and miniature. The miniature is looking pretty slick, but even better is the fact that we got a look at two of the cards that come along with it.

The first card is the Razor Crest’s card, which has an Initiative of 5, an attack value of 3, an agility value of 2, a hull value of 7, and a shield of 2. The ability on the card states “While you defend or perform an attack, if you are in the front arc at range 1-2 of 2 or more enemy ships, you may change 1 of your blank results to a Focus result.”

Wherever the Mandalorian goes, the Child goes, and #StarWarsXWing is no exception. Check out these two upcoming cards that we just revealed at #Ministravaganza! #StarWars #XWing #Miniatures pic.twitter.com/9AsXicPXnH

They also revealed the ship’s dial and the crew card for The Child, aka Grogu, who gains you 2 Force but also comes with some setbacks that tie into the little guy going full blast and then tiring himself out. His card reads “Setup: After placing forces, choose an opponent; they assign the Merciless Pursuit condition to 2 of their ships. Your force loses the recurring icon. After you defend, if you suffered damage during that attack, recover 1 force.”

Hopefully, this is just the beginning of Mandalorian-themed content for X-Wing, and this is just one of the big things Atomic Mass Games talked about in regards to X-Wing, as they also covered the future of the game and changes and other elements they are introducing.

You can find the official description for Star Wars X-Wing Miniatures Game below.

“X-Wing is a tactical ship-to-ship combat game in which players take control of powerful Rebel X-wings and nimble Imperial TIE fighters, facing them against each other in fast-paced space combat. Featuring stunningly detailed and painted miniatures, X-Wing recreates exciting Star Wars space combat throughout its several included scenarios. Select your crew, plan your maneuvers, and complete your mission!

The X-Wing starter set includes everything you need to begin your battles, such as scenarios, cards, and fully assembled and painted ships. What’s more, X-Wing’s quick-to-learn ruleset establishes the foundation for a system that can be expanded with your favorite ships and characters from the Star Wars universe.”

No release date was revealed for the Razor Crest, but the X-Wing Core Set and a variety of expansions are available now, and you can find all of those right here.

Will you be picking up The Mandalorian expansion for X-Wing, and what else do you want to see? Let us know in the comments and as always you can talk all things comics with me on Twitter @MattAguilarCB!