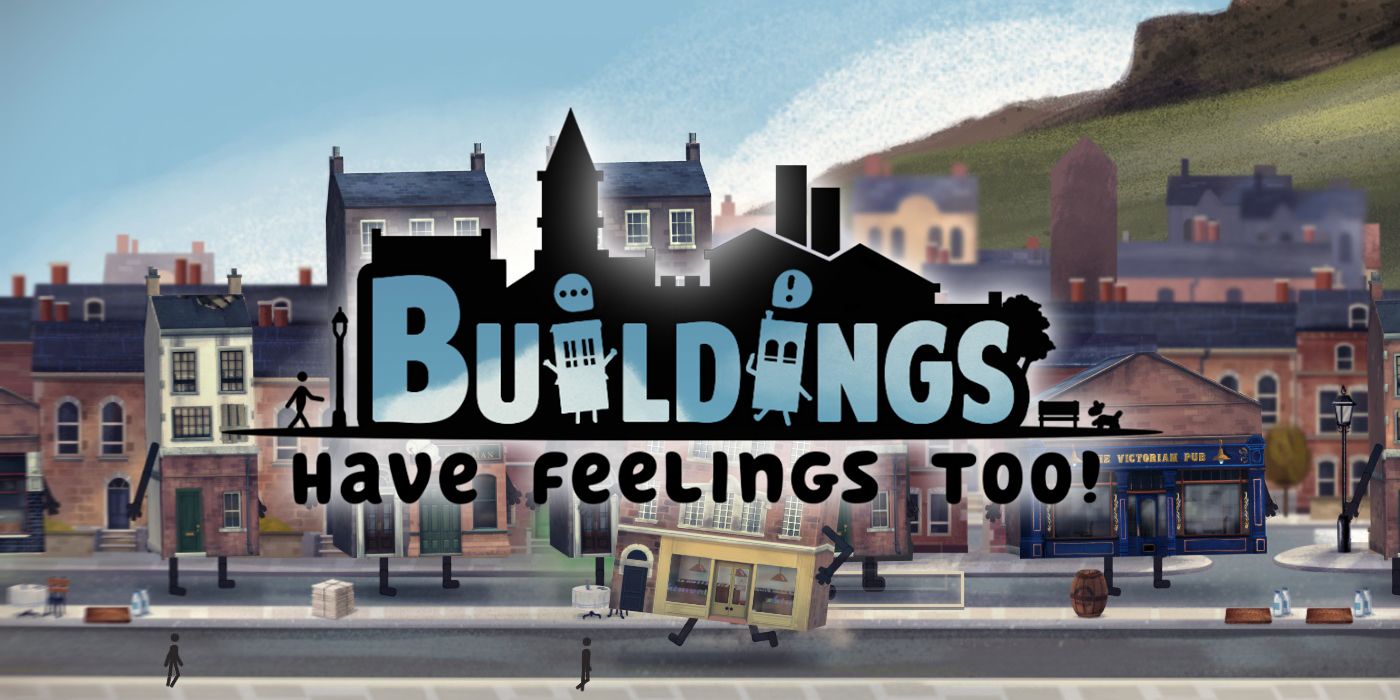 Video games have historically done a tremendous job of making players care about inanimate objects. Whether it’s the ever-beloved companion cube of the Portal games, or the simple shapes of indie platform darling Thomas Was Alone, game developers have likely made players care more about objects than they would care to admit on occasion. Following this trend is Buildings Have Feelings Too! from developer Blackstaff Games, which attempts to do the same to architectural structures.

As the name suggests, Buildings Have Feelings Too! adds a fair amount of emotional weight to the buildings of a city. The game takes the form of a side-scrolling management sim, with the player tasked with walking around and attending to the needs of streets around the city. This is primarily done by building new homes and businesses, or changing the types of businesses that are available in different areas.

Related: Journey Of The Broken Circle Review: A Platformer Looking To Become Whole

This management sim gameplay leans heavily into puzzles, as opposed to the macro-level planning of games such as Sim City. To meet the tasks required of them, the player needs the review the improvement requirements of the buildings around them, as well as the potential pitfalls that might negatively impact on neighbouring units such as pollution. The end goal is maxing out a building’s stats in order to cause a ripple effect across the street and progress.

Visually, Buildings Have Feelings Too! is successful, with an impressive design for what could have been a dry subject matter. The buildings have a cut-out style reminiscent of cult TV classic I Am Not An Animal, a particularly effective technique. Meanwhile, the joke-laden dialogue of each of the buildings is particularly charming, changing depending on the type of business the building provides.

Unfortunately, the aesthetic is the most successful part of the game. Although the main conceit of a puzzle game in a management sim’s clothing is smart, Buildings Have Feelings Too! doesn’t define its gameplay particularly well. It’s all too easy for players to get confused, particularly given an immediate emphasis on trawling through various menus to work out the best move to make next.

Buildings Have Feelings Too! also doesn’t control particularly well. On PC the game feels peculiarly clunky, especially when using a mouse and keyboard, with some serious challenges trying to place buildings correctly. Improvements are reportedly on the way, but it’s far from ideal at this moment in time, and hard to recommend for users who prefer to control with a mouse.

The game can also be rather ruthless with player mistakes. If the player chooses the wrong option, for instance when placing a building or choosing the incorrect industry for a newly-built unit, it’s not exactly easy to roll back those changes when the mistake has been realized. This means that the relaxed tone of the game’s music and characters doesn’t exactly match the gameplay, and that Buildings Have Feelings Too! feels much harder than it should do.

That said, Buildings Have Feelings Too! does have a place for those who can get to grips with its eccentricities. Players who are methodical, take their time, and are careful with their moves could find a decent little puzzler here, providing they don’t mind the occasional frustrating moment. For everyone else, however, the game’s broader problems will likely be too much baggage to make it an enjoyable experience, at the very least until some of those fixes come into place.

Buildings Have Feelings Too! is out now for PC, PS4, Xbox One, and Nintendo Switch. Screen Rant was provided with a PC download code for the purposes of this review.

Rob Gordon is a writer and musician from Brighton, United Kingdom. A Creative Writing Masters graduate from the University of Exeter, Rob has his roots in fiction writing but also has extensive experience writing about video games and the video game industry. As well as this, Rob is at home with a focus on film and television, particularly when it comes to the realms of horror. Alongside his writing, Rob plays in two UK-based musical acts, the electro-pop band Palomino Club and rock band Titans & Kings, and also lends his vocal talents to the Big Boys Don’t Cry podcast, which reviews and discusses romantic comedies. The bands and the podcast can be found on all good digital distribution platforms, and Rob can also be found on Twitter.