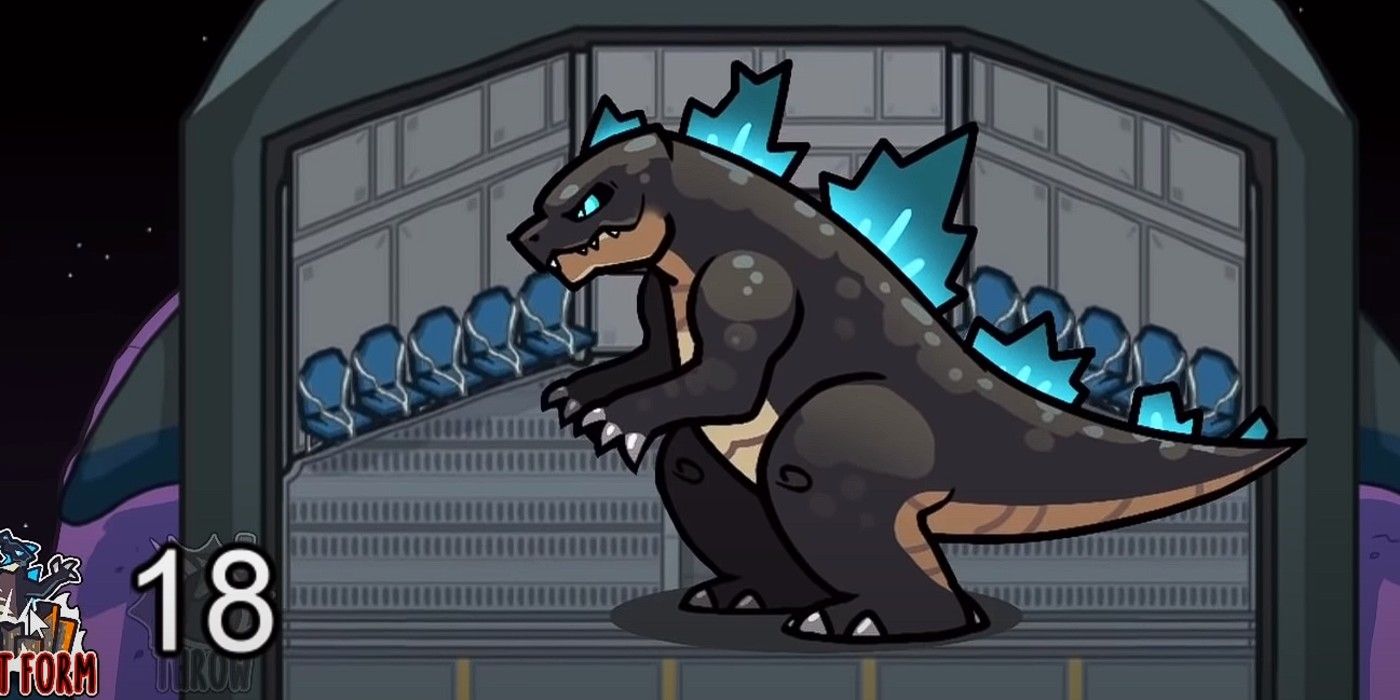 Many of the most popular Among Us mods give Impostors new roles and powers they can use to best the crewmates. Often, these mods can be unbalanced, tipping the scale in favor of an Impostor and making Among Us less about social deduction and more about survival against an adversary. Options have included modern horror icons like Slender Man and popular creatures like Vampires or even a massive T-Rex. Now, a new challenger has appeared in the form of world-famous kaiju Godzilla. The Godzilla mod for Among Us was created for streamer and content creator SSundee and friends and allows the Impostor to turn into the king of the monsters.

Related: How to Install (& Play) the Town of Us Role Mod for Among Us

The Godzilla mod grants Impostors four new powers: Shockwave, Throw, Atomic Breath, and Acid Pool. Shockwave is used to stun, while Throw, Atomic Breath, and Acid Pool are alternative ways to kill. Godzilla can also grow into their Giant Form to see the full map from a distance and better target their attacks to terrorize crewmates. Though every ability has a cooldown period, the fact that there are so many makes it possible for the Godzilla Impostor to completely decimate a crew in very little time. Here’s how to play the Godzilla Impostor Role Mod in Among Us.

How to Play As Godzilla in Among Us

The Among Us Godzilla Role Mod was programmed by @LooKuM / MRE for SSundee and his friends and is currently not available for public download. Other versions have also been programmed for  Players may have luck getting into a game that uses this mod by joining a server that has it installed. It is also possible that, given its popularity, other modders will eventually program a version of this mod and make it available for wider use.

When a player becomes the Impostor in a game of Among Us with the Godzilla Mod installed, they have the option to transform into the giant reptile, almost any time they want. While in Godzilla form, the Impostor will be able to use a variety of new abilities:

The Impostor, either in their normal form or as Godzilla, can also still access the Sabotage and Kill buttons.

Crewmates will be able to report bodies of other crewmates killed normally or by Acid Pool or Atomic Breath, though Throw seems the more popular Godzilla kill option. Because of this, the easiest way for crewmates to stop a Godzilla rampage and deliberate is by pushing the Emergency Button.

As with the Among Us T-Rex Mod, it can easily become obvious to crewmates who the Impostor is if crewmates generally stay in the same vicinity. The Godzilla Mod emphasizes survival over completing tasks or social deduction, but this gives crewmates ample opportunity to notice who of the group always seems to be missing or not seen by anyone else when Godizlla attacks. Once it becomes obvious who Godzilla is, crewmates can quickly vote that player out and still manage to win the game. Because of this, Impostors will need to be sneaky and make sure to transform out of their Godzilla form and be seen with other crewmates frequently, or frame another crewmate, to avoid suspicion.

Though this mod was demonstrated on Polus, it could easily be transferred to the new Airship Map. In fact, using the Airship Map could make the match slightly easier for Impostors, as the sheer size of the space would make it more difficult for crewmates to figure out which group member always seems to be missing when the creature attacks.

Players can see the Godzilla Role Mod in a real Among Us match in SSundee’s video below:

Next: How to Play the Infinite Kill Range Mod on the Airship in Among Us

Among Us is available for Nintendo Switch, PC, iOS, and Android.