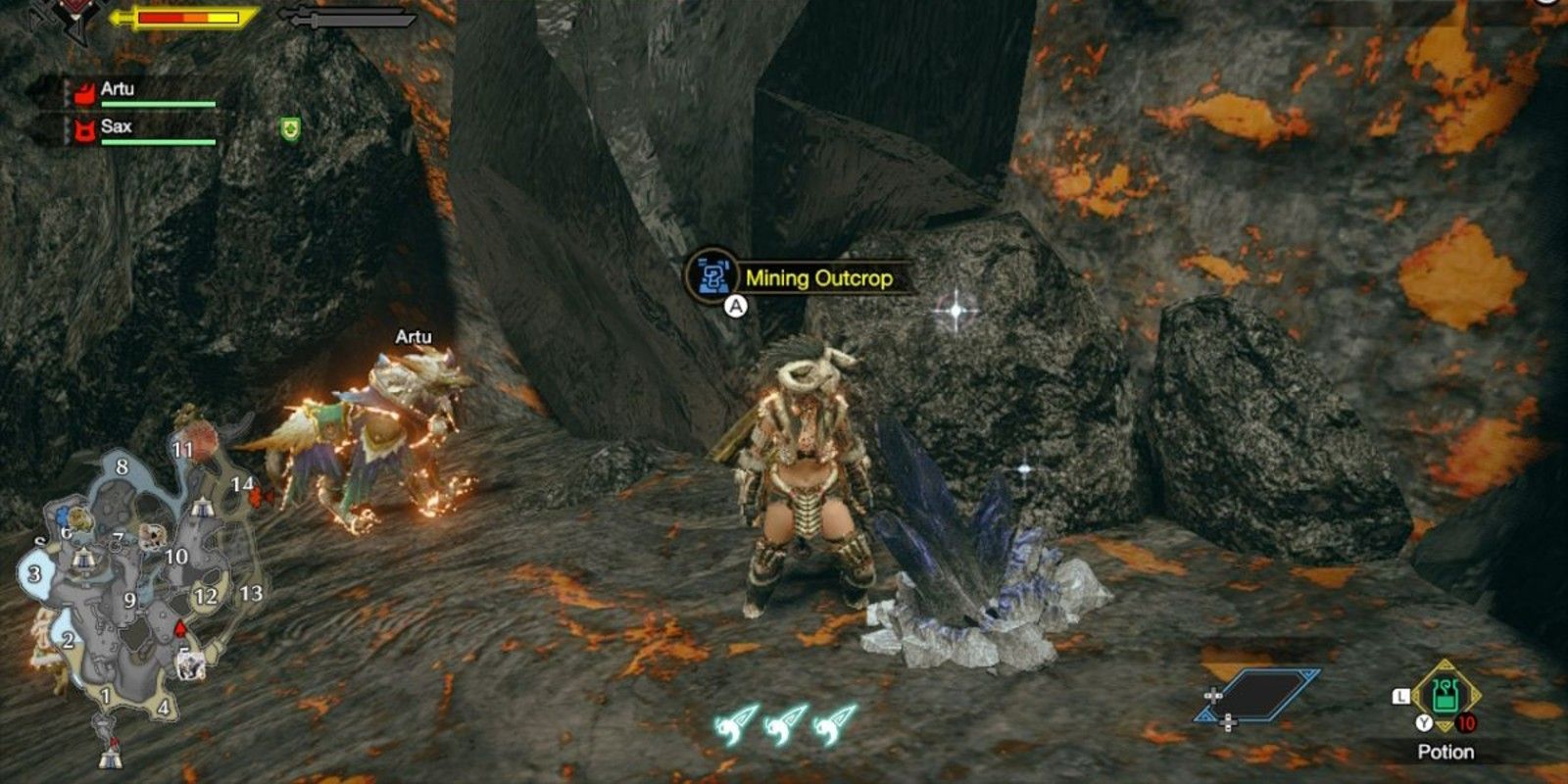 Ores in Monster Hunter Rise are very important crafting resources used to construct and upgrade weapons for both hunters and companions. As players discover new maps and take on stronger, more difficult creatures in Monster Hunter Rise, they will want to farm for better resources to improve their equipment and give them the best chance to survive the encounter. Different Ores are easier or more commonly found while Hunters are still in Low Rank, while others become common only when a Hunter reaches High Rank. Dragonite Ore is a step up from the more common Malachite Ore, and it is considered a rare drop. Dragonite Ore can really only be farmed from one map in Monster Hunter Rise: the Lava Caverns.

Related: How to Find (& Beat) Tetranadon in Monster Hunter Rise

Like mining other Ores in Monster Hunter Rise, players will need to find Mining Outcrops in the Lava Caverns to harvest Dragonite Ore. Players at Low Rank will have the best chance of getting Dragonite Ore from white deposits, while players in High Rank can find them from both white and blue deposits. Dragonite Ore is a mandatory crafting material for upgrading and crafting some of the best weapons and armor pieces, so players should make a point to begin harvesting this material sooner rather than later. Here’s how to find Dragonite Ore in Monster Hunter Rise.

Where to Find and Farm Dragonite Ore in Monster Hunter Rise

To begin farming Dragonite Ore in Monster Hunter Rise, players will need to venture to the Lava Caverns map. Rather than traditional resource veins, the Mining Outcrops in the Lava Caverns are considered unique Account Item harvesting spots. Some of them are even labeled on the map. Players will find more deposits on the lower rather than upper levels of the Lava Caverns. Players need to reveal the entire map to be able to use its features, which can usually be done after unlocking four-star quests.

Players may want to consider activating Dango Harvester before setting off to explore the Lava Caverns. This way, Hunters can reduce the time between gathering point respawns and get the most from a farming session.

Dragonite Ore is more likely to drop from white Mining Outcrops than blue ones while players are still in Low Rank. Later, when they reach High Rank, this resource will drop more frequently from both white and blue deposits.

The white outcrops will produce rarer materials but will drop fewer of them at a time. Blue outcrops have a lower chance of dropping Dragonite Ore, especially at Low Rank, but when it does drop, each outcrop can produce up to three. Ultimately, players will need to decide where to spend their time, energy, and stamina to farm the mining outcrops in the Lava Caverns.

Though Farming is the most reliable source of Dragonite Ore, it is not the only way Hunters can get their hands on the resource. Dragonite Ore is also a reward in some Subquests and missions, especially Village Quests and the ones that are given by Quest Maiden Hinoa.

Next: How to Make Money in Monster Hunter Rise (The Fast Way)