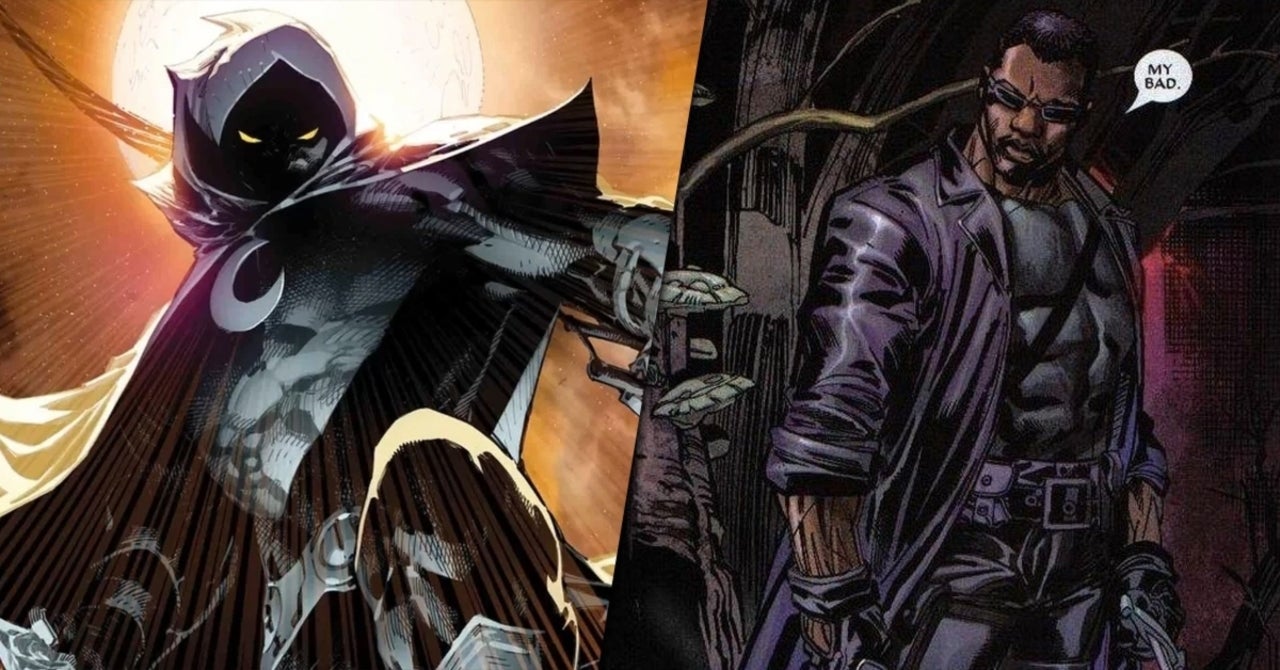 Since the moment Marvel Studios first announced Blade and Moon Knight, there has been consistent chatter amongst fans of the Marvel Cinematic Universe the two projects could crossover. Though Marvel hasn’t officially announced a crossover between the two properties to the extent it has elsewhere — like Teyonah Parris’ Monica Rambeau and Iman Vellani’s Kamala Khan appearing in Captain Marvel 2 — a team-up between the two cult classics makes sense on several fronts.

First and foremost, the two characters are Marvel’s most earnest attempt yet at introducing characters rooted in classic Marvel horror tales. Blade, naturally, is a vampire-hunting anti-hero and Moon Knight has been known to slice the faces off his opponents. Though Marvel and Disney+ are all but guaranteed to not go full-Bushman, the tones of the properties should be more similar to one another than they are to the rest of the Marvel Cinematic Universe.

Then there’s the schedule, both for production and release. Moon Knight is expected to begin principal photography in the next month or so before Blade kicks off at some point later this year. In fact, it’s possible the Disney+ show wraps right in time for filming on Blade to officially kick-off. It’s been announced Moon Knight is set to hit Disney+ sometime in 2022, and there’s still an open October date next year that Marvel and Disney have yet to surrender.

Should Blade be a smaller project when compared to something like Thor: Love and Thunder or even Ant-Man and the Wasp: Quanumtania, that gives the House of Ideas plenty of time to shoot the Mahershala Ali-starring movie and have it ready for release just months after Moon Knight is introduced to the masses through Disney+.

As we’ve seen elsewhere, Marvel Studios is also tying their Disney+ shows into the films released in theaters. We know both WandaVision and Loki will tie in Doctor Strange in the Multiverse of Madness, and we know Ms. Marvel and Secret Invasion will likely both tie into Captain Marvel 2. We even know Armor Wars and Ironheart are gearing up for development right around the same time.

But then, let’s take a quick look at the cast involved — a spot where things get really speculative. We know both Oscar Isaac and Ethan Hawke are going to be in Moon Knight, but we only know that Mahershala Ali has been cast in Blade. Some early ideas of who Hawke could play include Werewolf by Night and Dracula, both characters that could make sense in a story featuring Blade as the title character.

Better yet, one filmmaker gaining some popularity with Marvel fans to lay claim to the director’s chair on Blade is The Equalizer helmer Antoine Fuqua. The director revealed he met with Marvel Studios about directing back in 2018 and, believe it or not, he’s a frequent collaborator with Hawke. Sure, it’s connecting imaginary dots — but it’s a scenario that seems increasingly possible the more you think of it.

Neither Moon Knight or Blade have yet to set a release date.

What other horror characters would you like to see pop up in the MCU at one point or another? Let us know your thoughts either in the comments section or by hitting our writer @AdamBarnhardt up on Twitter to chat all things MCU!