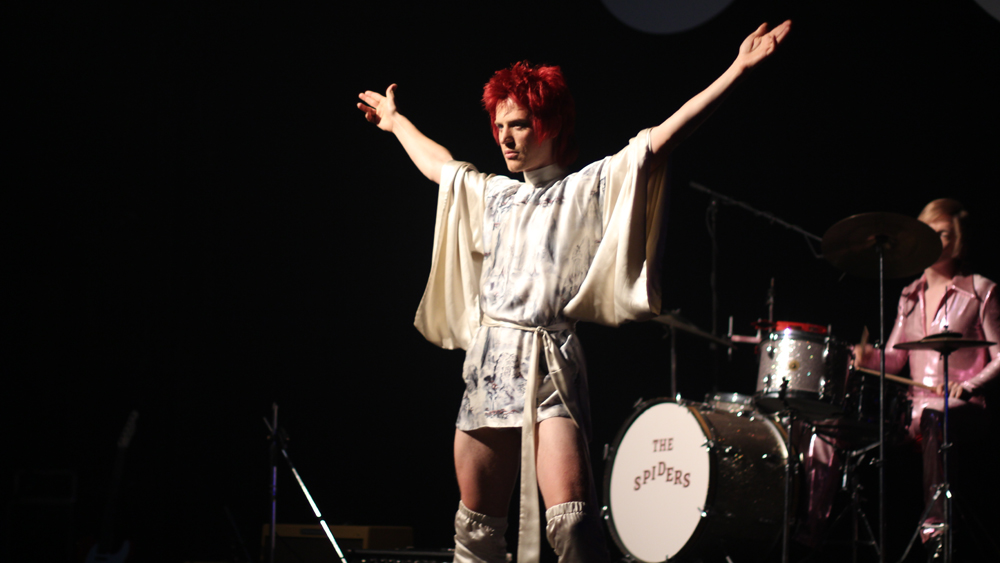 As we enter the long holiday weekend of Thanksgiving during an era where box offices are struggling and more weight is being on streamers, there are still titles making theatrical debuts while the digital film landscape has plenty to consume as people recover from their turkey-induced tryptophan haze. It all starts with three films spotlighting a trio of artists that made a significant impact on pop culture.

Written by Range and Christopher Bell, Stardust (not to be confused with the 2007 Matthew Vaughn fantasy pic) isn’t a full-blown, cradle to the grave biopic. Instead, it spotlights Bowie’s life at one significant moment in his career — before he became the icon he was destined to be. In 1971, 24-year-old David Bowie embarked on his first road trip to America with Mercury Records publicist Ron Oberman (Maron) only to find out the world wasn’t ready for him. The film offers a glimpse behind the curtain of the moments that inspired the creation of Bowie’s first and most memorable alter ego, Ziggy Stardust (hence the title), capturing the turning point that cemented his career as one of the world’s greatest cultural icons.

Stardust opens in select theaters and on demand on November 25. Watch the trailer below.

From the glam rock of Ziggy Stardust to the experimental music of Frank Zappa. Magnolia Pictures is set to debut the Alex Winter-directed docu Zappa in theaters and on-demand on November 27.

The docu, which made its world premiere virtually at the Camden International Film Festival in October and played at DOC NYC, gives audiences access to the Zappa family trust and all archival footage. Through this, Winter (an acclaimed filmmaker you may know from the Bill & Ted franchise) explores the private life behind the trailblazing and unconventional musical career of the titular subject who was influenced by the avant-garde and never shied away from the political turbulence of the time.

Watch the trailer below.

There is a chance that the poem “Do Not Go Gentle Into That Good Night” was part of your English curriculum at some point in your education. Whether you liked it or not, you have Dylan Thomas to thank — and he is the inspiration behind the feature film Last Call. K Street Pictures debuts the pic today in select theaters in Orange County and Los Angeles.

Written and directed by Steven Bernstein, Last Call stars Rhys Ifans as the influential Welsh Poet who was full of passion often raged, loved and fought against the gathering darkness. The poet also gave us “Under Milkwood” and stories such as A Child’s “Christmas in Wales” and “Portrait of the Artist as a Young Dog”. Last Call begins in New York City on Thomas’ final tour in 1953. This was the tour that was supposed to save him from ruin. He had a reputation for heavy drinking and philandering but that was all forgotten as audiences are captivated by his poetry lectures. One day at the local White Horse Tavern, he drank 18 double scotches and named each one after his life experience. Soon his fantasies, memories, and an uncertain present blend into a wild, surreal farewell to the world.

From a joyous LGBTQ holiday rom-com to American life through the eyes of an Appalachian family to war drama to an AI comedy, the streaming space offers a good mix for your at-home Thanksgiving entertainment.

Clea DuVall steps behind the camera for Happiest Season, the perfect holiday movie to kick off the season. Taking the traditional elements of a Christmas movie, the Hulu pic modernizes the story with some queer charm and love. When Abby (Kristen Stewart) is asked by her girlfriend Harper (Mackenzie Davis) to come home with her for the holidays to meet her family. Abby sees this as a big move in their relationship and she tells her BFF John (Dan Levy) that she plans to propose during her family’s annual Christmas dinner.

All is well until Harper admits to Abby on the way to her parents’ house that she has kept their relationship a secret from her family. Instead, Harper has told Abby that she is her orphaned roommate. Abby takes one for the team, but being shoved back in the closet makes her question the girlfriend she thought she knew.

Happiest Season was set for a November 25 theatrical release — that was the before times. Hulu acquired the U.S. rights to the rom-com from Sony Pictures so that they could give it as a gift to the masses via the streaming platform.

The movie was written by DuVall and Mary Holland, who also stars in the movie as Harper’s free-spirited, off-center sister. It also features a delightful ensemble of Alison Brie, Aubrey Plaza, Burl Moseley, Victor Garber and Mary Steenburgen.

Ron Howard’s adaptation J.D. Vance’s memoir Hillbilly Elegy has awards season written all over it. The film is based on a best-selling book, has Howard as the director and features high-profile actors Glenn Close and Amy Adams in roles that require a “makeunder” (Hollywood loves that kind of stuff). All are ingredients for Oscar bait.

Written for the screen by Vanessa Taylor, the story follows the aforementioned J.D. Vance (Gabriel Basso), a former Marine from southern Ohio and current Yale Law student. He is on the verge of landing his dream job when a family crisis forces him to return to the home he’s tried to forget.

Upon returning, J.D. must navigate the complex dynamics of his Appalachian family, including his volatile relationship with his mother Bev (Adams), who’s struggling with addiction. Fueled by memories of his grandmother Mamaw (Close), the resilient and whip-smart woman who raised him, J.D. comes to embrace his family’s indelible imprint on his own personal journey.

In his review of the film, Deadline’s Pete Hammond said, “The polemics of the book are there but weaved in much less blatantly as Howard’s take does what all the best movies do: focusing first and foremost on the humanity of the characters, flaws and all. The director, who has dealt only a few times with family themes before, really has a handle on how to get inside this one.”

He added, “Fans of the book, as well as those who have not read it, will see a film that cuts right to the heart of what makes family such an integral and inescapable part of our lives. This movie, while very much about Vance, will likely strike a chord well beyond his personal story.”

Hillbilly Elegy was released in select theaters and is currently streaming on Netflix.

The feature was inspired by Luke Mogelson’s 2017 piece for The New Yorker, “The Desperate Battle to Destroy ISIS”. Carnahan wrote the film which is based on the true events of the elite Nineveh SWAT team, a renegade police unit who waged a guerrilla operation against ISIS in a desperate struggle to save their home city of Mosul.

After inexperienced Iraqi cop Kawa (Adam Bessa) is rescued from a harrowing firefight by the Nineveh SWAT team, he’s quickly inducted into the rogue squadron, a band of ten brothers-in-arms led by the wise Major Jasem (Suhail Dabbach). Under constant threat of attack, the unit embarks on a dangerous guerrilla operation, determined to wipe out an enemy base and restore order to the lawless territory.

The film was produced by Anthony and Joe Russo under AGBO and premiered at the Venice Film Festival last year before heading to TIFF. It was initially acquired by 101 Studios for a theatrical release, but like with many titles, they had to pivot. Netflix ended up acquiring the film and now it will stream this week.

In the AI comedy Superintelligence, Melissa McCarthy stars as Carol Peters, a very basic woman with a basic life — and all that will determine the fate of the world. When she comes across an all-powerful Superintelligence that takes the form and voice of James Corden, she becomes its case study as the most average person on Earth.

At first, she freaks out (as anyone would) but it doesn’t take her long to use Superintelligence to help better her life as she reveals what’s happening to her best friend Dennis (Brian Tyree Henry) and reconnects with an old flame George (Bobby Cannavale).

Directed by McCarthy’s real-life husband Ben Falcone (who appears in the film) and written by Steve Mallory, Superintelligence was originally slated for a December 20 theatrical release date but that changed because of — yes, you guessed it — the pandemic.

“We made the film for New Line and Warner Bros, and there are different challenges in the way people watch films, how and where they see them on different platforms,” Melissa McCarthy told Mike Fleming Jr. in a Deadline interview. “We were all geared up to open theatrically, and Ben was the one who said, this would be better for HBO Max. What a way to reach a massive amount of people, and to be put in pretty amazing company. It seemed like a win-win.”

She continued, “We have two young kids, and we thought about how we watch movies. Superintelligence is PG, and we thought about how we watch these movies with our kids. We still go to the theater, and we love going to the theater. I would cry if that ever went away. But we watch a lot of movies at home, and a lot of people do. This just seemed like an exciting new way to get it in front of a lot of people.”

Superintelligence is set to make its streaming debut on HBO Max on November 26.