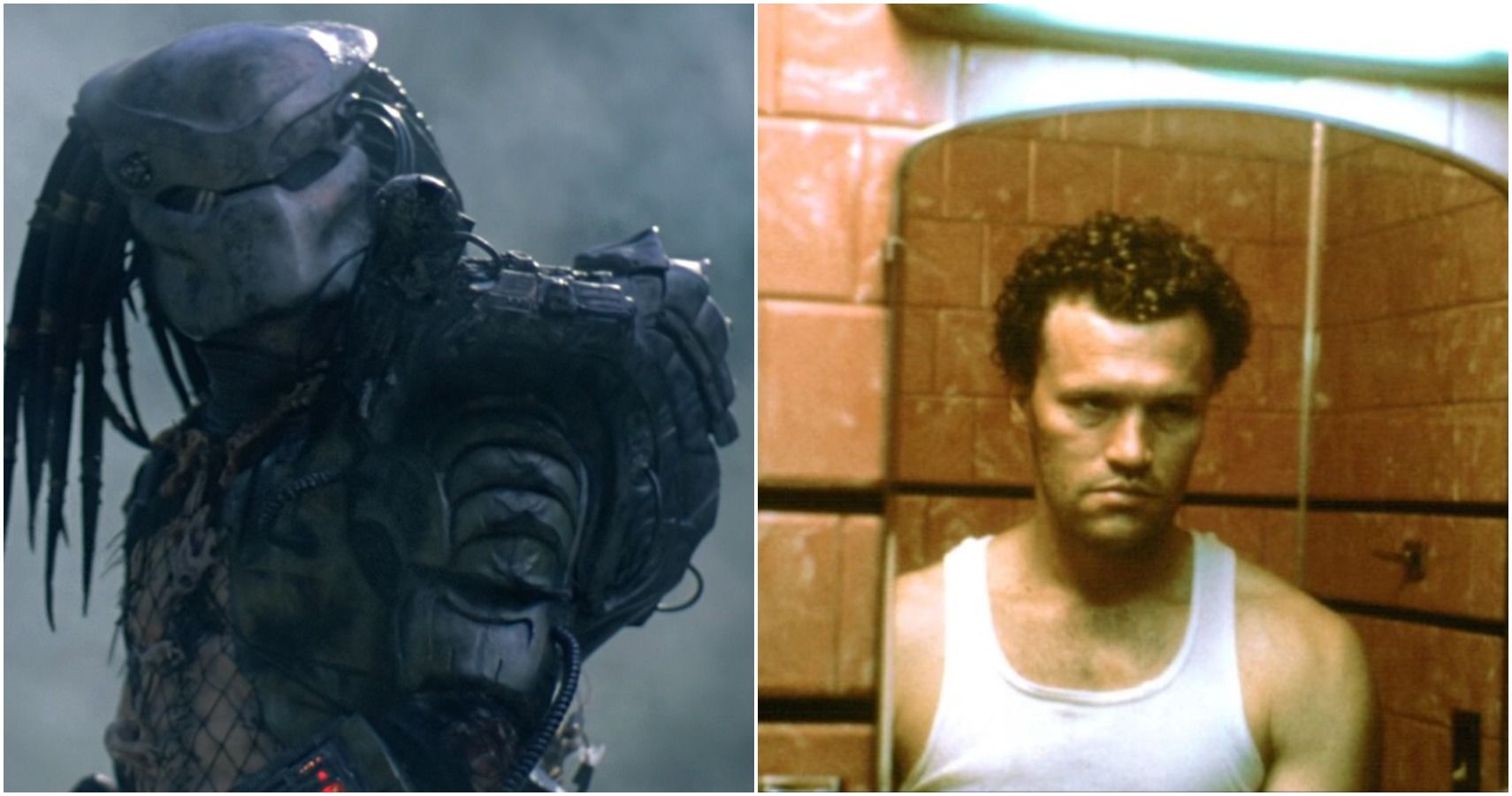 There are few things more effective in a movie than a good villain. While we cheer for the heroes, we are always fascinated by the bad guys, especially the ones who truly terrify us. The 1980s was a decade that saw huge changes in film genres like action, horror, and sci-fi. This allowed for a lot of noteworthy villains to emerge.

RELATED: 10 Horror Movie Villains & The Real-Life Monsters Who Inspired Them

Some villains from this era have failed to maintain a legacy. They might have initially appeared intimidating, but they’re now laughable from a modern perspective. Other villain characters may have become more sympathetic over time and it’s hard to see them as villains anymore. Then there are those classic villains from the ’80s that still inspire fear all these years later. We’ve added a few more to the list that are sure to shake your bones.

Updated on November 23rd, 2020 by Derek Draven: There’s always room for a few more frightening villains on this list, so we’ve added several that were prominent figures in 1980s movies. Each still sending chills down the spines of audience members across the globe even today.

This haunting animated classic has enough creepiness to go for miles, but it’s still a hallmark of great storytelling and excellent characters. One, in particular, managed to give millions of children around the globe nightmares that would resonate well into their adult lives–the Harpy.

This reimagining of the monster from Greek mythology was far different than the classic interpretation with a predatory vulture-like appearance, menacing eyes, and a horrifying shriek. The scene where she breaks free from her cage and attacks a traveling caravan is chilling, still to this day.

James Earl Jones played the wicked antagonist Thulsa Doom in the 1982 adaptation of Robert E. Howard’s iconic hero, and it was a performance for the ages. Jones channeled the best of his Darth Vader performance and married it to a more charismatic physical villain who enticed and seduced as much as he murdered.

Not only was Doom an incredibly persuasive cult leader, but he could also transform himself into a gigantic snake. His knowledge of the black arts and his ability to order his devout followers to death with the faintest whisper made him one of the scariest villains of the decade.

Long before he joined the cast of the hilarious That 70s Show, actor Kurtwood Smith was best known to audiences as the irredeemable Clarence Boddicker, a vicious and psychotic criminal prowling the streets of Detroit. He was the man responsible for the murder of Alex Murphy and the eventual rise of the RoboCop program.

Boddicker spent the movie engaged in nothing but offensive criminal behavior, but he got his just desserts in the final act of the film when RoboCop stabbed him in the neck with his data spike, rupturing an artery in the process. It put an end to his frightening criminal career.

James Hong portrayed the frightening sorcerer Lo Pan in this cult action/comedy classic starring Kurt Russell. Lo Pan would send any child (and most adults) screaming from his presence thanks to his ghostly appearance and supremely evil demeanor.

His first appearances are creepy beyond comparison as he summons sorcery that causes light to pour from his mouth. His feeble old man form is just as creepy thanks to layers of 80s special effects makeup. Lo Pan would serve as a direct influence on the character of Shang Tsung from the Mortal Kombat video game series.

Jim Henson’s puppet classic The Dark Crystal shouldn’t be viewed by any child under the age of 8, and even that is being generous. The Skeksis serve as the principal villains of the film, and they all serve up a heavy dose of nightmare fuel all on their own. One in particular stands above the rest.

That would be the Chamberlain known as SkekSil, a conniving, manipulative, and evil villain who uses sweet words to hide his true malevolent intentions. He spends most of the film stalking the protagonists from the cover of darkness, which makes his multiple reveals that much scarier.

Brian De Palma’s crime epic The Untouchables takes a look at the fight against organized crime during America’s Prohibition era. Though this movie certainly didn’t introduce the infamous figure of Al Capone to the world, it did provide what is likely the most iconic depiction of the real-life gangster.

The performance by Robert De Niro is a big part of what makes the character so memorable as De Niro plays him with a seductive charm which can turn into a violent rage on a dime. The scene in which Capone beats one of his own men to death with a baseball bat is an unforgettable moment of brutality.

While John McClane became an action movie icon thanks to Die Hard, the more you watch the classic movie, it becomes clearer that the villain Hans Gruber steals the show. Played to perfection by Alan Rickman, Hans Gruber helped usher in a new era of action movie villains.

RELATED: 10 Things That Make No Sense About The Die Hard Franchise

Gruber is a sophisticated bad guy who has a plan and is smarter than the hero. While you might think his calm demeanor would put you at ease, it does the opposite as he could kill someone in cold blood and not even break a sweat.

American audiences first came to know the hero Max Rockatansky in The Road Warrior. The follow-up to Mad Max found the lone highwayman in the post-apocalyptic wasteland where he must do battle with evil warlord ‘the Humungus’. However, it is Humungus’ henchman, Wez, who is really the most intimidating threat.

Wez is a mohawk-sporting madman who seems more like a wild animal than a human. He attacks his enemies with such crazed ferocity that they can’t help but cower in fear at the mere sight of him.

Ridley Scott’s sci-fi masterpiece Blade Runner is set in a world in which android replicants are used for hard labor. Roy Batty is a replicant who leads a rebellion against the human masters and is then hunted.

Batty is a rare kind of villain as he is completely sympathetic in his journey and what he wants to achieve, yet he is still terrifying. His chilling persona, performed exquisitely by Rutger Hauer, makes him seem extremely human yet also eerily detached.

It takes a pretty impressive movie monster to make Arnold Schwarzenegger look scared. Predator is a thrilling action-adventure in which Schwarzenegger leads a team of special forces into the jungle where they are stalked by an alien who hunts for sport.

The creature design of the Predator is really what sells this as an instantly iconic movie monster. His cool armor and weaponry mixed with his ability to camouflage make him a formidable foe. But when he removes his helmet, his face is the stuff of nightmares.

Though Stand by Me is a Stephen King adaptation, it is a much less terrifying story than what the author usually delivers. But even with a coming-of-age story of four friends on a summer adventure, the movie still delivers a really chilling villain.

Kiefer Sutherland plays Ace Merrill, the local teen psychopath who seems to get his kicks by threatening other people. Even Ace’s friends are terrified of him. And when he meets up with the young heroes of the story, it feels like he is really willing to kill them.

Though the Hellraiser series might not be as iconic as some other horror franchises, like Halloween or Nightmare on Elm Street, the villain at the center is one of the most effective and unsettling bad guys ever created.

Though he is credited as Lead Cenobite in the first film, the character has become known as Pinhead, thanks to the nails sticking out of his head. His booming voice and relentless nature add to the horrific nature of the character. And the fact that he tortures his victims for all eternity is certainly intimidating.

The depiction of serial killers in movies was nothing new, but Henry: Portrait of a Serial Killer made the killer the main character. Audiences were forced to follow this deranged man around on his killing spree where he continued to claim many innocent victims.

Michael Rooker gives a chilling performance in the lead role. The rage and cold-blooded nature of Henry’s crimes made it a haunting movie and truly disturbing to experience.

Many young movie fans were thrilled by seeing the animated and live-action worlds mix together in Who Framed Roger Rabbit. Those same young fans were also probably terrified by the film’s villain, Judge Doom.

Christopher Lloyd, usually such a lovable actor, brings real menace to this man who wants to destroy “toons.” But as scary as he is at first, it’s the twist that he is a toon himself that really makes him a terrifying and unforgettable bad guy.

Stanley Kubrick’s The Shining is perhaps the most famous Stephen King adaptation that the author doesn’t like. It centers on Jack Torrance, a washed-up writer who takes a job as a winter caretaker of an isolated hotel. While secluded with his family, Jack gradually grows more unhinged and dangerous.

Jack Nicholson fully embraces Jack’s deranged downward spiral. Seeing this family man turn into a cold-blooded murderer is upsetting and horrific. When he starts going after his wife and child, he becomes a force of nature that is impossible to forget.

NEXT: Top 10 Villain Performances From Actors Who Usually Play Heroes

Next
Resident Evil: 10 Things You Didn’t Know About Alice

A writer and film fan. I always enjoy keeping up with the latest films in theaters as well as discovering some hidden gems I may have overlooked. Glad to be a part of Screen Rant’s positive and fun community and have the opportunity to share my thoughts with you.