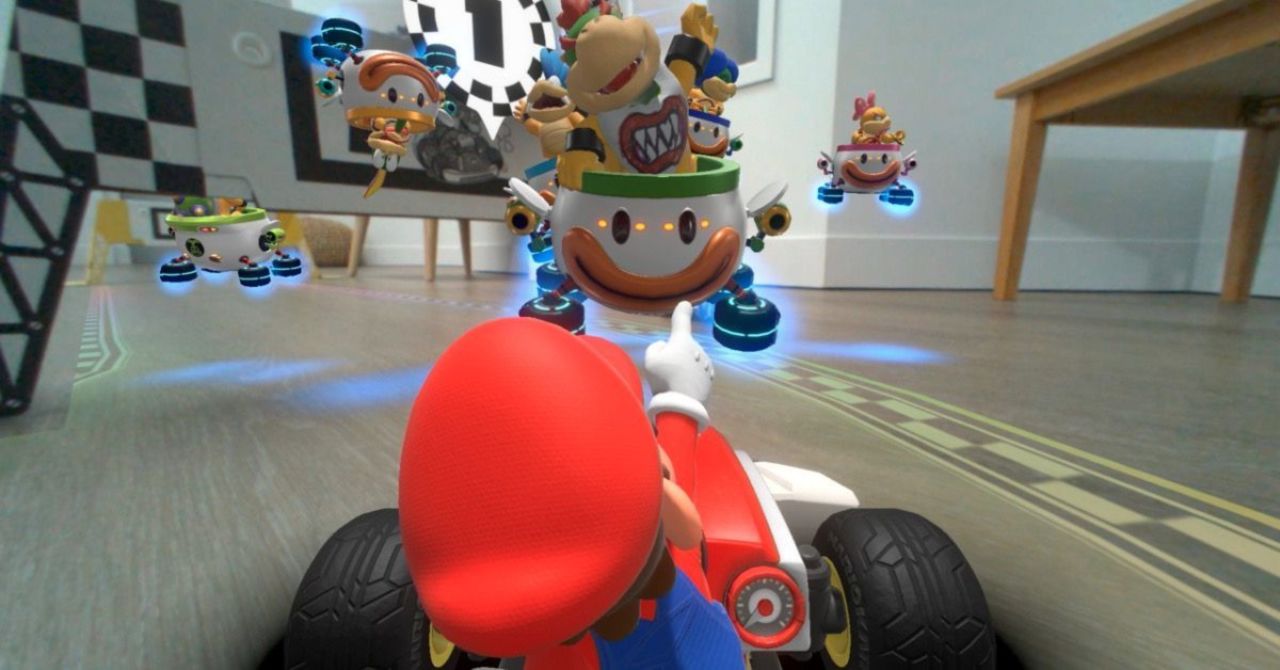 When it comes to innovation in the video game industry, Nintendo truly stands in a league of its own. The company has long been known for thinking outside the box, and Mario Kart Live: Home Circuit for Nintendo Switch is just the latest example. Unlike previous entries in the Mario Kart series, Home Circuit tasks players with building actual courses inside their home or apartment, and then racing through them with a toy Mario Kart equipped with a camera. It’s a strange concept, but it also gives Home Circuit the kind of hook that will make onlookers beg to try it out for themselves.

Developed by Velan Studios, Maro Kart Live: Home Circuit essentially marries the concept of Super Mario Maker with Mario Kart, with a little Nintendo Labo for good measure. Inside the Home Circuit kit, players will find a set of four cardboard gates, that are very similar in durability to Labo sets. When starting up the software (which is a free game that players must download from the eShop), Lakitu will prompt the player to set up the gates. Once this step has been completed, players steer the Kart through the gates to set-up how the track is meant to be played. During this process, players will see what the Kart sees through the Nintendo Switch. The whole process takes just a few minutes to set up, depending on how big the course is. After this step is complete, players can choose to race against the computer, or against up to four other players with their own Karts and Switch consoles.

While other Mario Kart games allow players to unlock additional drivers, this wouldn’t make a lot of sense for Home Circuit. The kit comes in two variations, one with Mario, the other with Luigi. As a result, players instead acquire coins during races which automatically unlock various costumes, vehicle skins, and horns. It might not be as exciting as unlocking characters like Rosalina or Dry Bones, but it’s fun to dress Mario and Luigi up like pirates, construction workers, or even Santa. Beating different cups will also unlock in-game environments that can then be added to the custom tracks, as well as radio stations that players can listen to while racing.

What’s really amazing about Home Circuit is the fact that it feels like a true Mario Kart experience, despite the game’s gimmick. In fact, at times, it’s easy to get so distracted that you forget there’s an R/C car moving around the house. That’s because the game itself feels true to the series, and it controls very much like it does in Mario Kart 8 Deluxe. Power-ups remain mostly the same, though there are some exclusions and minor adjustments; for example, a Spiny Shell will simply make the Kart stop, as opposed to the dramatic reaction that occurs in other Mario Kart games. Players do get to see the Kart physically speed up when a Mushroom is used, though, which is quite neat. During my time with the game, I did run into the occasional bit of slowdown, but the experience was mostly smooth.

The biggest potential issue for those interested in Home Circuit is the amount of space required to play. This shouldn’t be a major problem for most domiciles on the 50 CC setting. The physical Kart goes at a modest clip, and it’s responsive and easy to handle. With a little bit of effort, most players should be able to make something work. Helping matters, the Kart moves just as easily on hardwood surfaces as it does on carpet, even when switching between them during the same race. That said, thicker rugs, like the shag rug in my family room, did not work as well. When the Kart reached that area of the room, it came to a complete stop.

Unfortunately, those looking to spend time in the game’s faster settings will find that significant space is required. On 200 CC, the Kart moves at an insane speed, zipping around the room in a hilarious fashion. When playing a regular Mario Kart game on the higher settings, players get used to occasionally ramming into objects on the track. This is a little more problematic in a game where a physical Kart is actually slamming into things around the house (including those cardboard gates). The Kart and gates seem very durable, but players might want to secure any potentially breakable items around the room before playing on the faster settings.

Those space issues cannot be avoided by taking the Kart outside. The game should technically work outdoors without too much difficulty, but Nintendo issues a warning on the start-up screen that the game is for indoor use only. The company has not gone into detail about why that is, but it’s not hard to figure out. Despite the Kart’s durability, the wheels are made of a fairly thin rubber. Indoors, they should hold up without any issues. Exposure to stones or glass, however, could make short work of them. The cardboard nature of the gates might also be a factor, as those certainly won’t hold up well in inclement weather.

Mario Kart Live: Home Circuit is the most unique take on the series that since Mario Kart: Double Dash!! on GameCube. It’s a blast to play, and it feels reminiscent of games like Wii Sports, where players will immediately want to show it off to family and friends. It’s also a game that will really benefit those that have a lot of creativity and space. Home Circuit can still be enjoyed without a large setup, but players that want to really push the Kart and its software to its limits will want to give themselves plenty of room to do so. Mario Kart Live: Home Circuit doesn’t offer quite the same depth as options like Mario Kart 8 Deluxe, but it doesn’t really have to. Players will get out of the game what they put into it, and it will be exciting to see the tracks people come up with when the game has been out a bit longer. Nintendo’s latest offering is just another example of the company’s penchant for offering experiences that gamers of all ages can bond over.

Mario Kart Live: Home Circuit is now available on Nintendo Switch. The game’s Mario Set was provided by the publisher for the purpose of this review, and it was reviewed on a base model Nintendo Switch.