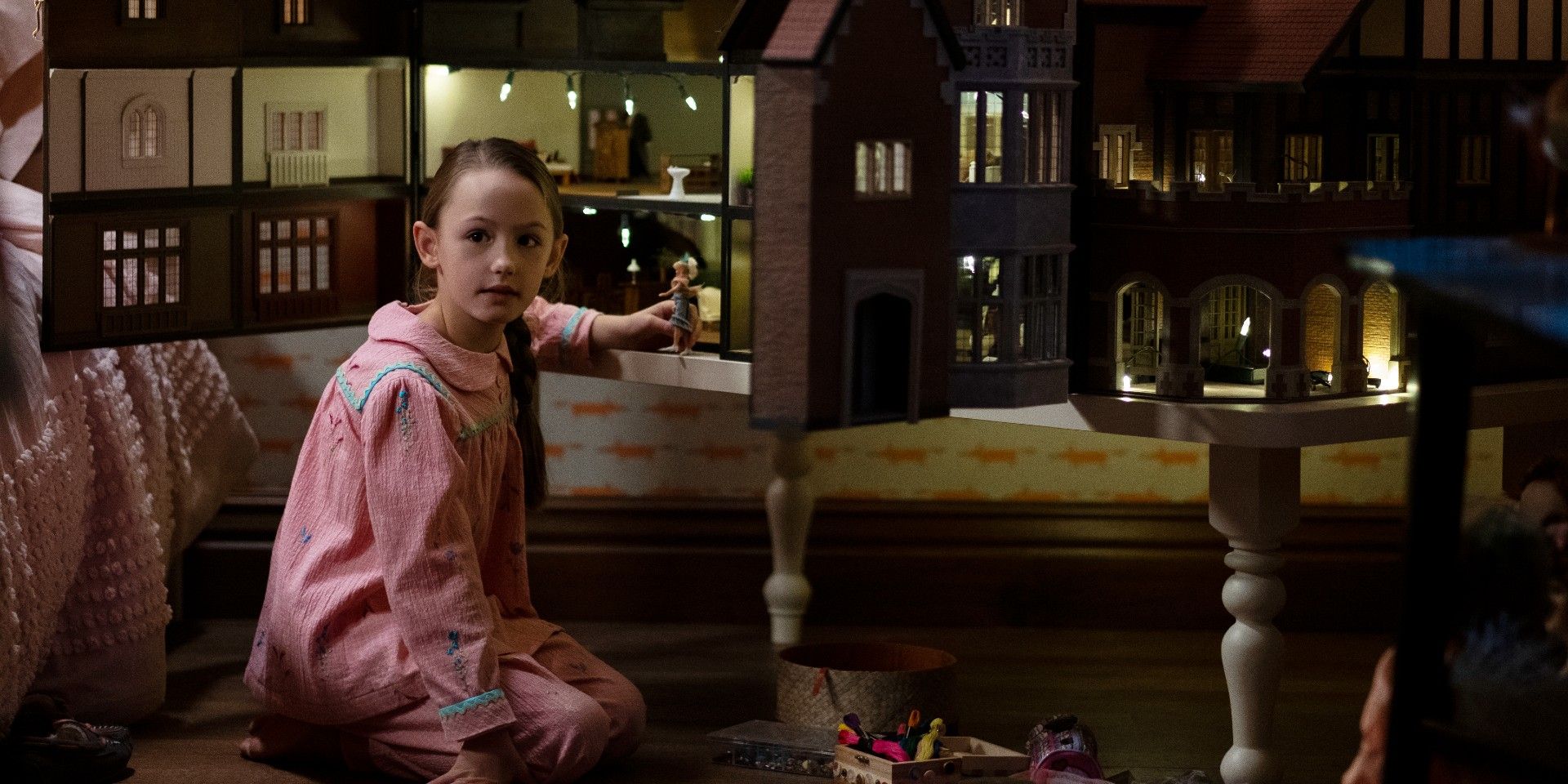 Netflix recently released a side by side comparison of all 14 of Flora’s dolls in The Haunting of Bly Manor and the ghosts and characters that they were inspired by. The Haunting of Bly Manor was released on October 9, 2020, and has been terrifying Netflix users all over the world ever since. Bly Manor is the second part in Mike Flanagan’s horror anthology series The Haunting, and follows the story of Dani (Victoria Pedretti), a young American who takes on a job as an au-pair for Flora (Amelia Bea Smith) and Miles (Benjamin Evan Ainsworth), two siblings that reside in the Bly Manor. Like its predecessor Hill House, Bly Manor features unsuspecting jump scares, a large, foreboding house, and surprise reappearances of a few familiar faces.

Though Bly Manor is not related in plot to Hill House, it is just as scary and also gives fans clues that lead up to its big reveal. One object that serves a greater purpose in Bly Manor is Flora’s dollhouse, which is filled with dolls that represent the characters and ghosts stuck within the walls of the manor. The dolls are moved around by the ghost of a little boy, who indicates where all the spirits are roaming on each night so that Flora and Miles can stay safe.

Related: Bly Manor: How Flora’s Dolls Were Being Moved Inside The Dollhouse

It’s hard to tell exactly which doll is which character when watching the show, but thankfully, Netflix recently tweeted a photo comparing all 14 of Flora’s dolls and their inspirations. The picture shows the obvious figurines of Dani, Miss Jessel, and Peter Quint, and the more obscure ones of the plague doctor and the vicar ghosts. Take a look at Netflix’s post below:

The revelation of all of Flora’s dolls and who they represent is sure to surprise some viewers, as ghosts like the soldier are almost unnoticeable in the show if viewers didn’t pay attention to every single detail. Fans can also notice that the ghost of Peter Quint is watching over Miles in the image, signifying that both Quint and Miss Jessel are able to possess and control the two children.

The dolls of The Haunting of Bly Manor juxtaposes childhood innocence with the eerie secrets hidden within the manor. Not only does the show put an emphasis on its love stories, it also tells a meaningful tale of chosen families and the lengths that characters would go to save each other, all of which can be seen through Flora’s protectiveness of her dolls. Although Flora no longer remembers her encounters with spirits, just like how most girls grow out of their dolls as they age, Flora’s childhood dedication allowed the characters of The Haunting of Bly Manor to stay alive and look after one another for as long as possible.

More: The Biggest Unanswered Questions After The Haunting of Bly Manor

Annie Yin is a third year student at Tufts University studying Film and Media Studies and International Relations, currently on a gap semester and writing for Screen Rant. She has previously worked at China Central Television (CCTV), Hifu Services Communications, and SECA Worldwide Sports Media as a Journalist. Annie has lived in Boston, Singapore, Shanghai, and Beijing, and loves writing, traveling, watching movies and binging TV shows, and taking walks with her French bulldog Louie. You can find her on Instagram @annieyin_.