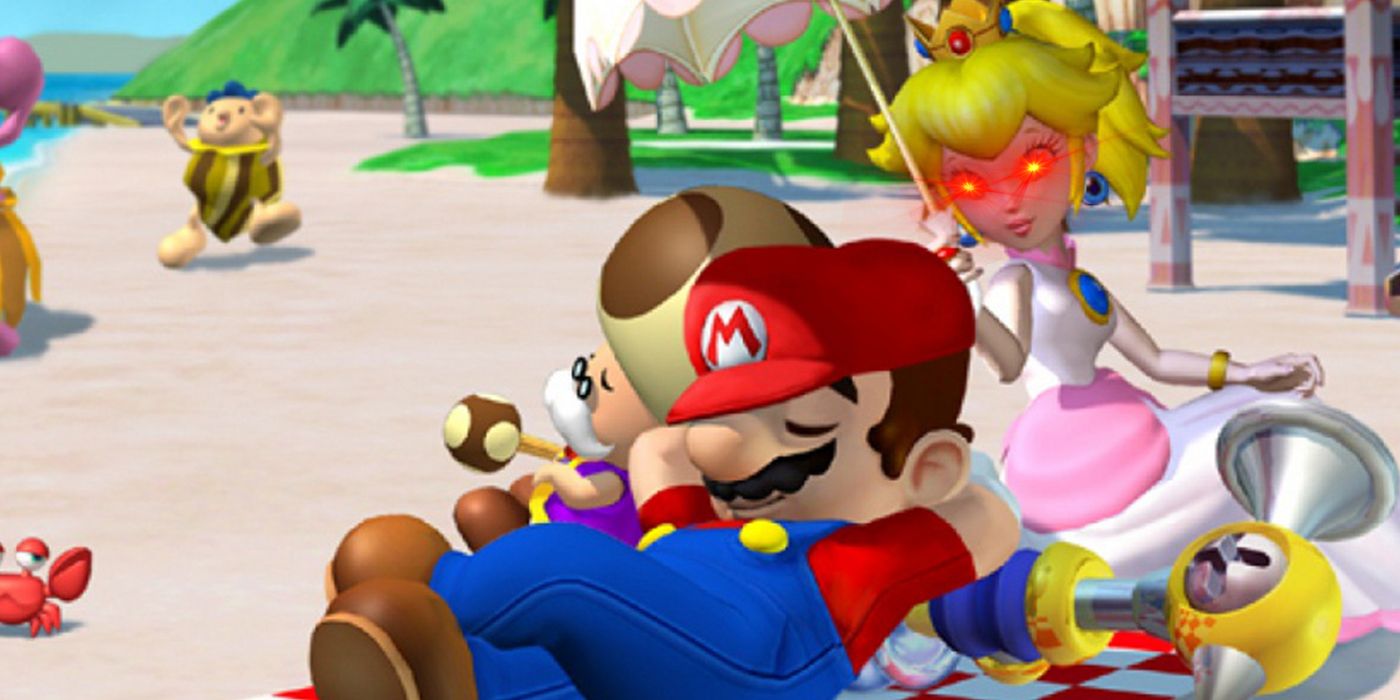 The pre-rendered cutscenes in Super Mario Sunshine received a slight upscale as a part of the Super Mario 3D All-Stars collection, but the higher quality images reveal a rather disturbing discovery. The upcoming collection is giving a similar visual update to all of the classic 3D Mario games it includes.

A YouTuber by the name of Akfamilyhome posted the disturbing image on Twitter that was found inside the Super Mario 3D All-Stars leaks. Akfamilyhome discovered that the pre-rendered cutscenes in Super Mario Sunshine were the same cutscenes from the original game, but the files were higher quality than the originals. He also included an image from one of the cutscenes in Super Mario Sunshine which shows Princess Peach wearing earrings that use the same texture as her eyes. Essentially, Princess Peach has her own eyes dangling from her ears, and now the scene can be relived in horrifying high definition.

Apparently the Sunshine rerelease will use the same cutscenes but with the higher quality raw files, so I guess we can finally see Peach’s eye texture earrings in HD pic.twitter.com/KMisxDlO8P

This specific scene appears at the very beginning of Super Mario Sunshine, right after Mario, Toadsworth, and Princess Peach exit their private plane. While Mario and Toadsworth are discussing the sorry state of the runway, the now nightmarish Princess Peach approaches the gentlemen from behind donning her second set of eyes. In the next scene, Peach seemingly snaps back to her sweet self, and the grotesque eye-rings are never to be seen again. It still remains unknown as to why Peach’s earrings reuse her eye textures in this singular scene, but now players can get a clearer look thanks to Super Mario Sunshine’s HD facelift – though they may wish they hadn’t.

There have been concerns over whether or not Nintendo will make certain changes to the games in the collection. Players thought that an infamous voice clip could have been replaced in Super Mario 64, and others were concerned as to how Super Mario Galaxy would control without a Wii Remote. However, Peach’s replacing eyeball earrings would have been one change fans probably would have preferred. Luckily, this instance of unexpected body horror only appears once in Super Mario Sunshine and then never again.

Next: Super Mario 3D All-Stars Menu Is So Lazily Designed Anyone Can Do It

Everything We Know About The Next Avatar After Korra
Related Topics

Achievement Unlocked! You’ve found Zackerie Fairfax’s hidden bio. Zack is a staff writer for Screen Rant covering a number of topics ranging from the latest streamer scandal to how many gigaflops are in an Xbox. When not writing about video games, he is playing them. Primarily niche 3D platformers/adventure games that only he thinks should be ported to every next-gen console for the rest of eternity.

Life is Strange Devs Provide Update on Series After Revealing That They’ve Moved on to a New IP
This Week on Xbox: September 25, 2020
COD: Warzone & Modern Warfare Season 6 Adds 2 New Operators Next Week
Become the star of the show when Balan Wonderworld releases in March 2021
Book Riot’s Deals of the Day for September 27, 2020