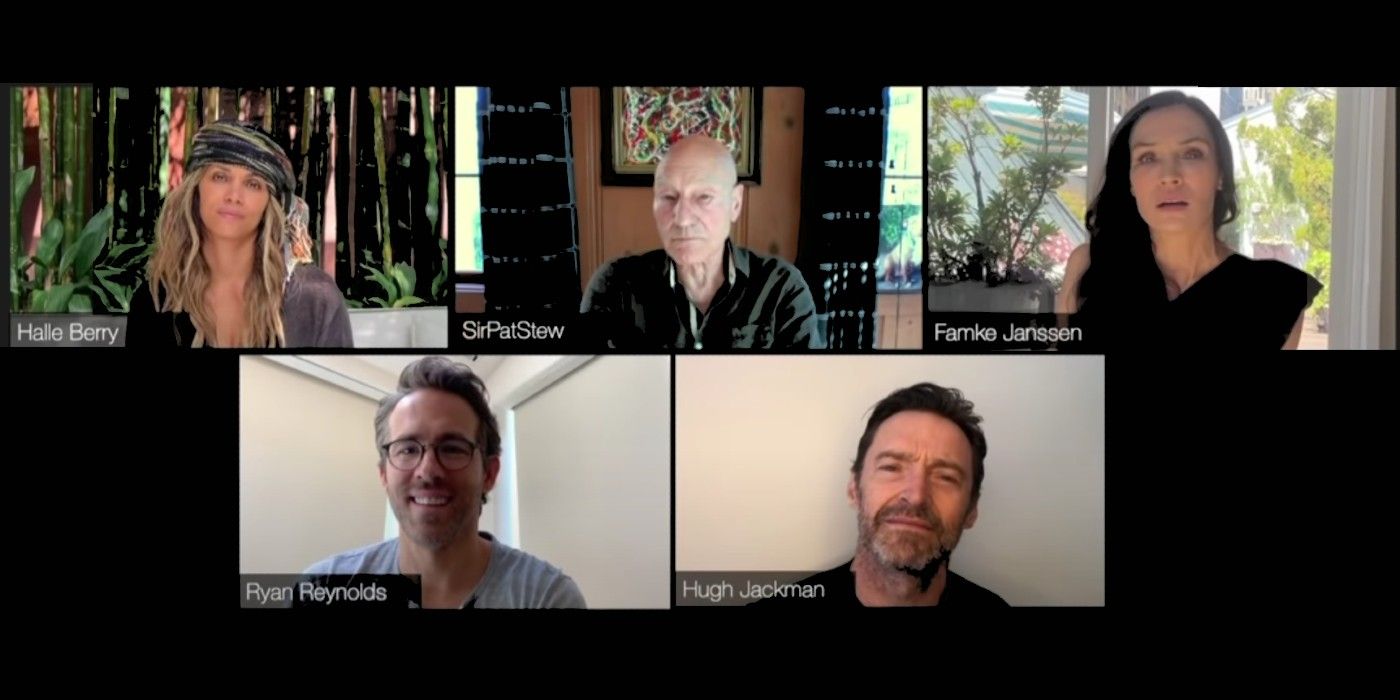 Hugh Jackman’s reunion with the rest of his original X-Men movie co-stars is hilariously hijacked by Ryan Reynolds. The pair’s prank war prominently started several years ago at the height of Reynolds’ debut as Deadpool, with fans hoping that the Australian actor will reprise his role as the fan-favorite mutant in the Marvel/Fox film. That didn’t happen even until Jackman’s retirement, but the X-Men Origins: Wolverine actors continue their good-natured banter, even amid the coronavirus pandemic with a funny virtual encounter.

Over the years, Reynolds and Jackman have found many ways to troll each other. One of their recurring gag topics, however, is the critically-panned first solo Wolverine film which initially debuted Deadpool. The Merc-With-A-Mouth’s first big-screen adaptation was bad, but thankfully the actor was given another crack at bringing him to life in 2016’s sleeper comic book hit, Deadpool. The following year, Jackman officially hung up his Adamantium claws via the acclaimed Logan, retiring the role without making the dream of a Wolverine cameo in a Deadpool movie come true. Despite this, the pair has continued making fun of each other – the latest instance even features some of the most notable stars of the X-Men movie franchise.

Related: What The MCU’s X-Men Team SHOULD Be (Not Repeating First Class)

In celebration of the 20th anniversary of the original X-Men film, Jackman gathered his co-stars Sir Patrick Stewart (Professor X), Halle Berry (Storm), and Famke Janssen (Jean Grey) for a virtual reunion when Reynolds suddenly popped in. Jackman tried to explain that the video call is only for the cast of the 2000 film when suddenly James McAvoy (Professor X) and Sophie Turner (Jean Grey) also appear, both from soft reboot/prequel timeline. What ensues is fun chaos with Jackman visibly stressed out. Check the full video below from Global Citizen.

One by one, the stars leave with the actors explaining that some other high-profile franchise they’re a member of are is also hosting some sort of virtual reunion until it’s only Reynolds and Jackman. Suddenly, Liev Schreiber (Sabretooth) joins them essentially making it an X-Men: Origins: Wolverine get-together. There are several funny moments throughout the clip, but perhaps the best zinger comes from Reynolds cracking on how the X-Men movies different timelines don’t really matter. This now includes Marvel Studios regaining the rights to the mutants and their tie-in characters thanks to Disney/Fox deal. MCU architect Kevin Feige has been mum about how the MCU is going to incorporate the X-Men and even the Fantastic Four as well as Deadpool, but they’re coming sooner or later.

While it was fun seeing Reynolds’ surprise cameo, it would be nice if the stars of the original X-Men movie could actually have a reunion. Just like most of them echoed in the video, it’s amazing to think that it’s been two decades since the movie first hit theaters, and regardless of the confusing timeline and botched installments, the 2000 blockbuster is important for how it changed the game for comic book movies. It’s only fitting that X-Men be recognized for its contribution to the current state of the superhero movies.

More: Eternals Can Be A Better Dark Phoenix Adaptation Than X-Men’s Two Movies

Accidental geek who is perpetually curious, Ana rekindled her love for writing several years back and married it with everything pop culture. The result is a passionate young writer who could ramble (and of course, pen) about films and series multiple hours a day. She has a soft spot for The Lion King, old songs, and home design; is currently obsessed with old sitcoms (The Golden Girls!); and won’t dare watch any horror films although she’s (ironically) dying to see one. Though a bit late to the party and was an actual Force non-believer, she now finds the Star Wars franchise quite fascinating (fun fact: it was a crazy Jar Jar Binks/Sith theory that drew her in).