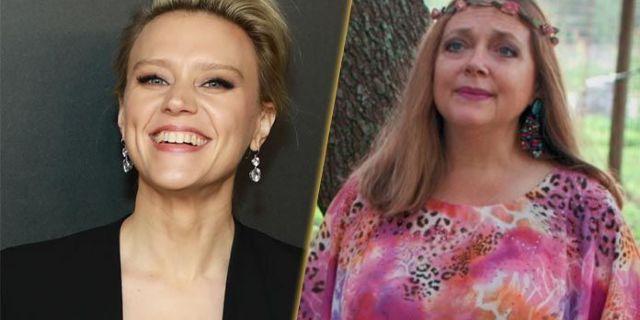 Netflix’s true crime docuseries Tiger King: Murder, Mayhem, and Madness is everyone’s newest streaming obsession and if the seven-episode series that dropped on the streaming platform on March 20th isn’t enough, don’t worry. There’s more about the bonkers world of Joe Exotic in the works. Saturday Night Live star Kate McKinnon is still set to star in and executive produce a limited series based on Joe Exotic, a Wondery podcast about the big cat enthusiast and his very colorful life.

As was announced last fall (via Variety), McKinnon is signed on for the adaptation of the Joe Exotic podcast. The adaptation is being developed at Universal Content Productions, though there is currently no network or streaming service attached which means that there’s not much information as to when or where the series could premiere. In the Joe Exotic adaptation, McKinnon is set to play Carole Baskin, the CEO of Big Cat Rescue who, as fans of Netflix‘s Tiger King know, just so happens to be Joe Exotic’s nemesis. The series will center on Baskin’s feud with Joe. At this time, no one has been named as being cast as Joe Exotic.

While fans of the Netflix series are no doubt excited about a limited series based on the larger-than-life story, not everyone is entirely sold on the idea that the Tiger King story is one that would make for good television. That includes filmmaker Kevin Smith who recently took to social media to suggest that nothing could be quite as compelling as the real story as presented in the Netflix series.

“I would never discourage any artist, but it’s going to be hard to dramatize #TigerKing in a movie and have it be as compelling as the real life story I watched,” Smith wrote. “Binge all 7 riveting episodes on @netflix when you can. It’s easily one of the best documentary series I’ve ever seen.”

You can read the official description of Netflix’s Tiger King below.

“Among the eccentrics and cult personalities in the stranger-than-fiction world of big cat owners, few stand out more than Joe Exotic, a mulleted, gun-toting polygamist and country-western singer who presides over an Oklahoma roadside zoo. Charismatic but misguided, Joe and an unbelievable cast of characters including drug kingpins, conmen, and cult leaders all share a passion for big cats, and the status and attention their dangerous menageries garner. But things take a dark turn when Carole Baskin, an animal activist and owner of a big cat sanctuary, threatens to put them out of business, stoking a rivalry that eventually leads to Joe’s arrest for a murder-for-hire plot, and reveals a twisted tale where the only thing more dangerous than a big cat is its owner.”

Did you know ComicBook.com has a podcast? That’s right folks, ComicBook Nation is available every Wednesday and Friday bringing you the best breakdowns of the week’s biggest news from Kofi Outlaw, Matt Aguilar, Janell Wheeler & the rest of the staff at the site. Catch the newest episode right here or subscribe on iTunes today!