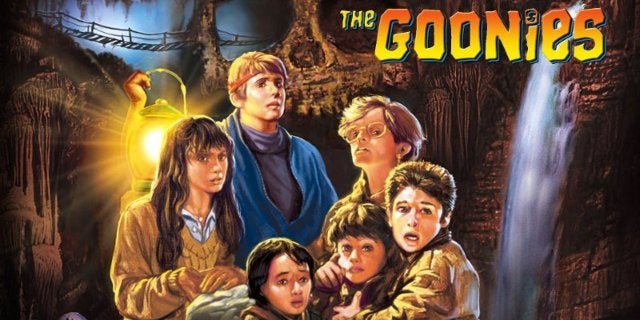 If that headline is confusing, that’s okay – so is the premise of this new TV series, which has already gotten a pilot order from Fox. In basic terms, the series centers on a substitute teacher who recruits a trio of students to help re-enact the iconic Amblin Entertainment coming-of-age movie, The Goonies. The series pilot will be written by Sarah Watson (The Bold Type, Parenthood), and THR provides the logline for the series, which you can read below:

“After failing to make it in New York and carrying a heavy secret with her, Stella Cooper returns to her distressed automotive hometown to substitute teach. She finds inspiration, hope and ultimately salvation when she agrees to help three students who are pursuing their filmmaking dreams by putting on an impossibly ambitious shot-for-shot remake of one of their favorite movies —The Goonies. Over the course of the season of the potential series, their passion will inspire a town in desperate need of hope in this love letter to the power of cinema, storytelling and dreams.”

The series is being executive produced by Greg Mottola (Superbad), and he will also direct the pilot. This unorthodox premise for a series is reportedly part of an overall strategy by Fox TV to push some new (as in risky) concepts for TV shows on the network, with the intent to get back to the heyday of groundbreaking hits like The Simpsons or Married With Children.

It’s arguable whether or not The Goonies represents a “risk” per se; the 1985 film by Richard Donner (with a script by Chris Columbus and Steven Spielberg) remains a cult-classic YA film, that helped propel the careers of Sean Astin, Josh Brolin, Corey Feldman, Martha Plimpton, Joe Pantoliano, Robert Davi, and many others. The modern TV landscape has numerous examples of TV series that are built off nostalgia – whether it’s reboots of series like MacGyver, Hawaii Five-0 or Magnum P.I., or series that play up pop-culture nostalgia and references, such as The Goldbergs. Each of the aforementioned shows has survived the test of a first season renewal – so a series that brings some narrative novelty and a strong nostalgia connection is one that could potentially be a hit.

Meanwhile, Goonies fans have never lost hope that direct sequel to the original film could happen – even though the cast has been knocking down the notion for years. Goonies should never say “die” though, and if this new series is a hit, who knows what a Goonies resurgence on TV could do for the film prospects?

Did you know ComicBook.com has a podcast? That’s right folks, ComicBook Nation is available every Wednesday and Friday bringing you the best breakdowns of the week’s biggest news from Kofi Outlaw, Matt Aguilar, Janell Wheeler & the rest of the staff at the site. Catch the newest episode right here or subscribe on iTunes today!