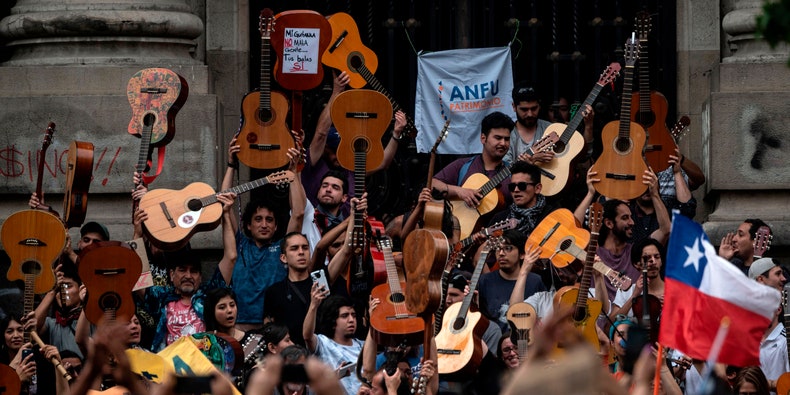 On Friday afternoon, around one million people gathered in the streets of Santiago for a protest calling for widespread change and the resignation of President Sebastian Pinera. During the massive protest, thousands of people began singing “El derecho de vivir en paz” (“The Right to Live in Peace”) by Víctor Jara—an artist and political activist who was tortured and killed by dictator Augusto Pinochet’s soldiers in 1973. Watch it happen below.

Santiago was brought to a complete standstill due to the number of people in the streets. The protests in Chile began over a public transportation fare hike, but the issue is considered a catalyst for protests about the need for greater change surrounding inequality, privatized health care, low wages, inadequate pensions, and more. It’s been a violent time in the city; as many as 19 people have died. A state of emergency has been declared.

‘Breakin’ Star Bruno ‘Pop N Taco’ Falcon Dead at 58
Motherland: Fort Salem Season 3 Episode 2 Review: The Price of Work
Cory Barlog Pleads for Human Decency and Respect After God of War Ragnarok Fans’ Behavior
Dakota Johnson On What Her Off-Camera Relationship With Fifty Shades Co-Star Jamie Dornan Was Like While Filming The Movies
‘The Black Phone’ Fleshes Out a Lean and Mean Tale: Comparing the Short Story and the Movie