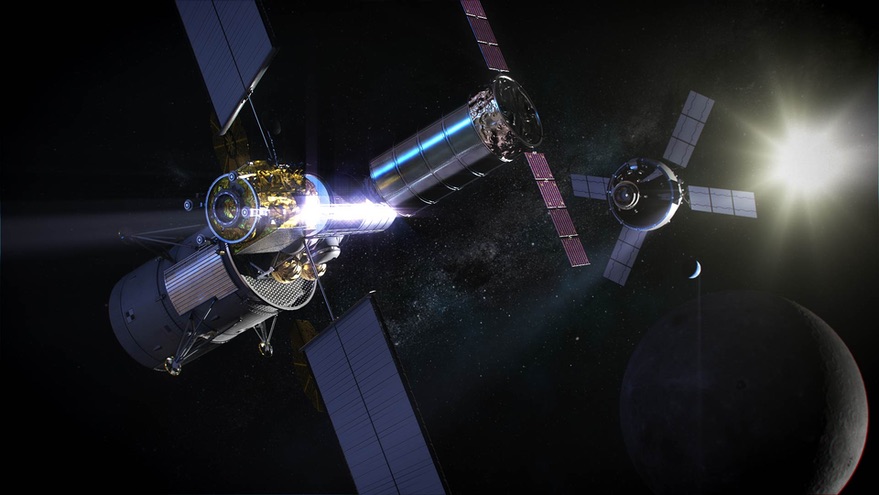 President Trump and Vice President Pence directed NASA to achieve the challenging goal of landing U.S. astronauts on the moon by 2024. NASA Administrator Jim Bridenstine has correctly stressed having this near-term goal should help the program succeed. This should drive NASA to a streamlined program with straightforward procurements. It should drive NASA to form a lean, skilled management approach that provides focus to design and integration detail and achieving milestones on schedule.

The single highest priority from the White House is for NASA to land U.S. astronauts on the moon by 2024. NASA has mixed other priorities into its plan that make 2024 nearly impossible to achieve. NASA’s current approach is overly complex and risky.

A small space station designed to orbit the moon and support future Mars missions, Gateway is a NASA internal priority.

The Gateway is arbitrarily imposed and is slowing America’s progress back to the moon. Its developments are being built from the ground up. For missions to the moon, each flight element is required to fit on commercial launch vehicles with limited lift capability. But, because of the lift limitations, NASA needs transfer vehicles and refueling elements to enable assembly and fueling in space. It’s a complex process, made more so by the fact that the lunar lander and ascent vehicles are launched separately to the Gateway for assembly and fueling.

NASA is pursuing commercial services contracts for its needed acquisitions; however, looking at the history of the services-oriented Commercial Crew Program, which was to fly in 2015, we find ourselves in 2019 still paying Russians to fly our astronauts to the International Space Station. Bridenstine revealed concern recently in advance of SpaceX CEO Elon Musk’s private enterprise Starship announcement, saying, “NASA expects to see the same level of enthusiasm focused on the investments of the American taxpayer. It’s time to deliver.” Bridenstine’s reference was to the SpaceX $2.6 billion commercial crew contract. Is this services model for the Commercial Crew Program going to get us to the moon anytime soon?

All this complexity is being orchestrated to send the first crew to the moon. It is overly complex and likely not possible by 2024. If just one of these numerous new developments fails to deliver on time, the house of cards falls apart. With the right requirements, the Gateway can provide value for Mars mission preparations, but it should be deferred for now.

Bottom line — this lunar program should be streamlined.

There is no need to reinvent the wheel by creating an approach with new flight elements to get to the moon. Instead, NASA just needs to finish what it has already started.

Through a House Science space and aeronautics subcommittee hearing Sept. 18, I laid out an approach and rationale for achieving the earliest moon landing, accomplished by effectively managing the programs currently making progress under contract and designed for these missions – Orion and Space Launch System (SLS), including the SLS 1B Cargo version. NASA should focus major new development on an integrated lander/ascent vehicle launched on an SLS 1B. With Orion launched on a separate SLS, the lunar landing would be achieved with these two flights, and at most one commercial launch with additional fuel. This is a much simpler approach with a significantly higher probability of success. The hearing testimony provides further detail.

NASA must organize to lead and effectively manage the simplified program focused on completing Orion, SLS, and a new integrated lander to achieve the earliest possible landing dates with sustainable capabilities. As I proposed in my recent congressional testimony, “a strong Systems Engineering and Integration effort across the program, and a prime integration Contractor are needed…”

This is a time to leverage ongoing investments and add new energy to get them done- not to start several new complex projects/procurements from scratch to do the same thing with a riskier technical and operational approach.