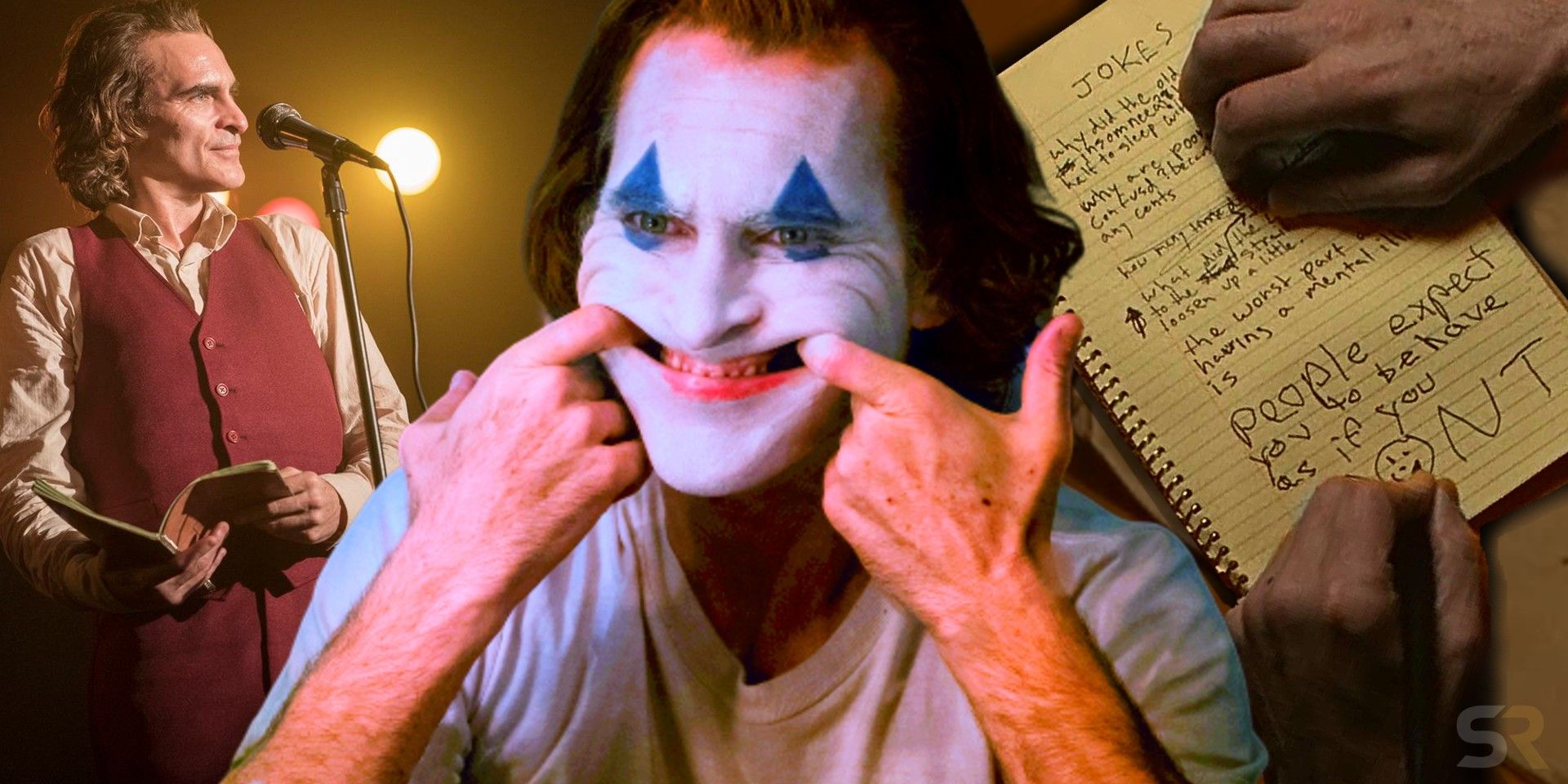 One of the most disturbing, but insightful, elements of the new Joker film is the journal Arthur Fleck keeps throughout the film. Doubling as his joke book for his stand-up routine, the journal, when seen on screen, serves as a litmus test for the rising rage and insanity Fleck feels until the movie’s cataclysmic end.

Ordered as a therapeutic tool by his state-assigned caseworker, Fleck uses the book in Joker to track his thoughts from day-to-day, and, as he boldly announces to that same woman, “all [he has] are negative thoughts.” This is reflected in the journal’s pages, as the writing turns from observational, if dark, humor, t0 straight-up sadistic drawings of women in bondage and people meeting violent ends.

It’s hard to catch a full view of the journal’s contents during the movie, and what is visible is often unintelligible due to grammatical errors and misspellings showing the increasingly rattled state of Fleck’s mind as he transforms into the Joker. Despite the lack of clarity, there’s still a flavorful narrative that shines through in the small glimpses we do get at the journal’s contents

Why did the old… [blocked]

Why are poor… [blocked]

These two attempts at humor indicate a couple of the more common issues people struggle with every day, and which Arthur Fleck obviously wrestles with himself: insomnia and poverty. Fleck lives in a dilapidated apartment with his mother, who reaches out to Thomas Wayne (the future Batman’s father, and as alleged in her letter, Arthur’s father as well) for financial support. The insomnia is less prominent in the movie, but makes sense, as lack of sleep is a known potentiator for mental imbalance. The phrase “any cents” is also one that will be repeated, and is clearly a misspelling of “any sense,” signaling Arthur’s struggle to find sense in his life.

how many are times did… [blocked]

What did the… [blocked]

to the strait… [blocked]

loosen up a little.

This seems to be a joke aimed at homophobia, which illustrates Fleck’s lack of understanding or empathy for those persecuted for being different, even though he himself knows all about what such treatment is like.

having a mental illness

RELATED: Everything In Joker That’s Not Real

And of course, here we get the heart of the movie, which despite the outcry of haters in their opposition to its supposedly mindless violence, Joker does contain in spades (no pun intended). Arthur suffers from a condition that makes him laugh uncontrollably during inappropriate situations. It makes for a very uncomfortable and socially alienating life for the movie’s protagonist. He declares late in the movie that he never had a mental illness – that it was just “him” all along – but this is probably due to his depravation of medication (due to state fund-cutting) and his increasingly fractured thinking caused by his quickly devolving quality of life.

curd but he didnt care. h….[blocked]

seltser. I left the store with… [blocked]

my pocket. I wondered what I could..[blocked]

it when I noticed that there was a…[blocked]

ambulance and the paramedics were standing over the homeless man. I went over because I was inturested in what happened to him as I got near them I heard them say “what a way to go. On the sidewalk. what?! can you imagine that?? dead on the sidewalk with people stepping over you. Maybe he’s happier but I don’t want to die with peepl just stepping over me. I want people to see me.

i just hope my death makes more cents than my life

Imagune your whole life ends on a sidewalk. I wonder how old he was and how long noone cared about him for.

Here, Arthur starts to lose his moral compass, reflecting on an item he stole from a store, and what else he could get away with. But he also shows that he still, at this point, has quite a penchant for empathy, discussing the sadness of a homeless person dying on the street, unloved and alone. He also refers back to the first joke in his journal with the word, “cents,” only even more clear here as he appears to be contemplating suicide, thinking it will make “more cents” (sense) than the confused struggling life he’s been leading.

[blocked]…was probably a drunk. What??]

[blocked]…ppost to take care of every drunk]

[blocked]…hold a job?? its about time]

Here we start to see Joker really starting to shed his morality, losing all feeling he had for the homeless man, and speaking of him as a probable drunk that society should discard. Throughout the journal, and in the movie, we see Arthur striving to find or understand his place in the world. After his subway killings got attention, this thought comes to the forefront when he says “for my whole life, I didn’t know if I even really existed. But I do, and people are starting to notice,” which seems to be him thinking he’s finally made “cents” of his life.

In the end, we see Fleck fully transform into the hedonistic nihilist the Joker character has always been portrayed as, killing without remorse and causing chaos in his wake. The journal, which has been used as a portal into the Joker‘s mind before, just gives us a bit of extra cognition regarding the character’s descent from harmless wallflower to murderous misanthrope.

MORE: The Biggest Clue Joker Is In Arthur’s Head

‘The Shining’ Actor Joe Turkel Has Passed Away at 94
Book Riot’s Deals of the Day for July 4, 2022
Crosby, Stills & Nash Return to Spotify After 5-Month Boycott
Harry Styles Cancels Copenhagen Concert After Tragic Mall Shooting
Stressed? 4 ways to stop your brain from telling you the worst will happen