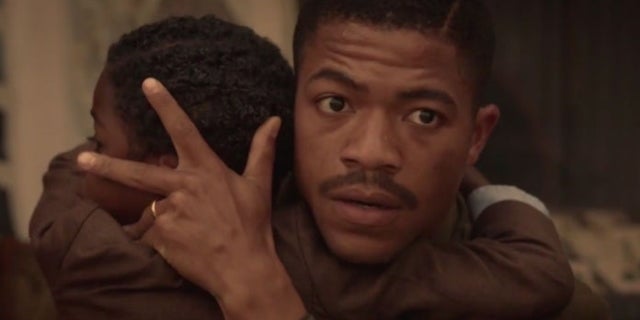 The series premiere of Watchmen from HBO and Damon Lindelof finally aired last week and followed Detective Angela Abar (Regina King) in an alternate future where vigilantes are outlawed and cops keep their identities hidden beneath masks. The show’s debut was a success, earning a “Certified Fresh” score on Rotten Tomatoes as well as a 5 out of 5 rating from ComicBook.com. The series opened with a harrowing scene about the real-life Tulsa Race Riot that occurred in 1921 and featured actor Steven G. Norfleet as the father of the young boy who would grow up to become Louis Gossett Jr.‘s character. ComicBook.com had the opportunity to speak with Norfleet about working on Watchmen, the impact of his scene, and LGBTQ representation in comic book films and shows.

ComicBook.com: The big twist of the first episode is that the opening scene is about Louis Gossett Jr’s character. How did it feel to find out that you were playing this iconic actor’s father?

Steven G. Norfleet: It’s still kind of unbelievable, you know? I think even more when I get the chance to see how it all comes together. What kind of bring us the sense of peace. Because now it’s just like, ‘Wait, this just can’t be right.’ Even though I know what’s happened, it’s like I still can’t believe it’s happening. And so, I’m excited myself just to see how it kind of all unfolds on screen.

After the episode aired, one of the biggest things discussed on social media was the opening scene. A lot of people didn’t know that the Tulsa Race Riot was a real thing. Was that something that you were hoping would happen, that more people would learn about it? Were you expecting such a strong response?

That’s what I wanted the most out of all of it, because I thought it was so … It’s so cool that Damon and the team, how they intertwine our reality with this world of Watchmen. And going into it, I wasn’t really too familiar with the Race Riot myself, and so, getting this opportunity to be a part of this show, it forced me to go back and brush up on my own history. Some things we don’t get to learn in school. I feel like our history sometimes is kind of pushed to the back, and not something that is right in front of your face. And so, I feel like Watchman and HBO gave the world the opportunity to be entertained and to also learn. So, that for sure was something that I was hoping would be the best received out of the whole episode.

You mentioned Damon and he’s such a big name in television. Just curious what it was like to work with someone like that?

He was awesome. I mean from day one he was … I appreciate his camaraderie on set and just seeing how he vibed with everyone. And I also loved how sensitive he’s been with this world and how sensitive he’s been with using our history. Before we started shooting, we were made aware of how hands-on they were when it came to dealing with the Tulsa Race Riot and recreating it. And I really appreciated that. They wanted to make sure to the T that it was done properly, and it was done right, and it did justice to the people who lived this back then.

In addition to the real history, there’s also Watchman history. Were you a fan of the comic before this or have you read it since?

I watched the movie beforehand. But with getting the part, I have a couple of buddies who are really into the comic book world, and so they kind of have been helping me to understand how it all goes together. And just the other day, I watched the, I believe it was the unlimited version of the movie, which was kind of like three and a half, almost four hours. Just to really get a grasp of how it all works. I think I’ve been enjoying it so much because it is a world that is unfamiliar to me, but it’s a big world within itself. And to see the fan base for the comic books, and for the movie, and now for the show, and see how eager they’ve been to see how it all unfolds, it has made me more eager to really know the world myself.

I know that you probably can’t say for sure, but do you think that there’s any chance that we’ll see more flashbacks from that time period? More of Louis’ history?

Do you have any fun set stories or anything that you’d like to share from your time on the show?

Well, for sure working with my wife, who is Alexis Louder, and my son, who is Danny Boyd Jr., we created such a bond that we all still talk today.

Yeah, that has been awesome. And I worked on Good Girls on NBC, and Danny Boyd Jr. also worked on there as well. So, there have been times where we’re both out in Los Angeles and we’ve hung out and we have a group chat that we still constantly communicate. So, the love that started with Watchman has carried to today, and that’s something I’m very happy that has happened.

Switching gears a little bit, you just got married. Congratulations!

Now that you’re a part of the comic book world, I’m curious if you have any opinions about representation, or lack thereof, of the LGBTQ community in these comic book stories?

I definitely think it’s kind of a slowly but surely process when it comes to the LGBTQ community and being involved in so many creative entertainment processes. So, I’m hopeful.

It may not be represented now, but we see the movement that it’s made in television and film, and I think it’s going to make its way to the comic book world as well. So, as of now, it may not be the standards, but I think give it time, we would definitely start to see a change.

‘Final Destination 6’: Jeffrey Reddick Teases That the Next Movie Switches Up the Franchise Formula
Dakota Johnson On What Her Off-Camera Relationship With Fifty Shades Co-Star Jamie Dornan Was Like While Filming The Movies
R. Kelly Sues Metropolitan Detention Center Brooklyn Over Suicide Watch Conditions
Ubisoft returns with a Ubisoft Forward event in September teasing news and updates
Hugh Jackman Has Seen Elvis, And He Has Thoughts On Austin Butler, Tom Hanks, And More