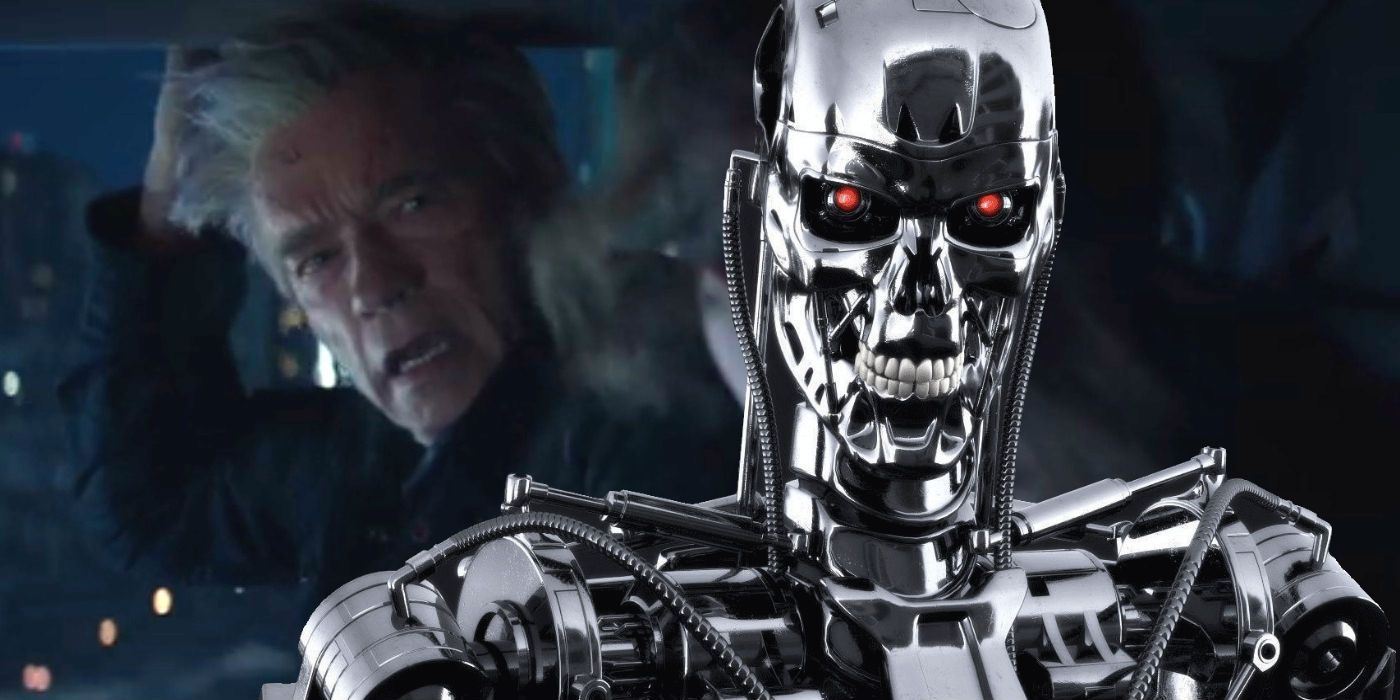 The Terminator franchise has worn its “I’ll be back” catchphrase thin by shoehorning it into every single movie. Undoubtedly one of the most iconic quotes in movie history, Arnold Schwarzenegger‘s “I’ll be back” is a gem of a line that even people who have never had the pleasure of watching a single Terminator movie are completely familiar with. Like “may the force be with you” and the misquoted “play it again, Sam” Arnie’s most famous line has transcended its humble origins and seeped into wider pop culture at an almost subconscious level. People will go about their every day lives saying “I’ll be back” in a faux-Austrian accent and many will have no recollection of the context it was first used; a testament to the genius and simplicity of the gag.

Schwarzenegger first utters the famous quote in the original 1984 Terminator film. Searching for his assassination target, Sarah Connor, the T-800 enters a police station but is refused entry. After dropping the line in question and exiting the building, the cyborg returns by smashing a van through the cops’ front desk. It’s a brash, typical action movie-style joke, but one that works effectively and can be considered a highlight of the film, encapsulating the casual violence of the Terminator character. In the far-superior Terminator 2: Judgement Day, good-guy Arnie uses the line again in a great callback to the original, solidifying “I’ll be back” as an all-time classic movie quote.

Since then, however, the trope has featured in every subsequent Terminator movie in some form or another, and the law of diminishing returns is very much in effect. Terminator 3: Rise of the Machines uses two different variations, with Arnie shifting to “she’ll be back” and then “I’m back.” John Connor says the quote in Terminator Salvation, Schwarzenegger’s T-800 Guardian uses it in Terminator Genisys and Sarah Connor takes her turn in the upcoming Terminator: Dark Fate.

Like any running joke, the impact of “I’ll be back” has diminished with each use since Judgement Day, so much so that the Sarah Connor example in Terminator: Dark Fate feels particularly forced, as much as Linda Hamilton‘s ice-cool delivery tries to make out like this is the first time the line has ever been recycled. Over the years, a piece of dialogue that was once a sharp and witty retort from a classic movie villain has been turned into a tired and hackneyed cliche; a requirement to tick off the checklist rather than the fun, knowing wink of Judgement Day. The more recent Terminator movies don’t even use the line within the context of an actual sequence, dropping the set-up and punchline of the original scene in favor of making the quote itself the focus.

The most frustrating consequence of dragging the same line out time and time again is that “I’ll be back” had already achieved iconic status in the 1990s after Judgement Day was released. No subsequent reference has enhanced that reputation or made the quote any more famous, in fact, the opposite could be argued, since “I’ll be back” has now been used in as many bad films as it had good, marring its stature by association.

The Terminator franchise is also guilty of repeating Arnie’s penchant for sunglasses. Once again, the original idea made sense, since the T-800 had damaged his eye and required sunglasses in order to blend in. Judgement Day called back to this moment and forever associated the leather-and-shades look with Arnold Schwarzenegger’s Terminator, but the pattern really should’ve ended there. Perhaps the overuse of former glories is indicative of the Terminator franchise’s problems as a whole. While Terminator: Dark Fate is attracting positive reviews, the previous 3 attempts were largely panned, and generally criticized for a lack of new ideas, a retrospective outlook and trying too hard to recapture the magic of the first two movies, all of which can be summed up in three words: “I’ll be back.”