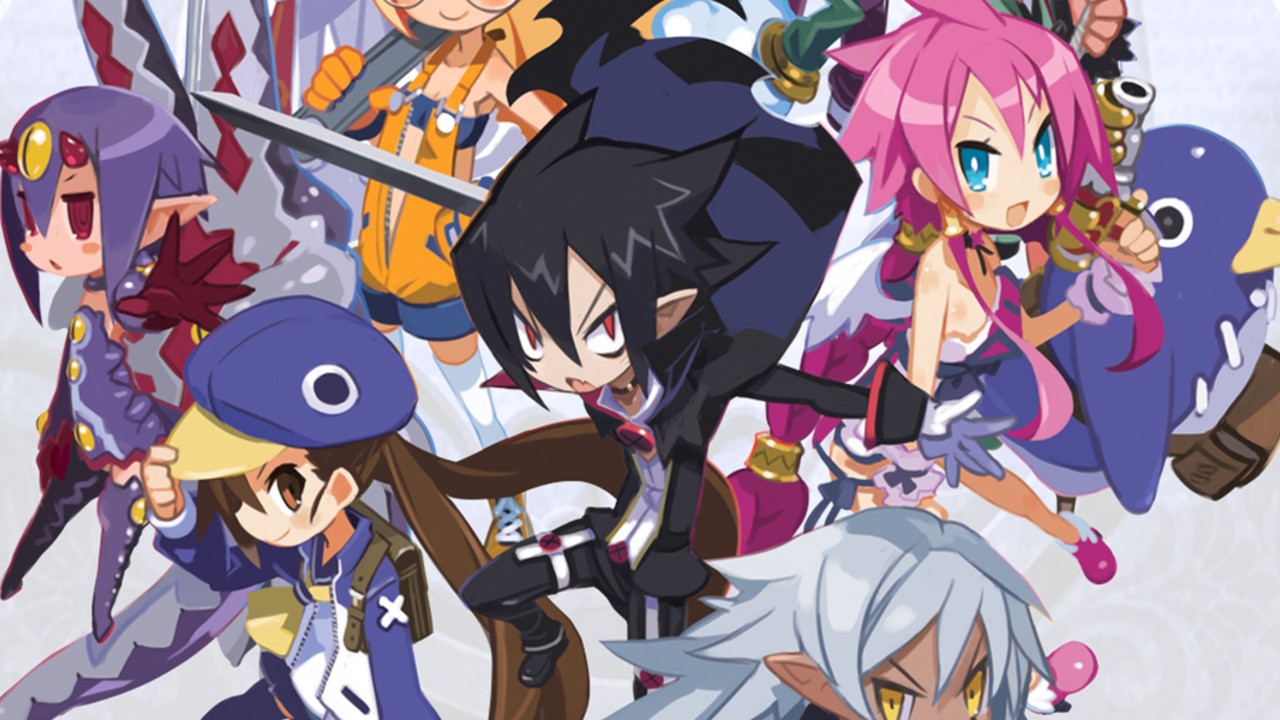 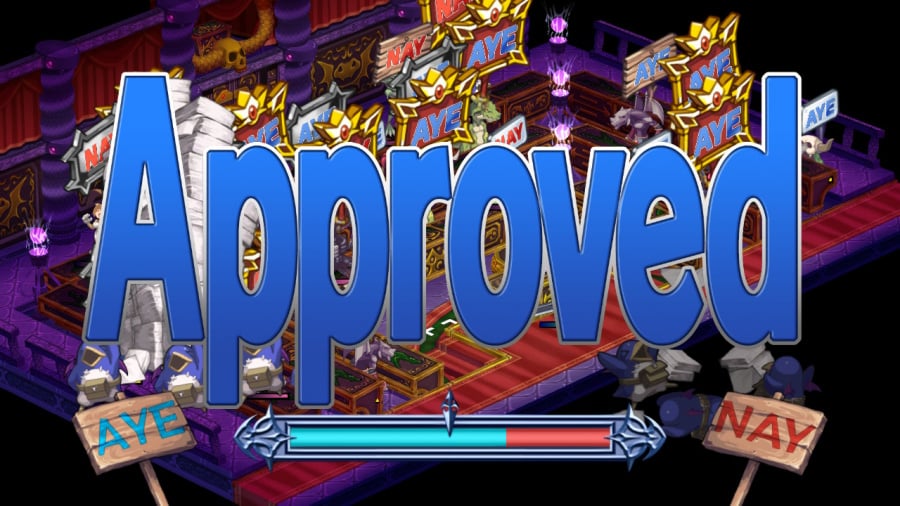 The Disgaea series has always been one of those in gaming that could best be described as an ‘acquired’ taste. The sheer amount of complexity and micromanaging offered up by each game is nigh peerless in the genre, and though these games are a veritable feast for those who love a nice thousand-hour grind in their RPG, it can be rather intimidating to approach Disgaea as a newcomer. Indeed, there have likely been many newcomers in recent years, as the series has begun to make the jump to the Nintendo community via a couple of well-received re-releases for the Nintendo Switch.

The latest in this line is Disgaea 4 Complete+, an enhanced edition of the 2011 PlayStation 3 classic, and we can confidently say that it’s an excellent place to jump in for anybody curious about the franchise. Make no mistake, Disgaea 4 still has a rather daunting barrier to entry, but those who stick it out will be pleased to find a high-quality and content-stuffed SRPG experience that stands high in the Switch’s software library. 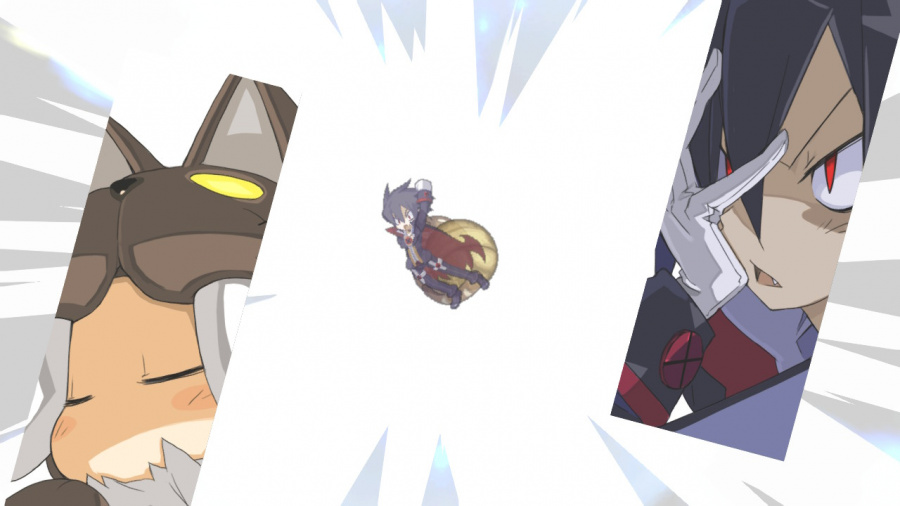 Disgaea 4 primarily follows the story of Valvatorez, a sardine-obsessed vampire who finds himself working a shoddy netherworld job as a Prinny instructor following his renouncement of drinking blood. After the “Corrupternment” he works for threatens the well-being of his beloved population of Prinnies, Valvatorez and his sycophantic werewolf servant, Fenrich, begin gathering allies to stage a rebellion to overthrow the oppressive political regime they live under. Of course, it’s quickly revealed that there’s far more to the conflict than it first seems, as new foes are introduced and the stakes are raised increasingly higher. To be frank, the plot becomes increasingly more absurd and unwieldy as the hours roll by, but this absurdity also proves to be one of the strongest features.

See, although there are plenty of moments of genuine sincerity, Disgaea 4 is just about the farthest thing from a game that takes itself seriously. This is the sort of game where you may find yourself fighting a zombie named “AAAAAAAAAAAAA”. This is the sort of game where deceased human souls are kept in a purgatory-like state as idiotic exploding penguins that end every sentence with “dood”. Virtually every character, mechanic, plot beat, or item description oozes this sort of off-beat humour; it’s present in all the details big and small.

Some may be put off by this focus on irreverent and often ridiculous humor, but we rather appreciated how it gives the whole experience a distinct and welcome flavour. While games such as Fire Emblem: Three Houses focus on weighty, emotional decisions and strong characterization, Disgaea 4 is perfectly content to present you with fish-loving vampires and unfathomably powerful demonic entities that settle their conflicts with threats of lawsuits. Tiresome as some of the recurring gags may be, never let it be said that Disgaea 4 tells a trudging or boring tale. 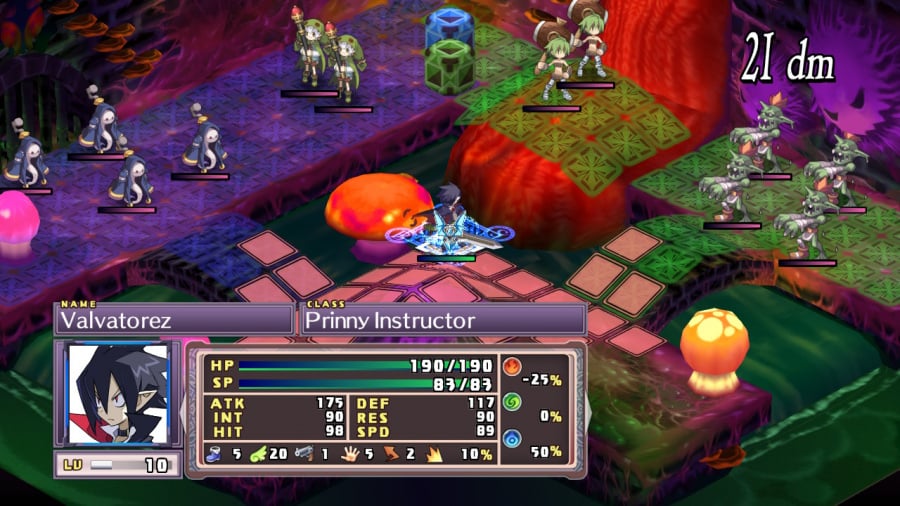 Much of your time will be spent manoeuvring your team around grid-based battlefields viewed from an isometric angle, and it’s here that Disgaea 4 feels the most ‘conventional’. Your team can be comprised of various classes spanning typical RPG roles, and they each must be moved one-by-one to different places on the map where they can be most effectively used. Co-operation between teammates plays a big role in this battle system, where multiple attacks on a single enemy unit can stack into a combo, and you’re rewarded with special moves when units attack while standing adjacent to each other.

Often, the battlefield is also divided up by several differently-coloured Geo Tiles, which alter the conditions of any units standing on them with modifiers like dispersed damage or swapping the values of everyone’s HP and SP pools. It’s clear that the developers over at Nippon Ichi have done their homework on proper battle design for an SRPG, as the system that lies at the foundation of Disgaea 4 is satisfying and constantly rewards thoughtful and calculated play.

Of course, there’s a lot more than what’s merely ‘expected’ out of an SRPG, as much of the eccentric humour extends to the gameplay as well, neatly imbuing it with some legitimately cool mechanics. For example, you can counter a counter-attack into a counter-attack. You can pick up team members to either chuck across the map, or you can stack multiples of them into a looming tower that has some serious offensive heft. You can transform certain party members into weapons that can then be wielded by other party members. 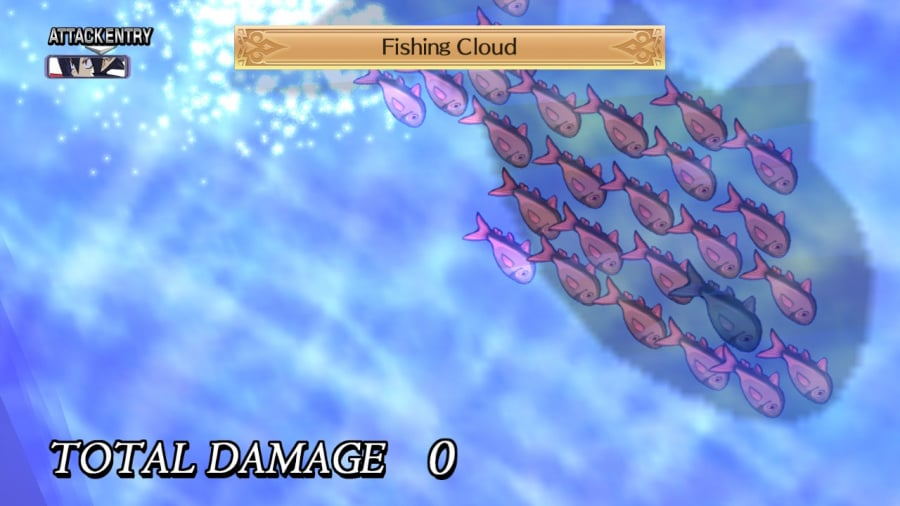 Off-the-wall ideas such as these could potentially run the risk of seeming superfluous or distracting in a lesser game, but the well-made underlying foundation of Disgaea 4’s battle system means that these comedic and over-the-top elements add to the experience rather than take away from it. They open the door to all manner of extra ridiculous strategic options the likes of which you likely wouldn’t have even thought of, making each battle a dynamic and interesting experience.

A lot of this complexity is present off the battlefield, too, where all manner of support services and shops offer diverging paths of progression. For example, there’s an “Item World” unlocked relatively early that allows your party to dive into randomly-generated worlds inside any item they could equip or use, and if they can overcome the stiff enemy resistance within, the item will level-up and see it’s usefulness dramatically increased.

Or, in another example, there’s a senate of demonic monsters that can vote on bills you raise which can grant you boons like access to better shop items and new party members. Before the vote, you can meddle with the senators through bribes, murders, or chloroform and skew the vote in favour of your party. Disgaea 4 offers up a level of finesse that most other peers in its genre could only dream of; not only does it have all the traditional trappings you’d expect out of a standard strategic RPG, but it continuously piles on new ways of tweaking characters and equipment to better min-max your party’s output. 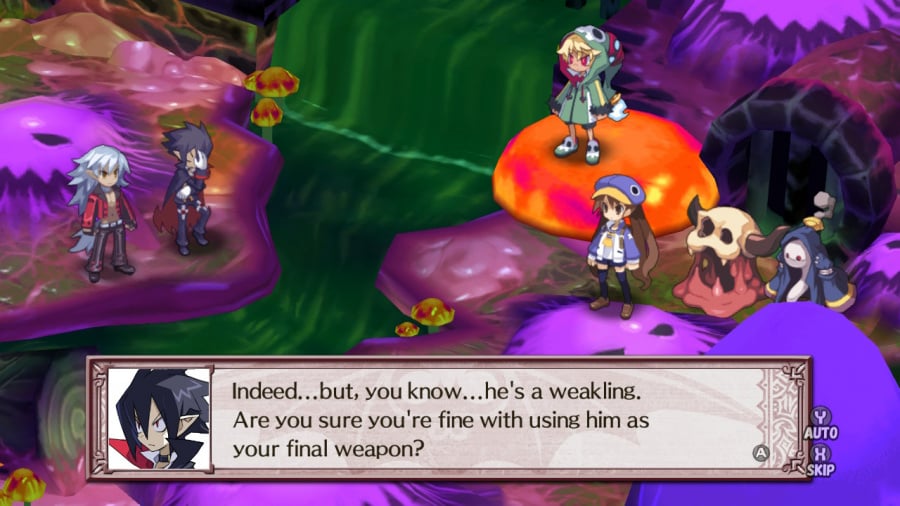 The flipside of this, however, is that Disgaea 4 isn’t necessarily concerned with organizing all this complexity and content in an easily approachable manner. There are tutorials, of course, but the sheer scope of just what you can do with these endless interlocking systems isn’t explained in its fullest. Disgaea 4 expects that you’ll do your homework; that you’ll sit with it for hours on end and slowly acquire an understanding of what it has to offer through trial and error.

It’s easy to miss things, then, and discover things late in your playthrough that would’ve been immensely helpful had you known about them a dozen hours earlier. Due to this, newcomers may be put off by either a (justified) lack of understanding or by the intimidating time investment that’s demanded. In short, Disgaea 4 plays ‘hard to get’ a little too much, unnecessarily obscuring its more enjoyable elements by throwing everything at you and expecting you to figure out how it all fits together.

From a graphical standpoint, Disgaea 4 utilizes a simple but striking visual style that mixes high-quality anime 2D sprites with simplistic 3D backgrounds. The environments your characters traverse are admittedly a little basic for our liking, but they’re nonetheless well-designed and fulfil their purpose well. The real stars are the expressive character portraits and sprites, constantly being stretched, compressed, and gyrated around as ridiculous special attacks are pulled off with bombastic flair. There’s a nice style present to Disgaea 4’s visuals that matches its overall humour, and though this isn’t necessarily the release that we’d highlight as one to showcase the power of the Switch, performance is great and it’s tough to fault the developers for running with a look that works well. 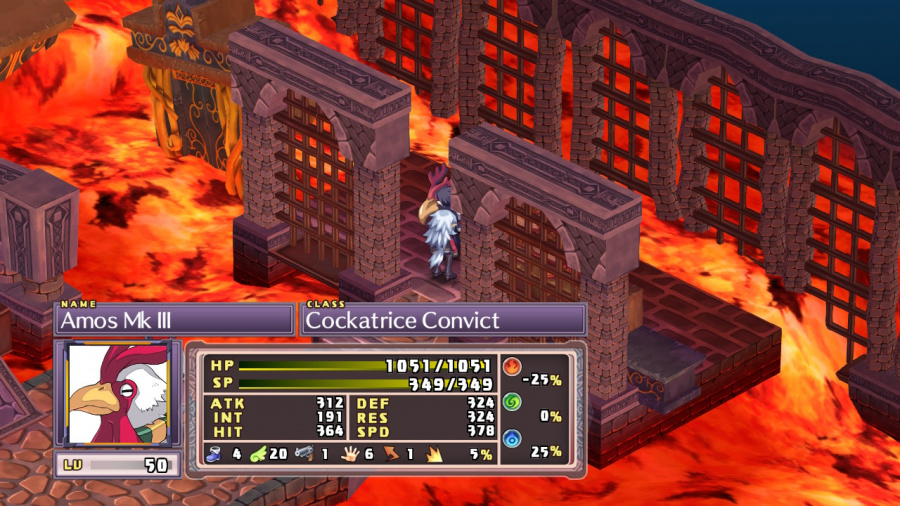 This being the “Complete+” edition of Disgaea 4, plenty of extra features and content not included in the original release has been thrown in. Most notably, quality of life features introduced in Disgaea 5 – such as the Cheat Shop and the Innocent Warehouse – have been seamlessly integrated into the original game to make it that much smoother an experience. Additionally, all content from DLC and past re-releases have been tossed in, along with the expected resolution bump. Those of you that have played it to death already in one of the previous releases will want to think a little harder about if the new additions justify the cost of admission, but make no mistake, Disgaea 4 has never looked or played better than this.

We feel it bears repeating, too, just how much content Disgaea 4 has to offer for those who are easily enamoured with its specific brand of gameplay. Completing the main story mode could be likened to finally completing the ‘tutorial’, with the real game beginning in the mountain of post-game missions and super-bosses that will surely test the limits of what you can do. The odds are very good that you’ll never see everything in Disgaea 4 Complete+, simply because of how it doesn’t seem to end. There’s something to be said about this sort of experience, like a gift that keeps on giving or a deep well that you can always return to when you have the need. Admittedly, Disgaea 4’s main hooks will only prove effective on a very specific and niche kind of player, but we’d encourage you to at the very least give the demo a shot and see if it’s the sort of thing you could grow to enjoy.

It’s hard to recommend a game such as Disgaea 4 Complete+, as it’s the sort of game that you either love or hate – there really is no in-between. On one hand, you have a mountain of engaging content, oodles of complex gameplay systems to learn, and a refreshingly irreverent tone to keep it all interesting for dozens of hours. On the other hand, these things are presented to you in an overwhelming and difficult to digest manner that will only appeal to a small subset of players. All that being said, we’d give Disgaea 4 Complete+ a high recommendation to veteran fans of the genre who are looking for something specifically geared to them. For newcomers, we’d still recommend it, but we’d also encourage you to do your research and make sure you’re prepared for what will likely feel like a demanding experience at first.