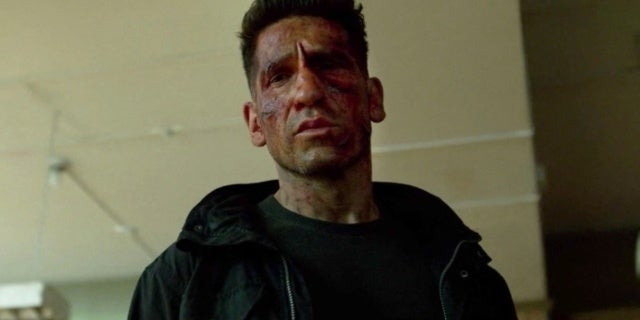 Jon Bernthal pulled no punches when playing Frank Castle on Marvel’s The Punisher. Bernthal insisted on going “full-out” on the Netflix-Marvel series, where the stunt performers had one mantra: “You do it real and you do it once.” When playing out Castle’s bloody one-man war on crime, Bernthal was left battered and bruised: the star famously broke his hand and was separately knocked unconscious when filming the sophomore season of The Punisher. Bernthal once compared getting banged up on Punisher to a boxing match, telling Men’s Health, “I’m not gonna be the one to say I’m gonna walk away.”

“I think the cool thing about those Marvel shows, those Netflix-Marvel shows, I think what made them stand apart a little bit is that we were trying to do movie-level fights in a TV show. And the brass tax of that is you’re trying to fit a movie-level fight into the schedule of a TV show,” Bernthal said at Fandemic Tour Houston. “In a movie, you might have two months to shoot an action scene, you rehearse it forever. We’ve gotta rehearse it, learn it, shoot it, usually in an afternoon. It’s much less time. So our saying on our show is, ‘You do it real and you do it once.’ So if you’re throwing someone through a wall, just throw them through the damn wall. Do it hard, do it once.”

Bernthal’s real-life injuries were incorporated into The Punisher Season 2, where Bernthal soldiered on despite suffering a broken hand, torn ligaments and a dislocated thumb.

“On Punisher, I definitely got knocked unconscious a few times. I broke my hand, I tore some ligaments, dislocated my thumb. Yeah, there’s a lot of injuries, but all worth it,” he said. “If you saw Punisher Season 2, that whole thing with my broken hand, my hand that got shot? That’s because in that first bar fight, it was a three-day fight, and on the first day, I broke my hand. On the second day, I tore a bunch of ligaments. On the third day, I dislocated, so they had to do an emergency surgery. So they wrote that thing in, because we had to go back to work the next day. So they wrapped up my hand and I kept shooting. That’s why that was in there. So you get hurt.”

The star has long had a “deep, deep, deep respect for the stunt community,” and believes stunt performers deserve their own Oscars category.

“They’re my brothers, they’re the people I’m closest with on set. I think it’s absolutely a crime there’s not an Academy Award for stunt performers. The stunt community, they’re the ones really putting it on the line,” Bernthal said. “The creativity that comes out of the stunt community is mind-boggling. I think nowadays, it’s one of the key reasons why people go and seek out entertainment, because of how good the stunts are, and there are people actually doing that. I train with those guys every day, I try to go in full-out. It’s kind of the mantra of a stunt guy, ‘Do it hard, do it once.’ Don’t pull a punch, because then you’re gonna have to do it 15 times. ‘Just hit me, and do it once.’ So we try to kind of live by that.”

Bernthal hopes to continue on as the Punisher despite Netflix pulling the trigger on cancellation, saying at Fandemic, “I love Frank, too. I really don’t have any desire to move off of him.”

All episodes of The Punisher are streaming on Netflix.

Sam Asghari Calls Married Life with Britney Spears ‘Surreal’
Harry Styles Cancels Copenhagen Concert After Tragic Mall Shooting
Enter the Bizarre World of ‘Lorelei and The Laser Eyes’ Next Year on Switch and PC [Trailer]
‘The Black Phone’ Fleshes Out a Lean and Mean Tale: Comparing the Short Story and the Movie
R. Kelly ‘Survivor’ Kitti Jones Says He Needs To Admit What He Did, Get Therapy