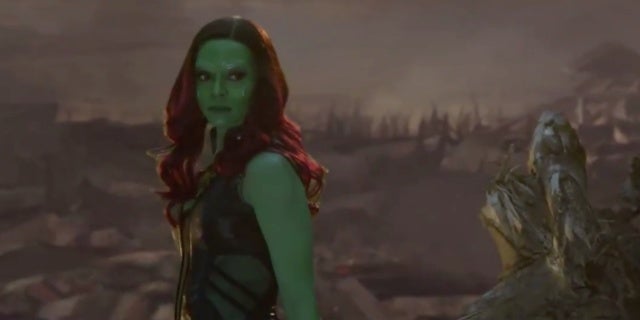 Among the many Marvel Cinematic Universe characters to be killed off in Avengers: Infinity War was Gamora. Unlike Black Panther, Falcon, Doctor Strange, Scarlet Witch and others who were killed by Thanos snapping his fingers, Gamora was a permanent death. The character’s leap on Vormir (or — toss — to be more accuracte) lead to her demise as Thanos obtained the Soul Stone. According to Hawkeye in Avengers: Endgame, such a death is irreversible. It’s the same reason why Black Widow could not be saved with the Infinity Stones. However, using time travel, Endgame writers Christopher Markus and Stephen McFeely found a way to bring Zoe Saldana’s Gamora back as a means to have her available for James Gunn’s Guardians of the Galaxy Vol. 3.

While writing the massive crossover films did come with near complete freedom from restraint for future projects, it did call for at least one act of service for another film. “It’s us and [directors Anthony Russo and Joe Russo] and [Marvel Studios president] Kevin [Feige], but it’s not like Kevin said, ‘You know what, we had a meeting and we’re going to have these three streaming services, so let’s make sure…'” McFeely said. “No, if anything, I don’t know what all the streaming shows are, but it feels like they might come off of Endgame in some ways, but at no point did anybody say, ‘That’s what we should do, so therefore, sprinkle that in.'”

More specifically, though, Gamora is an example of being influenced by a future film. “There are the parts so that [Guardians of the Galaxy Vol. 3 director James] Gunn could do whatever he needs to do that,” McFeey said. “That was just basically, you saw the behind the scenes stuff where they all kneel and she sort of boogies off set. If you let that in, you would’ve gone, ‘Oh, she’s alive and she’s over there.’ It’s very vague now. I don’t know what he’s going to do with it.

Markus also chimed in about the implications of Gamora from 2014 running around in 2023. “I also liked that little dangling piece of time travel,” he said. “The bow wasn’t completely wrapped up and there was a little bit of an after effect from what they did. That doesn’t necessarily affect this movie, and I don’t know how it’s going to affect the coming Guardians, but just leaving some strings, when you’re tying up this many strings, it’s satisfying to know that there are a few still still dangling.”

Ultimately, these sort of story threads never limited the writers while they worked to culminate a story of 23 films while also preserving the opportunity to have more with the characters going forward.

“I’ve never felt hampered,” McFeely said. “Back when I was a high school English teacher, I remember when I taught Robert Frost, hopefully this is attributed to him. He didn’t like blank verse. He liked rhyme scheme and such, because he likened it to playing tennis with a net. If you don’t have a net, what the hell are you doing? I liken having the net, and the net is maybe this guy was frozen in ice and 70 years later he came out and lost all his family. Go. That kind of stuff. I enjoy taking some of the puzzle pieces and then making a new puzzle out of it.”

Avengers: Endgame is available now on blu-ray and digital download.