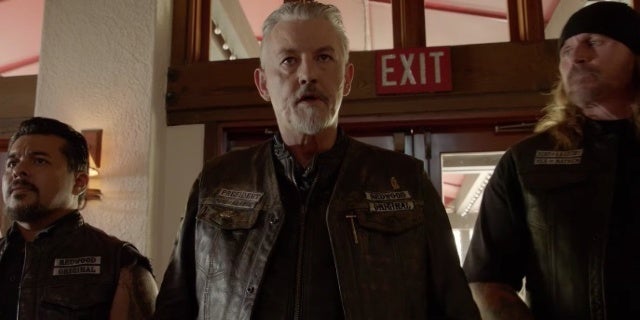 With almost two full seasons in the books, Mayans MC has found multiple opportunities to reference its mothership series, Sons of Anarchy, teasing connections to Jax Teller or including cameos from smaller SOA characters. However, in Tuesday’s new episode, Mayans MC finally went all in on its predecessor’s lore, delivering a full-on Sons of Anarchy crossover. It was teased in last week’s promo that Tommy Flanagan’s Chibs, the current president of SAMCRO, would be appearing on Mayans MC, and his arrival certainly didn’t disappoint.

WARNING: This story contains Major Spoilers from the latest episode of Mayans MC! Continue reading at your own risk…

In the original Sons of Anarchy series, Jax Teller attempted to get his club out of the gun business, a mission that he spent his final days trying to accomplish. The first season of Mayans MC established that the Sons’ exit has taken a little bit longer than expected. Fast forward to this week’s episode where Chibs has called a meeting with the Santo Padre charter of the Mayans.

The long and short of it is this: A port in Northern California is being shut down and the gun trade will need to move south. This means that the Santo Padre charter will have to take part in the business from here on out, alongside a rival club set up nearby. Chibs calls both clubs to the table and attempts to work out their differences in a way that only Chibs can.

Flanagan’s return to the franchise shows that he hasn’t lost a step as Chibs, who has taken over for Jax as the ruler of the MC. He’s just as bold as ever before, not afraid to call any associates out on their issues and taking care of problems immediately. Those who loved Chibs in Sons of Anarchy will absolutely adore his appearance on Mayans MC.

There’s no telling when Chibs will return to Mayans MC, but the door is certainly open for him to come back and help the transition sometime in the future. Hopefully we’ll see Chibs again before Season 2 is over in a couple of weeks.

What did you think of the Sons of Anarchy crossover on Mayans MC? Let us know in the comments!

‘Avatar 2’ Rises To No. 5 On All-Time Global Chart; Will It Overtake ‘Titanic’ Next?
‘Holland, Michigan’ – Gael García Bernal Joins the Cast of ‘Fresh’ Director’s New Thriller
JWST Has Found Life’s Elemental Building Blocks in The Depths of Darkest Space
9 New Albums You Should Listen to Now: Popcaan, Meg Baird, Lil Yachty, and More
Get Your Votes in for the 2023 FANGORIA Chainsaw Awards Now!