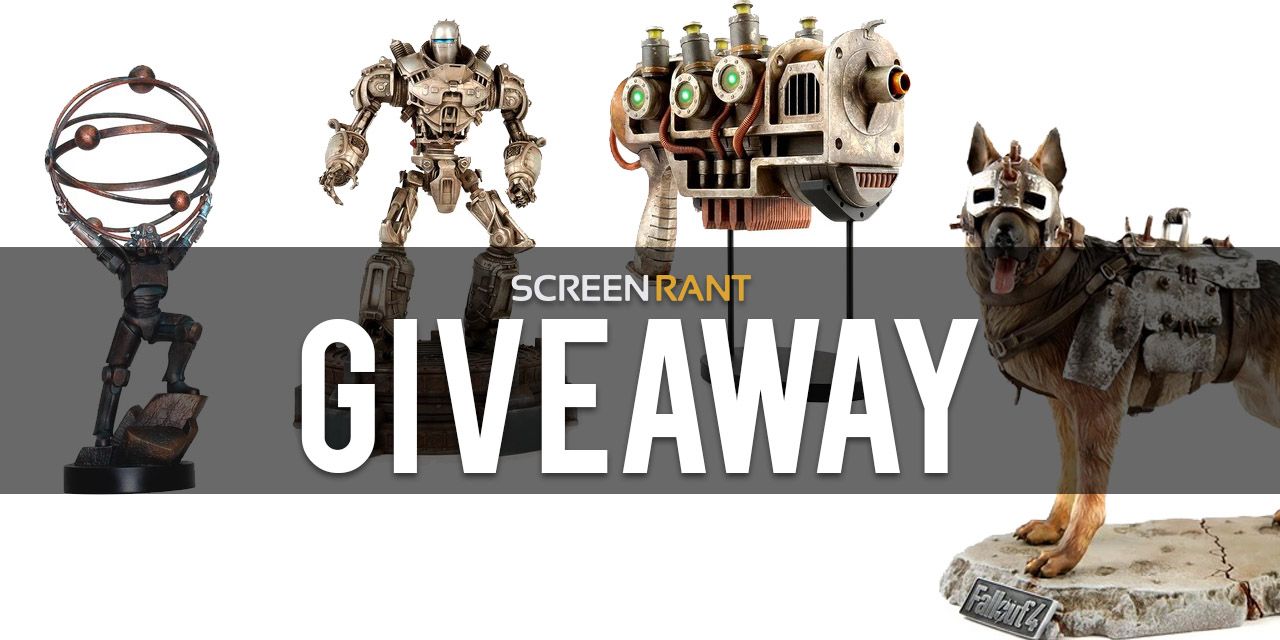 Beginning over 22 years ago, the beloved Fallout franchise took the traditional role-playing formula and flipped it on its head in exploring an entirely different setting. The atompunk themed post-apocalyptic series has since spawned numbers sequels, spinoffs, and jumped into other mediums – including collectibles.

At Screen Rant HQ we got our hands on several high-end must-haves for Fallout fans from Chronicle Collectibles and are giving them away to a pair of lucky Screen Rant readers.

Related: Ranking The Fallout Games, From Worst To Best

Read on for details on how to enter our Fallout Chronicle Collectibles Giveaway!

Two (2) winners of the giveaway will win grand prizes that include:

Eligibility: Open to legal residents of Canada or the USA who are 18 years or older. Void where prohibited or restricted by law. Sponsor, prize supplier and their respective parents, subsidiaries, affiliates, distributors, retailers, sales representatives, advertising and promotion agencies and each of their respective officers, directors and employees (collectively, the “Promotion Entities”), and members of their immediate families and/or persons living in the same household as such persons, are ineligible to enter the Sweepstakes or win a prize.

This 1:6 scale statue was created directly from Bethesda’s 3D assets to ensure 100% authenticity. Dogmeat does come equipped with armor to jump all over those feral ghouls and includes a second armor-free head to be displayed in his playful, non-fighting doggy grin. This limited edition fan-favorite will not stay around long so get yours while you can!

This prop replica was created from Bethesda’s 3D assets for 100% authenticity. This item features LED lights on either side to simulate the microfusion cell spinning up prior to firing and will be crafted from injected plastics for long-time durability. Be sure to pick up extra plasma cartridges so you don’t run out of ammo mid-skirmish with the raiders!

Chronicle Collectibles is proud to bring to life the ultimate commemoration of the Liberty Prime in a scaled statue exclusively made for GameStop and the Official Bethesda Store. This statue was created from Bethesda’s 3D game assets for 100% accuracy and three-dimensionally printed to ensure each detail of the 40’ savior was captured. This limited-edition collectible will not be around for long so get yours before another aerial attack wipes it out.

The Atomic Atlas Statue is seen in Fallout 4® as a depiction of the real-world Greek god Atlas holding the celestial axis on his shoulder, only in this universe where technology and fuel resources control the power, Atlas is shown wearing power armor. This is a perfect example of the ingenuity and cleverness behind building this alternate reality. Chronicle Collectibles is pleased to release this beautiful piece of in-game artwork as a fully produced statue sold exclusively at GameStop and the Official Bethesda Store.

“Chronicle Collectibles is a company of collectors and prop makers with a shared vision of recreating and bringing Hollywood’s most iconic props to life. All of our products are molded, cast or grown from the original puppets, props, studio molds, sculptures and digital files provided by the incredible licensors and talented artists that we have the pleasure of working with.”

Next: 10 Fallout 4 Memes That Are Still Hilarious Today