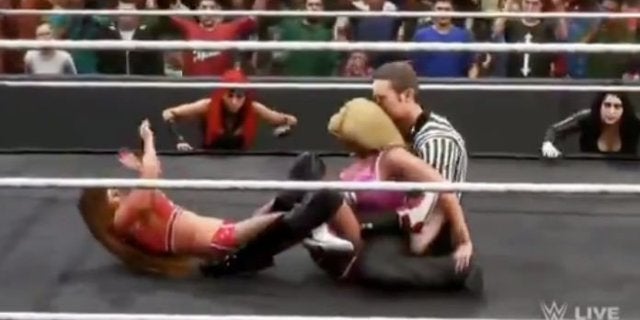 Between early “Bump in the Night” DLC and the focus on the Four Horsewomen, the word surrounding the upcoming WWE 2K20 release has overall been fairly positive. Unfortunately between some questionable wrestler designs, choppy cutscenes segments (by now you’ve probably seen this one) and overall glitching, the game has also received its fair share of criticism leading up to its release on Tuesday. One particular glitch from the game started going viral on Monday from a cutscene involving Charlotte Flair winning the WWE Divas Championship for the first time by beating Nikki Bella at the 2015 Night of Champions.

The scene shows Flair locking in her Figure Eight submission and forcing Bella to tap. Unfortunately with the way the referee was positioned, his character model began to glitch out while the predetermined moment played out in the ring. The result was as hilarious as it was non-PG.

The Referee loves him some Charlotte Flair Woo! #WWE2K20 😂 pic.twitter.com/XL5Syr2XUL

Sadly, neither Flair nor her significant other Andrade commented on the video.

This year’s 2K Showcase centers around the career highlights (so far) of Flair, Becky Lynch, Sasha Banks and Bayley as the Four Horsewomen. Visual Concepts Showcase Designer Dino Zuconi spoke about the ambitions for the mode in a recent interview with ComicBook.com.

“I think our biggest thing was when we first were laying the groundwork out, we went really big with it, and we tried to include maybe a little too much and so we whittled it down and decided to put a better focus on the Four Horsewomen,” Zuconi said. “Once we had that, it was pretty smooth sailing. Me and my team, we had put a big list of matches together, and whittled that back down. So everyone came with the NXT matches, early ones, later ones, and coming up to the main roster. You just try to make what you can make work, work.

“It hurt to cut some of those initial match picks, but overall the mode came out better for it, and there are still plenty of matches for fans to enjoy and a substantial amount of cutscenes interspersed throughout the mode as well,” he added.

He continued: “I think if we had gotten everything we wanted, there was a chance this game would almost be twice as big as it is right now. But I think we made the better calls. We made the cuts where we needed to make them. I think it’s more streamlined. It feels a lot better this way. Give a little bit of focus on all four of the Horsewomen. We have 15 matches. We have 55 cut scenes across those 15 matches. 17 videos. So just like last year, with Daniel Bryan, we have all four of them talking, telling the story, one before each NXT match, as well as an opening video and then a close at the end.”