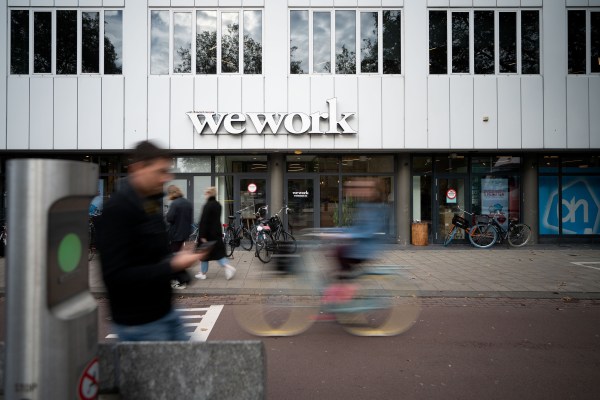 WeWork, once valued at $47 billion, will be worth as little as $7.5 billion on paper as SoftBank takes control of the struggling co-working business, CNBC reports.

SoftBank, a long-time WeWork investor, plans to invest between $4 billion and $5 billion in exchange for new and existing shares, according to CNBC . The deal, expected to be announced as soon as tomorrow, represents a lifeline for WeWork, which is said to be mere weeks from running out of cash and has been shopping several of its assets as it attempts to lessen its cash burn.

To be clear, it is reportedly the Vision Fund’s parent company, SoftBank Group Corp. that is taking control, with SoftBank International chief executive officer Marcelo Claure stepping into to support company management, per reports.

The Japanese telecom giant’s move comes precisely four weeks after co-founder and former chief executive officer Adam Neumann relinquished control of the company and transitioned into a non-executive chairman role and about three weeks after the company decided to delay its highly-anticipated initial public offering. WeWork’s vice chairman Sebastian Gunningham and the company’s president and chief operating officer Artie Minson stepped up to serve as co-CEOs.

In the days and weeks that followed, reports surfaced that WeWork was planning to slash thousands of jobs.

Now expected to go public in 2020 at a valuation, WeWork was also said to be in negotiations with JPMorgan for a last-minute cash infusion. The company, now a cautionary tale, will surely continue to reduce the sky-high costs of its money-losing operation in the upcoming months.

WeWork revealed an unusual IPO prospectus in August after raising more than $8 billion in equity and debt funding. Despite financials that showed losses of nearly $1 billion in the six months ending June 30, the company still managed to accumulate a valuation as high as $47 billion, largely as a result of Neumann’s fundraising abilities.

“As co-founder of WeWork, I am so proud of this team and the incredible company that we have built over the last decade,” Neumann said in a statement confirming his resignation last month. “Our global platform now spans 111 cities in 29 countries, serving more than 527,000 members each day. While our business has never been stronger, in recent weeks, the scrutiny directed toward me has become a significant distraction, and I have decided that it is in the best interest of the company to step down as chief executive. Thank you to my colleagues, our members, our landlord partners, and our investors for continuing to believe in this great business.”

Hayden Panettiere Teases Kirby’s Role in ‘Scream 6’ [Video]
‘The Shining’ Actor Joe Turkel Has Passed Away at 94
This Week in Apps: Period tracking app privacy, Snapchat’s paid subscription, calls for TikTok ban
Sonic Adventure is still the gold standard for 3D Sonic games
We Could Have Been Friends: The Prison of Bitterness in ‘What Ever Happened to Baby Jane?’