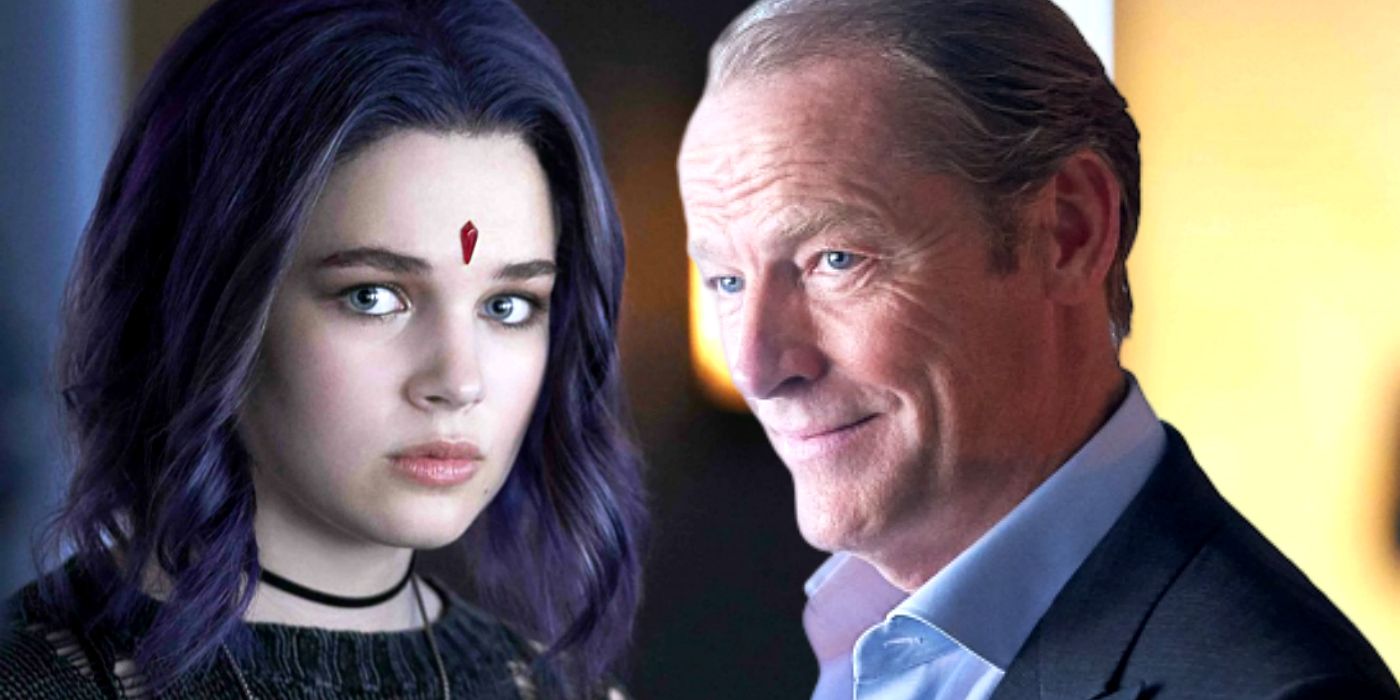 The latest episode of DC Universe’s Titans saw the feud with Deathstroke escalate in a sinister way – and raised a lot of questions about season 2’s future direction. Entitled “Bruce Wayne,” Titans season 2, episode 7 sees Dick Grayson suffer some sort of mental breakdown. He spends most of the episode being taunted by a rather entertaining hallucination of Bruce Wayne.

Meanwhile, back at Titans Tower, Starfire attempts to treat Superboy after he was gunned down by Mercy Graves. And the team return to their default state of bickering with one another, mainly because nobody thought to check whether Deathstroke had actually left the building, and he seems to be rather enjoying himself messing with their heads. At one point, Rose tells Jason Todd that he’s the only one worth talking to in Titans Tower, because at least he doesn’t spend all his time arguing, and instead tries to do something about Deathstroke. Granted, the romantic frisson between Rose and Jason promptly descends into yet more bickering, but that dialogue feels like an accurate summary of the entire episode.

In general, Titans season 2 has been a marked improvement over the first season. Unfortunately, Titans season 2, episode 7 seems to be something of a backwards step, even if the show does finally seem to be preparing to answer some key questions. Let’s look at everything that’s set up.

The A-plot of Titans season 2, episode 7 sees Dick Grayson attempt to track down Deathstroke, all the while haunted by a hallucination of Bruce Wayne. This is certainly Batman as he’s never been seen before, giving voice to all Dick’s self-doubt. Unlike the real Bruce Wayne, Dick’s vision is impulsive and unrestrained, right down to participating in a dance with a pair of strippers. It’s hard not to conclude that Dick’s mind is fracturing under the strain of leading the Titans. Frankly, given the depths of this psychotic episode, he could probably use a stint in Arkham Asylum himself.

10. Did Nobody Think Of Checking Whether Deathstroke Has Left Titans Tower?

Deathstroke was last seen tossing Jason Todd off the side of Titans Tower, but he mysteriously disappeared in Titans season 2, episode 6. Most viewers could be forgiven for assuming that he’d taken advantage of the distraction to escape, but that was an assumption, and it turns out to be incorrect. It seems that Deathstroke stuck around, and he presumably hacked into Titans Tower’s security so he can now come and go as he pleases. Deathstroke uses this access to turn the team against one another with a series of pranks, which are probably intended to be sinister but instead come off as childish.

9. Why Did Everybody Assume Jason Todd Was To Blame For The Pranks?

One of Deathstroke’s tricks in the latest Titans episode is to paint crucifixes in Raven’s room; it’s unclear how he hit upon that idea, but it proves an effective taunt. Raven jumps to the conclusion that Jason is responsible, and confronts him, ignoring the fact he’s still clearly traumatized after his fifteen-story fall. Jason storms off, but the argument escalates in front of the rest of the team. Incredibly, they all assume Raven is correct, and join in the choir of accusations. All this seems pretty left-field, given there’s no evidence Jason ever played any pranks before now.

8. Where Did Jason Todd’s Suicide Plot Come From?

The accusations are the final straw for Jason Todd, who decides the world would be better off without him. His suicide bid is supposed to be a result of the trauma he suffered at Deathstroke’s hands, but it just comes off as somewhat random. The truth is that Jason Todd’s Robin is most famous for his death, so Titans is enjoying teasing viewers with the possibility that this popular character will be killed off.

7. Just What Did Happen To Jericho?

The history of the feud between Deathstroke and the Titans remains a subject of mystery. Titans season 2, episode 4 featured a flashback to five years ago, and it revealed that Deathstroke was hired to commit an assassination in San Francisco. He appears to have targeted Wonder Girl, but Aqualad wound up in the line of fire. That episode ended with Dick Grayson successfully tracking down Deathstroke’s son, Jericho, and introducing himself.

Titans season 2, episode 7 sees Rose realize that some of Jericho’s records are in Titans Tower. She’d previously been told that her brother fell in with the wrong crowd, a group who wanted to use him to get to Deathstroke, and that he was killed. Now she rightly deduces that the Titans themselves were the aforementioned “wrong crowd.” As the episode continues, Dick Grayson’s arguments with the hallucinatory Bruce Wayne suggest the rest of the team had nothing to do with whatever happened to Jericho. Finally, at the end of Titans season 2, episode 7, Dick admits to Jason that he was the one who killed the kid.

6. Why Was Rose’s Reaction To Jericho So Delayed?

Rose freaks out when she realizes that the Titans were connected to her brother, but frankly her reaction seems rather odd. She heard the OG Titans talking about Jericho in Titans season 2, episode 5, and didn’t react at all. Presumably she was focused on the question of whether or not Hawk would give her up to Deathstroke, and didn’t notice the reference to her dead brother. It all feels rather odd.

5. Why Did Mercy Just Assume Superboy Was Dead?

Elsewhere on Titans, Mercy Graves – Lex Luthor’s top agent – believes she’s killed Superboy after shooting him with a Kryptonite bullet. Strangely, though, she has no interest in checking whether or not her assassination attempt was successful; she’s content to assume Superboy is dead. That’s even odder when you remember that she last saw Superboy in the company of Robin, which means she knows he’s been picked up by superheroes. Would Lex Luthor really like a clone he’s had created to be in Batman’s hands?

4. Why Do Tamareans Learn Kryptonian?

Mercy is wrong, of course; Superboy may be critically injured, but he’s far from dead. In one scene from Titans season 2, episode 7, Superboy awakes from a coma and – completely delirious – speaks Kryptonian. Starfire is able to respond in kind, simply because Kryptonian is a dead language that Tamareans learn, presumably an alien equivalent to Latin. This is actually something of a clever nod to the comics, where Starfire has the ability to learn any language – by kissing someone who knows that language.

3. How Does Starfire Heal Superboy?

Fortunately for Superboy, his creator Eve manages to escape Mercy Graves, and she rushes to Titans Tower to treat him. At first Eve despairs, believing there’s too much trace Kryptonite in Superboy’s system and he’d need a massive amount of solar energy to boost his resistance., Starfire is able to generate the same kind of energy burst as a small star, and she gives Superboy the energy burst he needs to recover. It raises the interesting question of just how powerful Starfire really is; Titans has clearly only hinted at her true power levels to date.

2. Just How Powerful Is Raven?

Titans season 2, episode 7 shows the first true teamwork in the entire series, with Starfire and Raven using their powers in unison to heal Superboy. Starfire is aware that she’d destroy the tower if she unleashed the energy Superboy needs, and so she requires Raven to create a protective sheathe. Interestingly, Raven’s powers seem to match Starfire’s, successfully restraining the starburst. If Starfire is powerful, then Raven is her equal.

1. Will Next Week’s Be Another Flashback Episode?

There’s another minor cliffhanger ending at the close of Titans season 2, episode 7, with Dick Grayson attempting to talk Jason Todd out of his suicide attempt by finally telling the truth about what happened five years ago. It’s reasonable to assume this means episode 8 will be another flashback episode, given Titans season 2 seems to prefer showing to telling.