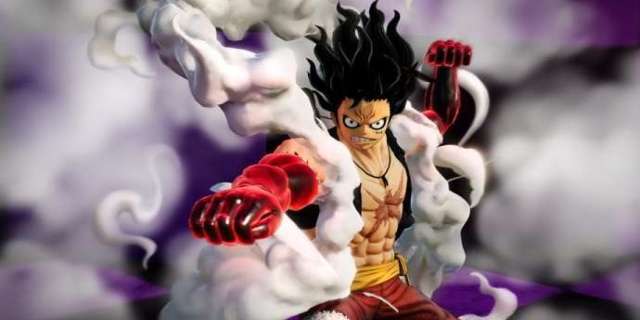 One Piece has had a slew of video games that have explored nearly every arc and battle that the Straw Hat Pirates have found themselves a part of. Now, with the current story arc of Wano Country being one of the biggest for Monkey D. Luffy and his crew, it’s no surprise to see that the next installment of the anime franchise’s video games will dive right into it with the upcoming One Piece Pirate Warriors 4. To add a cherry on the top of the upcoming game, Bandai Namco has revealed, via press release, that the current most power transformation of Luffy will be making an appearance with his “Fourth Gear”.

Luffy’s most recent transformation is a big one, as each of his “gear levels” gives him not just new powers, but completely elevated strength to boot. With the “Fourth Gear”, Luffy once again finds a brand new way to make amazing use of his Devil Fruit imbued abilities. Though the newest transformation gives Monkey a gigantic power upgrade, we’ll have to see what the drawbacks, if any, are for it.

The Pirate Warriors games are somewhat modeled after the Dynasty Warriors formula, wherein a character is completely swamped in enemies to attack, with hundreds if not thousands of enemies being blown away with the hero’s attacks. This upcoming One Piece game follows the formula once again, allowing players to control the Straw Hat Pirates and their allies, knocking away enemies in Wano Country as if they were fleas!

Will you be picking up the next One Piece video game? What’s been your favorite game so far featuring the Straw Hat Pirates? Feel free to let us know in the comments or hit me up directly on Twitter @EVComedy to talk all things comics, anime, and the Grand Line!

One Piece Pirate Warriors 4 is in development for PS4, Xbox One, PC, and Nintendo Switch. At the moment of publishing, there’s been no word of any additional ports or a release date beyond sometime next year. Below, you can read more about the title, courtesy of an official overview from Bandai Namco itself:

“The Pirate Warriors are back and bring with them a more explosive story, more environments and even crazier attacks in One Piece: Pirate Warriors 4. Follow Luffy and the Straw Hats from the beginning as they make their journey through different islands and onwards in the hopes of finding the illustrious treasure—the One Piece. Play through some of the most extraordinary areas in the One Piece story.

“Choose from some of your favorite characters and take on a vast number of enemies through iconic moments from the One Piece anime. Developed by the masters of the action musou genre, Koei Tecmo Games, One Piece: Pirate Warriors 4 brings together the excitement from slashing hordes of enemies with the fun and energetic personalities from the One Piece series. Set sail on a new pirate warriors adventure.”