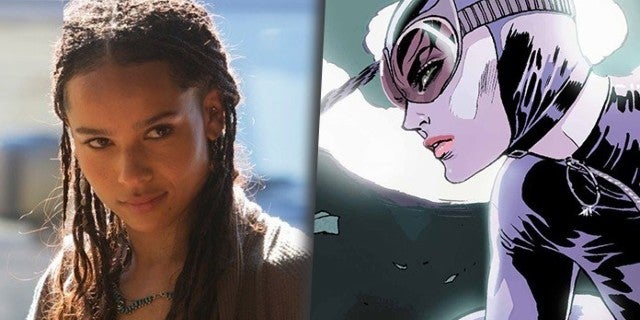 The cast of Matt Reeves’ upcoming The Batman got a bit larger on Monday when it was announced that Zoe Kravitz had been cast to play Batman’s foil and love interest Selina Kyle, aka Catwoman opposite Robert Pattinson in the film. The casting announcement comes after previous reports that Reeves was looking to cast an actress of color for the iconic role, a search that ultimately led them to Kravitz. However, while the actual casting announcement was a bit of a surprise for fans a photo Kravitz herself posted on Instagram in September now has people wondering if she was teasing her Catwoman role even back then.

Back on September 15, Kravitz shared a black and white photo of herself standing against a brick wall. The photo, which is credited to Gus Van Sant, is part of a series of mostly black and white photos Kravitz shared over the course of about a week in September, but this one in particular is noteworthy because of the shirt she’s wearing as it bears a vintage 1970s Batman logo. Check it out for yourself below.

The timing of that post is pretty interesting. In September it was reported that Reeves had started to put out feelers for actresses who would be a good fit for Catwoman role as well as that Kravitz would the ideal choice. Then, in early October, it was reported that Reeves and Warner Bros. were very interested in casting an actress of color in the role. While the report hit in early October, when you consider the September report it sounds like that particular casting search was already well underway and that Kravitz may have had an idea she was at least a major contender for the role at the time the photo was posted.

Of course, the photo tease is simply speculation. Realistically we don’t know exactly when that photo was actually taken, just when it was posted. What we do know definitively is that Kravitz will be playing the character in The Batman. Reeves himself chimed in on Twitter with a gif of Kravitz, essentially confirming the news of her casting in the role — a move very similar to what he did when Robert Pattinson was cast in the film’s titular role.

Now it’s your turn: do you think Kravitz was teasing her Catwoman casting last month? Are you excited to see her play the role in The Batman? Let us know in the comments below.