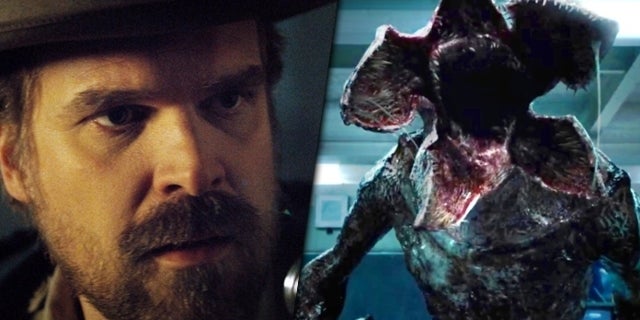 David Harbour started off his appearance on SNL with a very unconventional monologue when compared to the other guests this season. A large homage to Stranger Things’ Upside Down comprised the majority of his big opener, and he even managed to address Hopper’s status after that dramatic finish to Season 3. SNL making the choice to go this route is a no-brainer after that ending, and they made the most of their chance with this one. He casually strolled around the studio before inevitably getting dragged into helping the cast members who could be in danger after tumbling through that portal. Not to worry, this version of the realm isn’t nearly as scary as the one that fans of the show have grown accustomed to. Gone is the sheer terror that accompanies the chilling visuals and in come some sort of hilarious Halloween store effects that easily convey what is going on the moment Harbour steps through a decidedly low-tech portal.

Right out of the gate, the actor runs into Aidy Bryant but mistakes her for the tragically departed Barb before moving on. He bumps into a couple more cast members and someone who is in the process of being engulfed. Then comes the biggest surprise so far, Pete Davidson is in the house, fresh off of filming The Suicide Squad earlier this week. The crowd is loving the sudden return and then the two start a bit of small talk with Harbour wondering if the comedian is freaked out by The Upside Down. Davidson quickly responds that he’s having a great time, “It’s Lit!” Of course, they couldn’t pass up the chance to discuss Hopper’s fate after Stranger Things 3. Harbour answers but remains non-committal about his status heading into Stranger Things 4. “No, I don’t…I’m not exactly authorized…Just watch the show next season.” Then he has to scurry off to see what other surprises are waiting down there for him.

“Ever since the moment fans’ binge sessions ended, people have been wondering what’s going to happen to Hopper. Comicbook.com actually had a chance to speak to the actor earlier this summer, and Harbour wasn’t gonna give up the goods so easily. No overt statements were made, but he definitely left the door open to rejoining the cast for the fourth outing. He even mentioned that fans might want to take a fresh look at the previous season before crafting their theories.

“There’s always discussion on set about kicking around ideas about what would be cool and stuff, but there’s a lot of stuff that goes down in season three that you’re going to want to pay attention to before you start thinking at all about the future,” Harbour said in the interview. “They pulled no punches with the season, and it’s a big deal what goes down. So you really have to watch this before you start even speculating.”

The future is never a fixed thing, but especially around Stranger Things. It seems like just about anything is possible near Hawkins if you look hard enough. Hopper left no concrete evidence of his demise or a clear path back to the main cast. He’s out there somewhere and answers aren’t going to be headed fans way until Stranger Things 4 is here, so speculate away in the meantime.

Upcoming 1.9 Update for ‘Hunt: Showdown’ Introduces Black Market, Weapon Changes and More
This wild proposition of a mirror universe could help solve the cosmology crisis
Book Riot’s Deals of the Day for July 6, 2022
AI seems to be better at distributing wealth than humans are, study hints
Stressed? 4 ways to stop your brain from telling you the worst will happen